Originally Written and Posted at Epinions.com on 12/21/04 w/ Additional Edits. 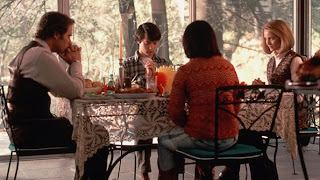 One of the more recent prolific directors in cinema, Taiwan-born Ang Lee has made films in his homeland whether it was the dramas Eat Drink Man Woman and The Wedding Banquet or the martial-arts masterpiece Crouching Tiger, Hidden Dragon. Yet, he's also ventured into the world of Hollywood with the Civil War drama Ride with the Devil, the Jane Austen adaptation of Sense & Sensibility, and more recently, a big-budget action flick with Hulk. In 1997, Lee goes to the early 1970s in America where the age of cynicism begins as the ideals of American family life begins to disintegrate based on a novel by Rick Moody entitled The Ice Storm.

Adapted into a script by producer James Schamus, The Ice Storm is a family drama about a man and wife whose perfectly good marriage disintegrates as the man has an affair with his neighbor while his wife is trying to find fulfillment in her boring role as a housewife. Meanwhile, their children begin to explore sexuality and angst while looking at the world through their own sense of cynicism around Thanksgiving in 1973. With its central characters trying to find something, they realize that what they seek isn't, as it seems when tragedy collides through one night on an icy storm. Starring Kevin Kline, Joan Allen, Sigourney Weaver, Jamey Sheridan, Henry Czerny, Allison Janney, Tobey Maguire, Katie Holmes, Christina Ricci, Elijah Wood, and Adam Hann-Byrd. The Ice Storm is a brilliant, provocative drama from Ang Lee and company.

16-year old Paul Hood (Tobey Maguire) is at a NYC prep school where he's become attracted to his classmate Libbets Casey (Katie Holmes).  Paul yearns to win her affections before his lothario roommate Francis (David Krumholtz) can.  Paul's family lives a small town in Connecticut as his parents Ben (Kevin Kline) and Elena (Joan Allen) are preparing for Thanksgiving with Paul set to return.  Paul's 14-year old sister Wendy (Christina Ricci) becomes intrigued by the Watergate scandal which prompts her to gain a cynical view on the world.  Ben and Elena eat dinner with Jim (Jamey Sheridan) and Janey Carver (Sigourney Weaver) where Elena begins to suspect something isn't right in her marriage in the way Ben eyes Janey.  Even as she begins to reminisce her own childhood when she saw Wendy ride a bike during a book sale where the local minister (Michael Cumpsty) attends.

Ben spends part of his time at work with rival George Clair (Henry Czerny) while his off-time sleeping with Janey while Wendy spends time with Janey's eldest son Mikey (Elijah Wood).  Mikey's younger brother Sandy (Adam Hann-Byrd) is reaching adolescents as he blows up toys and discovering sex when Wendy tries to expose herself.  Wendy's time with Mikey eventually leads to trouble as Mikey becomes more aloof towards the world.  When Paul returns home for Thanksgiving, things become chaotic when Wendy spouts remarks towards the U.S. government during grace.  Elena learns that their friend Dot Halford (Allison Janney) is throwing a party the next day as she and Ben reluctantly attend.  Paul goes to New York City to attend a party Francis is holding as Libbets is there where things don't go well as Paul hopes for.

At the Halford party, Ben and Elena learn it's a key party as the Carvers also attend where Elena decides to get into the party where things unravel.  Wendy decides to go see Sandy while Mikey roams outside during the cold November night where a night of party and intrigue becomes tragic.

What makes The Ice Storm such a compelling film is Ang Lee's approach to storytelling. Taking Schamus' wonderfully structured screenplay, the film builds up to a certain momentum where by the second half when the Hoods go to the party is where everything begins it sense of deconstruction. While the film has a lot of sexuality, there isn't any nudity shown but it doesn't matter with this film since Lee is playing an outsider in trying to discover what drives these people into behaving the way they act. Is it the cynicism that is surrounded by the American government or the idea that the American dream and ideal is over? The film plays well with its morals and strange parallels in the scenes where Tobey McGuire's Paul characters is reading The Fantastic Four while comparing it to his own family life. Lee's breathtaking directing style works very well in each frame, notably the scene where Elijah Wood's Mikey is running around on the icy grass in slow motion. It's clearly one of the most masterful and evocative presentation in film.

Helping Lee in that breathtaking vision is cinematographer Frederick Elmes in capturing the evocative world of the 1970s with scenes of bike riding and notably the night scene of the ice storm itself with its idiosyncratic approach to lighting. Editor Tim Squyres also brings that same idiosyncratic style in the film's structure with its editing sequences where the film not only has a nice pacing but the way the scenes of its characters are moved back and forth. Production designer Mark Friedberg and art director Bob Shaw also help in the film with a grand, very detailed look of the 1970s with its furniture and appliances along with the waterbed. Costume designers Carol Oditz and Elizabeth Shelton also help out with the film's look with a great detail on the costumes and clothing in the film that really gives that 1970s authenticity.

Atom Egoyan's longtime composer Mychael Danna also shines with his eerie, melancholic film score with his use of morose piano sequences and eerie, evocative flute playing while music director Alex Steyermark shines with his soundtrack of the film that includes Elton John, Jim Croce, and many more including a haunting ballad from David Bowie redoing his song I Can't Read from his work with Tin Machine.

The film has a great cast overall with fine, small performances from Allison Janney, David Krumholtz and a sleazy one from Henry Czerny as Kline's rival. Michael Cumpsty also stands out as a minister where in the party scene, we see for what he really is which proves that no one in the film is safe. Katie Holmes shines in one of her early performances as Libbets with cute sexiness and the ability to play stoned. Jamey Sheridan is the film's most quiet performance as Sigourney Weaver's husband who is often gone in his life and yet, he gains sympathy during the party scene. Sheridan shines in his clueless role of husband and father while he and Joan Allen have great scenes together.

Adam Hann-Byrd also stands out as the more innocent but angst-ridden Sandy with his curious approach to his performance that is really amazing to watch. Elijah Wood is wonderful in a performance that marks a transition from child actor to a more determined young thespian as the more offbeat and quirky Mikey. Wood's stoned out performance represents as a young man who is trying to find more in life away from sex and family while presenting a distance from reality in a performance that is awe-struck. Christina Ricci also brings in a transitional performance by being a sexy cynic who tries to figure out sex and ways to anger her own parents in a performance that is intimidating yet enchanting. Tobey Maguire is excellent in his role as narrator along with the clueless family patriarch who doesn't know what goes on in his town in favor of his own desires. It's a great and mature performance from the young Maguire while proving himself as a gentlemen and dreamer.

Sigourney Weaver is wonderfully cold in an amazing performance as Janey Carver with her vivacious sexiness and an awful selfishness that is very complex. Weaver's character may have been the most unlikable but it's also the most intriguing as we see a woman who is trying to fulfill her own needs by having affairs while she begins to slip away from what is really important. This is truly one of Weaver's most enduring performances. Kevin Kline is also amazing as the bored, commanding father and husband who seeks to have this affair with Janey as if it's the greatest thing for his own sexual needs that isn't at home. Yet, his character begins to disintegrate in the party scene where Kline really shines in his dramatic stature.

The film's best performance goes to Joan Allen as Kline's anguished wife who is trying to find her own niche into the cynicism of the 70s. Allen brings a subtlety and calmness early in the film but by the second act, she makes her character sympathetic but not a martyr as she tries to explore her own sexual needs while trying to deal with what's going on with her children and the world around her. It's a great performance from the always, underrated veteran actress.

The Ice Storm is a compelling film from Ang Lee thanks to Lee's eerie direction, James Schamus' Cannes Film Festival award-winning script, a dedicated crew, and a superb cast. In many ways, The Ice Storm wasn't just a film of the 1970s but also what was going on in the late 1990s where the dysfunctions of families become more evident and later in 1999; Sam Mendes' American Beauty will fulfill the boredom of suburbia. The credit really goes to Lee, Schamus, and novelist Rick Moody for capturing the world of American culture in its decline through cynicism and angst in the 1970s when everything begins to go wrong. The Ice Storm is one film not to be missed.