Originally Written and Posted at Epinions.com on 10/18/05 w/ Extensive Revisions. 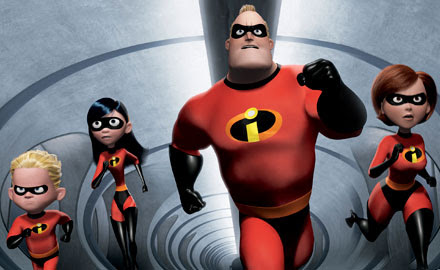 Superheroes is something everyone seems to love. Whether it's Superman, Batman, Spider-Man, or Wonder Woman. The idea of them fighting against evil for the sake of good is something everyone can root for. Still, if there was anything that comic book readers loved about them, it was the fact that each superhero can bring something like a flaw in which the character can be more relatable in terms of its humanity. That was something Spider-Man and its sequel director Sam Raimi along with Christopher Nolan of the recent film Batman Begins have found. Spider-Man and Peter Parker struggle with the every day life of their existence while Bruce Wayne struggles with the death of his parents and his fears that would lead him to become Batman. This was something animated film director Brad Bird seemed to love. One of the masterminds of such Pixar/Disney computer-animated hits as Toy Story/Toy Story 2, A Bug's Life, Monsters Inc., and 2003's Finding Nemo, Bird returned to his format in 2004 for his next project, The Incredibles.

Written and directed by Brad Bird, The Incredibles is about two former superheroes who are forced into retirement after a series of lawsuits who now live in a domestic lifestyle with their children, who also have superpowers. When the father is called for help, he comes out of retirement only to find himself captured as his wife and children come to save him and the world. Basing on ideas from The Fantastic Four comic as well as other superhero stories, Bird creates a wonderful family film filled with dazzling animation and human characters that audiences can relate to and enjoy watching. With the voices of Craig T. Nelson, Holly Hunter, Samuel L. Jackson, Elizabeth Pena, and Jason Lee. The Incredibles is a spectacular masterpiece from Brad Bird who makes an accessible, entertaining family film that satisfies its core audiences as well as superhero fanatics.

Mr. Incredible (Craig T. Nelson) prides in being a superhero with super-strength as he is about to marry the elastic-reaching Elastigirl (Holly Hunter).  What should've been a great time is shattered when Mr. Incredible is sued for injuring a man trying to kill himself.  In turn, a slew of lawsuits forced superheroes to go out of business.  Mr. Incredible returns to his original name Robert Parr as he becomes an unhappy insurance salesman who has to deal with an angry boss (Wallace Shawn).  While his wife Helen has settled into role of being a housewife with three kids, Robert isn't happy.  Even as their two older kids in Violet (Sarah Vowell) and Dash (Spencer Fox) each have their own powers while the baby Jack-Jack still hasn't attained any.  The only other superhero Robert and Helen talk to is Lucius Best/Frozone (Samuel L. Jackson) who reluctantly does hero work with Robert at times.

With Robert having his own issues about his dour work-life, he meets a mysterious woman named Mirage (Elizabeth Pena) who asks him to stop a robot in a remote island for a secret mission.  Robert accepts the part as Mr. Incredible as it gives him some happiness as he turns to legendary costume designer Edna Mode (Brad Bird) to create a new costume.  When accepting a new mission from Mirage, he battles a new robot that is under the control of a man named Syndrome (Jason Lee) who is revealed to be a former fan of Mr. Incredible.  During his battle with Syndrome, Robert learns what happened to other former superheroes as he's eventually captured.  After learning what Robert had been doing, Helen meets Edna who has created new suits for Helen and the kids.  Helen reluctantly goes into a mission to save Robert as she learns that Violet and Dash hid in the plane as they're attacked by Syndrome's missiles.

Though Helen and the kids were able to survive and make it to the island, Helen goes on a mission to save her husband while Dash, with his super-speed, and Violet, with her invisibility and to project force fields, fend off against Syndrome's forces.  After the whole family learns what Syndrome is up to with his robot, it's up to the Incredibles to save the day.

The formula of the superhero film is predictable but for a family feature, it's expected and it works. Bird's approach like the previous film versions of Batman and Spider-Man was to show superheroes with flaws and humanistic qualities. The film's story has a lot of ideas of dysfunctional families, boredom over the corporate world, and how pride can really overshadow what's really important. Aside from a lot of the dramatic textures of the film, it's got a lot of humor and action. Bird brings in some action that is in the level of action films but they’re used in a fun way. Bird's direction is filled with a lot of moments where the film is a lot of fun with characters that everyone can relate to.

It's in Bird's writing and directing that gives the film a feeling that the audience can relate to. A teenager who feels very insecure, a man who feels like a failure, a boy who wants to use his powers to be in some group, and a woman who is in denial by living in a role. Plus, you have a villain in the film who is very arrogant but is extremely funny as well as someone who knows how to push people and expose their weaknesses. It's smart writing that appeals to a mass audience while giving the characters some great development.

The film in its digital, computer animation is wonderfully done with every detail on the characters from their hair to their expression. Even with a nod to old school Disney two-dimensional animator Ollie Johnston and Frank Thomas who both make cameos in the film. The film looks amazing from its animation style to the detail in the production from production designer Lou Romano and art director Ralph Eggleston along with the trio of cinematographers in Andrew Jiminez, Patrick Lin, and Janet Lucroy who all do an amazing job of the lighting. The editing of Stephen Schaffer works well and in style along with the sound design of Randy Thom. One great element of the film is Michael Giacchino that has a nice jazzy, upbeat score that has a nice theme that gives the film a nice feel and rhythm.

The choice for the voice casting is inspiring, notably Brad Bird in the role of Edna. Originally was given to Lily Tomlin, Tomlin felt Bird got the voice right by himself that he ended up voicing the character. Edna in every scene is a scene-stealer with her talk about why she hates capes and her love for superheroes. Wallace Shawn makes a great cameo as Robert Parr's boss along with Pixar regular John Ratzenberger and Dominique Louis as enemies of Mr. Incredible.  Elizabeth Pena is excellent as the sliver Mirage who coaxes Mr. Incredible to get into an experiment. Jason Lee gives the right voice and tone for the crazed, arrogant Syndrome with his desire to destroy the supers and be the only superhero with his gadgets.

Samuel L. Jackson is the epitome of cool as Frozone as he delivers one of the most hilarious lines in the film as he gives many superhero fans a real need for a cool, African-American superhero. Sarah Vowell brings the right tone to the insecure, angst-ridden Violet while Spencer Fox gives the right energy for Dash. Holly Hunter is perfect for Elastigirl with her fiery personality and maternal role. Craig T. Nelson is also perfect as the pride-driven and frustrated Mr. Incredible.

For fans of Disney/Pixar films and superhero films will definitely enjoy The Incredibles. Led by the creative mind of Brad Bird and his team, this film is certainly another classic film in the collection of previous Disney/Pixar collaborations. The film has enough action, drama, and comedy that will make anyone desire for a sequel to the film. For a family audience, this is one film to enjoy since it's about family and their dysfunctions and their ability to work together. For a film that has something for everyone, The Incredibles is the film to watch.

I watched this again and it still holds up. The action, the characters, the story are all awesome. I had no idea that Lily Tomlin was asked to be the voice of Edna. It makes sense because she does look like her. Now where the hell is that sequel.

That's what I want to know. A sequel would be awesome.