The Spirit of the Beehive

Originally Written and Posted at Epinions.com on 10/31/08. 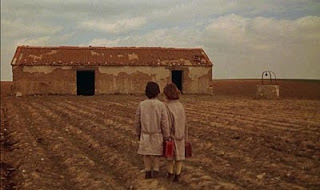 When Mexican director Guillermo del Toro released the widely acclaimed film El Laberinto del Fauno (Pan's Labyrinth) in 2006, del Toro acknowledged the influence of Spanish director Victor Erice. Though he's only made three feature films in his entire career, he is considered to be one of the influential Spanish film directors to come out of that country since Luis Bunuel. In 1973, Erice released his seminal debut feature about a six-year-old girl whose life would change after seeing the film Frankenstein in her rural small town entitled El Espiritu de la Colmena (The Spirit of the Beehive).

Directed by Victor Erice with a script he co-wrote with Angel Fernandez Santos and Francisco J. Querejeta , El Espiritu de la Colmena is about a young girl in 1940 rural Spain whose life would change when she sees a screening of Frankenstein as she becomes possessed by its images. Set after the Spanish Civil War, the film explores the development of a young girl as her perception of reality blurs. Starring Ana Torrent, Fernando Fernan Gomez, Teresa Gimpera, and Isabel Telleria. El Espiritu de la Colmena is a gorgeous yet haunting film from Victor Erice.

It's 1940 in rural Spain where a truck is carrying some movies to play at the local city hall to an excited group of children. The film to played for the day is James Whale's Frankenstein as adults and children watch the film. Transfixed by its images is a shy, six-year old girl named Ana (Ana Torrent). Along with her older sister Isabel (Isabel Telleria), they see this film while their mother Teresa (Teresa Gimpera) writes a letter to a long-lost lover she had many years ago. The girls' father Fernando (Fernando Fernan Gomez) is an aging beekeeper which he often writes about. Later that night, Ana asks her sister about the Frankenstein monster where Isabel reveals that it's no monster but a spirit.

Ana's curiosity that the monster could be real leads her and Isabel to an abandoned sheepfold where they believe the monster lives in there. Yet, Ana finds a footprint as her curiosity increases. During a day with their father, they learn a lesson about mushrooms as Ana is given a lesson about life and its fallacies. When Isabel plays a trick on Ana, Ana's fascination over the monster ends up taking Isabel's prank seriously until she realize it was a prank. Ana's idea of fantasy and reality blurs when a fugitive soldier (Juan Margallo) arrives into the sheepfold. Ana befriends the man through silent dialogue but he is suddenly killed by some soldiers. Ana returns to the sheepfold where she's shocked in what she sees as her idea of fantasy and reality is blurred even more right to the end.

The film is just a simple tale about a young girl transfixed by a film and her fascination with the world of spiritual beings. It's also a film about life and death in all of its mysteries. While the film isn't very plot driven, it's more about curiosity from the mind of a young girl and how she's enamored with this film. Victor Erice and co-writer Angel Fernandez Santos create a story that's about a child being enamored by all of these ideas of spiritual beings and death. While the script is more loose in its storytelling, Erice's directing is truly superb and imaginative.

While some might compare him to reknowned American auteur Terrence Malick both visually and on a personal level considering that both directors don't make films very frequently. Erice, like Malick, creates natural images and shots of huge landscapes to create a feel that is gorgeous with a pacing style that's elliptical in letting the story unfold for its characters. Unlike Malick, Erice is more in tune with a spiritual tale as he, like the character of Ana, prefers to remain curious in what might happen. With a lot of long shots and gorgeous compositions, Erice creates a film that is truly magical and haunting.

Cinematographer Luis Cuadrado, who was going blind during production, creates a gorgeous look with naturalistic, colorful exterior shots that are wide and epic in its imagery. The interior look with the use of the sun and lights are awashed with sepia colors and shading as the cinematography is truly exquisite to look at in every frame. Editor Pablo Gonzalez del Amo creates amazing work in the editing with uses of jump cuts, dissolves from day to night in some sequences, and smooth transitions to give the film a fluid, transcendental feel. Art director Jaime Chavarri and set decorator Aldolfo Cofino create a great look at the home of Ana and Isabel in its natural, Spanish-tile look. Costume designer Peris does excellent work with the film's costume to give it a 1940s look and feel that matches the look of the entire film.

Makeup artist Ramon de Diego does excellent work in creating makeup for the look of the monster that Ana seems intrigued by late into the film. Sound effects team Luis Castro and Jean Michel Sire create unique sound work for horror and dramatic tension to help with the film's eerie mood. The music of Luis de Pablo is brilliant in its melodic, flute-driven score to play up the film's sense of innocence and haunting tone with other woodwinds.

The cast is excellent with notable small roles from Estanis Gonzalez as the chief inspector, Miguel Picazo as the doctor, Laly Soldevila as the girls' schoolteacher, Ketty de la Camara as the maid, Juan Margallo as the fugitive, and playing the monster near the end of the film is Jose Villasante. Teresa Gimpera is excellent as the girls' mother who seems to be longing for a lost love as she drifts into her fantasy world while being devoted to her husband. Isabel Telleria is great as the older sister who increases Ana's intrigue in the supernatural while trying to play a prank on her that only furthers Ana's interest. Fernando Fernan Gomez is superb as the father who shows Ana and Isabel the fallacy about life and death as he examines his own world of beehives and nature.

The film's best performance is Ana Torrent as Ana, the girl who is intrigued by the film Frankenstein. Torrent's performance is amazing for a young girl as her observant and innocent curiosity drives the film as she takes the audience into a journey. With very little dialogue, her performance is mesmerizing from start to finish as it's clear that it's the heart of the film as Torrent brings a performance like no other. It should also be noted that she helped create the film's opening credit sequence of children's drawings as well.

El Espiritu de la Colmena is a gorgeous, haunting, and imaginative film from Victor Erice. Fans of Spanish cinema will no doubt consider this essential while those new to Spain's great film work will see this as a great introduction. Audiences intrigued by some of the art films of Guillermo del Toro will see where he gets his influence. Thanks to a great cast led by Ana Torrent along with exquisite cinematography and a mesmerizing film score. El Espiritu de la Colmena is a film that revels in the power of imagination from the mind of a child.

That's a fascinating tidbit that the cinematographer was actually going blind during this film. I did get a sense that the image was usually dim and muted, and found it a curious choice.

A really good film. Looking forward to seeing more of his work.

My mother and grandmother recently saw the film that I had recorded for them and they really liked it.

I too want to see more of Victor Erice's work but they're not easy to find. I'm very interested in his work and the fact that he doesn't make a film very often like Terrence Malick himself.