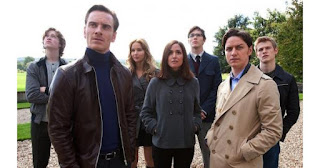 When the X-Men film franchise arrived in 2000 under the direction of Bryan Singer, the first film helped created a new wave of films based on comic book-created superheroes. 2003’s sequel X2: X-Men United was considered to be the best of the franchise as Singer brought more legitimacy to the franchise. Then, Singer left to do 2006’s Superman Returns as the franchise was taken over by Brett Ratner for 2006’s X-Men 3: The Last Stand which drew very mixed reviews from fans and critics. Then came 2009’s prequel, X-Men Origins: Wolverine that many considered to be the worst as a planned origins story on Magneto was scrapped in favor of another origins story about Magneto’s friendship with Charles Xavier for X-Men: First Class.

X-Men: First Class tells the story of how Erik Lehnsherr/Magneto and Charles Xavier/Professor X first met along with the formation of the X-Men and how their relationship dissolved as the whole film is set primarily in the 1960s. Helming the film is Matthew Vaughn of Layer Cake and Kick-Ass fame as he co-writes the script with longtime collaborator Jane Goldman along with Ashley Edward Miller and Zack Stentz that is based on a story from Bryan Singer and Sheldon Turner. The film is a part origins story about Xavier and Lehnsherr but also introduces mutants that would be part of the series. Starring James McAvoy, Michael Fassbender, Jennifer Lawrence, Rose Byrne, Nicholas Hoult, January Jones, Oliver Platt, Zoe Kravitz, Jason Flemying, and Kevin Bacon. X-Men: First Class is a good and entertaining film from Matthew Vaughn.

It’s the 1960s as the Cold War is brewing as Sebastian Shaw (Kevin Bacon) is planning to get World War III started by convincing Colonel Hendry (Glenn Morshower) to put missiles in Turkey. Yet, Shaw’s real name is Schmidt who had been a German professor during World War II as a man named Erik Lensherr (Michael Fassbender) is trying to find him. Meanwhile in England, Charles Xavier (James McAvoy) has graduated from Oxford as he’s joined by his adopted sister Raven (Jennifer Lawrence) where they meet a CIA agent named Moira MacTaggert (Rose Byrne) who asks for their help against Shaw. During a failed attack against Shaw’s ship, Charles meets Erik who had been trying to attack Shaw.

While CIA director McCone (Matt Craven) isn’t sure about using mutants to battle against the energy-absorbing Shaw. He ask MacTaggert and another agent (Oliver Platt) to aid Xavier to get things ready against Shaw with help from Lensherr and Raven as they meet Hank McCoy (Nicholas Hoult) who has feet different from humans. McCoy introduces Xavier and Lensherr to new gadgets including a machine called Cerebro to increase Xavier’s telepathy as he tracks down mutants to join their team. After the search, Xavier and Lensherr along with MacTaggert go to the Soviet Union to see if Shaw would arrive to meet with a general only to realize that he sent one of his aides in Emma Frost (January Jones). Shaw meanwhile, stages an attack with his henchman Azazel (Jason Flemyng) and Riptide (Alex Gonzalez) on the CIA to gain the mutants that Xavier and Lensherr recruited.

After Frost’s capture and learning what Shaw did, Xavier decided to move the operations to his home as he and Lensherr decide to teach Raven, Hank, Sean Cassidy (Caleb Landry Jones) and Alex Summers (Lucas Till) to prepare them for battle. With Hank trying to make a cure that would keep mutant abilities but make them look human, he tries it on himself which ends up looking more mutant. Xavier learns about Erik’s past as he tries to get him to reason as they start to battle Shaw and his team to prevent World War III from happening in Cuba. Even as the battle would eventually lead to the division between Xavier and Lensherr.

The film is essentially an origins story of sort about both Erik Lensherr and Charles Xavier in how they lived different lives and why they are the different men that originally formed the group that would become the X-Men. At the same time, it allows the story to learn where Cerebro came from and why Xavier used the house he lived in as a school. While that’s part of the story of the film, it also allows the film to get into stories such as Lensherr’s past in the Holocaust as well as introducing characters such as Mystique, Beast, and MacTaggert as how they played part into the X-Men lore. The problem with the script is that there’s so much told in the film but not enough to simplify things.

The screenplay does have some characters such as Raven, Hank, Moira, Shaw, Charles, and Erik that got things to do and fully-realized. Yet, there was also some that didn’t get fully developed as there were too many characters in the film to kind of follow. Some appear and then they’re gone while the Emma Frost character is really very dull. While setting the film during the Cold War and the Cuban Missile Crisis isn’t a bad idea and there wasn’t too much exposition in the film. That use of historical elements mixed in with the story and all of these characters create something that is too much without a central focus which should’ve been solely on Xavier and Lensherr.

Matthew Vaughn’s direction has some excellent moments though it has things that many blockbuster film audiences have seen before. Still, Vaughn manages to cram some humor into the film that includes a cameo by a future X-Men. Vaughn does create some exciting action sequences while his real strength in his direction is in the more intimate scenes involving Charles and Erik. He doesn’t have to do much and let the actors act as it features Vaughn doing what he does best. Yet, due to the script’s lack of cohesiveness and Vaughn wanting to incorporate many different genres into the film. Vaughn isn’t able to make things simpler while giving in to clichés with some things in the film. Overall, Vaughn does manage to make something that is entertaining but doesn’t do enough to make it stand out with the rest of the films in the X-Men franchise.

Cinematographer John Mathieson does some good work with the photography that includes some excellent moments such as the stylish lights at nightclub where Erik and Charles interview a mutant along with the blue-lights that surrounded Shaw‘s submarine reactor. Editors Eddie Hamilton and Lee Smith do a fine job with the editing that includes a wonderful montage scene of the mutants in training. Production designer Chris Seagers, along with set decorators Erin Boyd and Sonja Klaus and art director John King do a very good job with the look of Shaw‘s sub along with the clubs of the 1960s and the early versions of Cerebro and the X-plane.

Costume designer Sammy Sheldon does a nice job with the costumes from the 60s-style clothing the women wear including the lingerie to the early X-Men suits the team wears for the climatic battle scene. Visual effects supervisor Guy Williams does some excellent work for the visual effects moments such as Raven and Emma Frost changing form or Azazel popping up every now again as a teleporter. Sound designer Craig Berkey does some wonderful work with the sound such as the sound of rockets firing and cannons exploding to the chaos that goes on during the climatic battle scene. The film’s score by Henry Jackman is pretty good as its orchestral flair plays up to the drama and action moments of the film. Even as it has a bit of a 60s vibe to the music which features some songs from the early 1960s.

The casting by Roger Mussenden, Jeremy Rich, and Lucinda Syson has some inspiring moments as it features some appearances from Michael Ironside as a U.S. Navy captain, James Remar as a U.S. general, Ray Wise as a U.S. secretary Rade Sherbedgia as a Russian general, Don Creech as Col. William Stryker, and a couple of cameos from previous players of the X-Men films. Morgan Lilly, Laurence Belcher, and Bill Milner are very good as the young versions of Raven, Charles, and Erik, respectively as is Glenn Morshower as Col. Hendry and Matt Craven as the CIA director.

Jason Flemyng and Alex Gonzalez are OK in their respective roles as the villains Azazel and Riptide though they don’t get much to do other than be bad and fight. Edi Gathegi is OK as the good mutant Darwin as he only appears briefly as does Oliver Platt in a small role as a CIA agent. Zoe Kravitz has her moments as Angel though she doesn’t get much to do either other than fly and be sexy. Caleb Landry Jones and Lucas Till are very good in their respective roles as Sean Cassidy/Banshee and Alex Summers/Havok as they get to have a few funny lines. The film’s worst performance easily goes to January Jones as Emma Frost as Jones does nothing but look sexy and read lines as the only highlight in her performance is her lovely cleavage.

Rose Byrne is very good as Moira MacTaggart, the CIA agent who becomes part of the X-Men team as well as being a love interest of sorts for Xavier. Byrne plays it straight for most of the film as she does get a few funny moments including a great scene where she looks amazing in lingerie. Nicholas Hoult is also good as Hank McCoy/Beast who is a young scientist who helps develop future X-Men inventions while trying to find a cure to normalize the mutant gene as he eventually embraces his mutant role. Jennifer Lawrence is excellent as Raven/Mystique, a young woman wanting to fit in as she is torn between the two ideologies of Charles and Erik while befriending Hank. Kevin Bacon is superb as Sebastian Shaw, the film’s main antagonist as Bacon gets a chance to flex his language skills while be a charming villain who can be manipulative and cool.

The film’s best performances definitely go to James McAvoy and Michael Fassbender. In the role of Charles Xavier/Professor X, McAvoy brings some humor to the character while being the man who pleads for peace and understanding. McAvoy brings a calm approach to his performance as he is also the most nurturing teacher of the X-Men team. For the role of Erik Lensherr/Magneto, Fassbender brings a more menacing quality as a man seeking revenge as he is the opposite of Xavier in wanting to be violent if necessary. It’s a remarkable performance for Fassbender as he also brings a great tragic weight to his character that is conflicted while he and McAvoy have great chemistry together.

Despite the messy script and uneven direction of the film, X-Men: First Class is a pretty good film from Matthew Vaughn thanks in part to the stellar performances of James McAvoy and Michael Fassbender. While the film does have something to offer to fans of the genre, it doesn’t do enough to make it more straightforward. Even though it is a vast improvement over the previous films like X-Men 3: The Last Stand and X-Men Origins: Wolverine. In the end, X-Men: First Class is an entertaining film from Matthew Vaughn that serves its purpose to its fans.

I had a great time with this film and I thought that the casting of Fassbender was a smart decision on Vaughn's part because he just has that look and feel about him that is so mysterious, yet just so amazingly breath-taking. Good Review Steven!

Thanks Dan. I was entertained and let it play for what it was. It's a decent film though I've seen better and I agree that Fassbender was the right person to play Magneto. I want more movies with Fassbender. He's so hot right now.