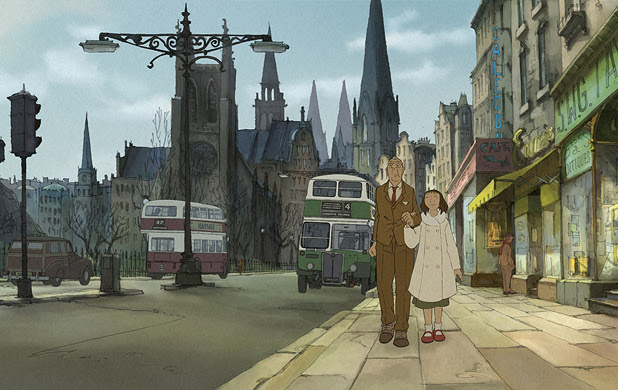 Directed by Sylvain Chomet and based on an un-produced screenplay by the late Jacques Tati, L’Illusionniste (The Illusionist) is the story about the life of a magician who meets a young lady who is convinced he is the real thing as he struggles to find work during visit to a small town. With a screenplay written by Chomet and Tati’s longtime collaborator Henri Marquet, the hand-drawn animated film is a tribute to the work of Tati as well as giving an audience a chance to revisit the work of one of France’s greatest filmmakers. L’Illsionniste is a charming yet heartwarming film from Sylvain Chomet.

A magician who goes by the stage name Tatischeff is trying to make it as a magician as he ends up entertaining to a very small audience in small theaters in France. With the world changing during the late 1950s, there is little time for work as a magician as he goes to Britain for work where it’s even harder as he has to follow a rock band at one point. After working at a party, the magician meets a drunken Scottish man who takes him to his small town for to provide entertainment for a pub. Watching the magician perform is a young girl named Alice who is amazed by the magician whom she meets later on as he gets her a pair of red shoes to replace the decayed shoes she’s wearing.

With the magician seeking more work around Scotland, he travels to Edinburgh as Alice joins him as he gets a job working for a small theater. While they live at a hotel with a ventriloquist, a clown, and a trio of acrobats, work for the magician starts to struggle as Alice becomes amazed by the city as she desires to look and act like a woman. With the magician taking on various jobs on the side, things begin to look grim while Alice becomes more drawn to the modern world as she falls for a young man. The magician then realizes what is happening to Alice as he tries to come to terms with everything that is going on around him.

While the film is meant to be a project the late Jacques Tati was to do with his youngest daughter Sophie (whom he had never met), it was also rumored to be a film where Tati wanted to reconcile with his eldest daughter Helena in whom he abandoned when she was just a baby. While the motives for wanting to do this project remains unsure, the film has a father-daughter relationship of sorts. Still, it’s about a young girl who admires this amazingly gifted magician in a world where he’s not in favor as much while she is more drawn to it.

While the film doesn’t have a lot of dialogue as the voices for the magician and Alice are provided by Jean-Claude Donda and Eilidh Rankin, respectively, are a mix of various languages. It’s a film that is more of a tribute to Tati as the magician character has a look and persona that is reminiscent of some of the characters that Jacques Tati has played. The film also features a scene where the magician walks into a theater where Tati’s 1958 film Mon Oncle is playing as a clip of that film is shown while the magician mimics the same movement as Tati.

Chomet’s direction is done with an amazing style and look that is distinctive of his work while he also putting some of Tati’s directing style into the film for the way the humor is set up and emphasizing more on action rather than dialogue. While the story might be considered sentimental, it does dwell into that but not that heavily as he puts a lot of humor into the film. Chomet’s animated, hand-drawn style does create a look that is very wondrous and rich for the way characters look as well as the surroundings.

Serving as both the film’s editor and music composer, Chomet’s approach to the former is straightforward by using a few dissolves and jump-cuts to keep the film’s rhythm going. For the music, Chomet plays into the Tati musical style of playful-driven pieces while also going for a more somber score for the dramatic moments of the film. Along with some amazing sound work from Carl Goetgheluck and the look of the set pieces created for the film by production designer Jacques Arhex and art director Bjarne Hansen. The film has a look that is very rich while creating a world that is seemingly modern through its sound. The overall work that Chomet does in his direction is superb and marks as a great tribute to the work of Jacques Tati.

L’Illusionniste is a charming yet touching film from Sylvain Chomet that brings Jacques Tati’s un-produced story to life. While it may not have the more whimsical charm of The Triplets of Belleville, it is still an engaging yet lively film to watch while proving that hand-drawn animation can still weave some magic. For people new to the works of Jacques Tati, the film is a decent introduction though Monsieur Hulot’s Holiday is a much better introduction. In the end, L’Illusionniste is an extraordinary tribute to Jacques Tati from the imaginative mind of Sylvain Chomet.

When you combine this film with TOY STORY 3 and HOW TO TRAIN YOUR DRAGON, you get one of the best classes for Best Animation the Oscars have had since they launched the category.

I'll always remember when the screening we were at was ending, Kurt from Row Three leaned over and said to me "They shoulda called it the DISillusionist"

It's a sad film but the animation was truly fascinating. 2010 was a good year for animated films. This, Toy Story 3, How to Train Your Dragon, and Tangled plus some pretty good films like Despicable Me and Megamind. It was the year animators stepped up their game. What happened this year?

The movie works fine even if you're not that much into Tati. (Haven't watched him, being a sceptic since I'm generally not much into slapstick). I loved the melancholy of it, I loved the drawings and the beautiful picturing of Edinburgh, which I visited this summer and fell in love with. It's sad, but not overly so.

@Velvet-I've only one Tati film so far so I was kind of familiar of what to expect. Yet, I didn't expect for the film to be kind of sad. I still enjoyed and do love the way it looks.