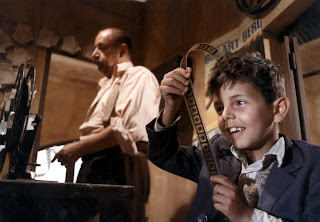 Written and directed by Giuseppe Tornatore, Cinema Paradiso tells the story of a film director recalling the memories of his life when a man introduces him as a boy the world of cinema. Through the images, the cinema is played in a little village in Sicily while causing all sorts of controversy. Through his years growing up, the boy becomes a man and has to learn about the sacrifices and such into what it takes to become the director that he is now. Starring Salvatore Cascio, Marco Leonardi, Philippe Noiret, Jacques Perrin, and Leopoldo Trieste. Cinema Paradiso is an inspiring and heartwarming film from Giuseppe Tornatore.

A man named Salvatore (Jacques Perrin) returns home to his Roman apartment where his girlfriend that his mother (Pupella Maggio) has called about the death of a man named Alfredo (Philippe Noiret). Salvatore is forced to recall his life with as a boy in a Sicilian village where he was an altar boy (Salvatore Cascio) by day while living with his mother (Antonella Attili) and little sister as he was called Toto. At this little village square is a theater that Toto loves called Cinema Paradiso where Toto sneaks into a Jean Renoir movie to see Father Adelfio (Leopoldo Trieste) watching and ringing a bell to cut a kissing scene to be shown as the theater’s projectionist Alfredo makes note for the priest. Though Toto would sneak in to the movies where he would get into trouble with his mother, he is able to befriend Alfredo who has managed to save the images that he was forced to cut.

With Alfredo teaching Toto how to be a projectionist after Toto helped him pass night school lessons, the two decide to hold a double feature one night where they decide to show the film outside of the theater. Yet, it would cause trouble where the theater got burned down as Toto would save Alfredo. When a local named Spaccafico (Enzo Cannavale) won the lottery and decided to rebuild Cinema Paradiso, the town manages to keep going as Toto becomes the new projectionist with Alfredo as his mentor. Several years alter as Toto (Marco Leonardi) has become 17 with aspirations to become a filmmaker. He falls for a young woman named Elena (Agnese Nano) as he hopes to win over as he asks Alfredo for help. Though Salvatore hopes to win her heart, he deals with the realities that is a sharp contrast to the world of films that aren’t real. With Elena gone, Salvatore ponders what to do as Alfredo tells him to go after his dream.

Returning home years later as a successful filmmaker, Salvatore reflects on his life and the town he grew up in where he finds a final present from the man who taught him about life and film.

While the film isn't just a love letter to cinema, it's also a coming of age story of how cinema changed a boy's young life into the man that he is now. The film is also about sacrifices in what the adult Salvatore is forced to see with the people he knew all those years ago. Writer/director Giuseppe Tornatore creates a film that is obvious from an experience that is personal to him. The film's script is wonderfully structured with the first act about Toto, his friendship with Alfredo, and his life at the Cinema Paradiso in its first incarnation. The second act is about the theater rebuilt with Salvatore as the projectionist and his attraction to Elena. The third and final act is about his departure from Sicily and his return 30 years later.

Tornatore's direction is imaginative as it has elements of nostalgia and heartbreak where the images he captures inside that beautiful theater is a reminder of how powerful an image on film is. From the way he takes a close-up to understand the emotions to how the film shifts from one period to another. Given the fact that he shot the film on location in Sicily, it has a personal feel that it's very inspirational. The whole film is mesmerizing from start to finish where by the final moments of the film, it becomes a tearjerker in every way. Some might call it manipulative but given the idea of what the film is about and Tornatore's personal touch, it's one that works in channeling its emotions. It's truly some of the most imaginative and touching directions ever made on film.

Cinematographer Blasco Giurato brings a wonderful look to the film features gorgeous, exterior shots from day and night to the look inside the theater that is just amazing. Production designer Andrea Cristani creates an amazing look of the theater from the lion's head that shoots out the film to the balcony in the theater. The theater itself is a place filled with magic and elegance. Costume designer Beatrice Bordone does an excellent job in capturing the look of the clothes worn in the 1940s and 1950s, notably the dresses that Elena wears.

Editor Mario Morra does some wonderful work in the cutting, notably the shifting of sequences where Alfredo touches the boy Toto's face and then cuts to Alfredo and then cuts to the face of the young Salvatore. Sound recordist Massimo Loffredi does some magic in the sound to capture the way people react to a film shown outside of the theater in one brilliant scene.

The film's amazingly elegant, romantic film score could've been done by any composer but instead, it goes to the Maestro himself, Ennio Morricone. Along with a love theme by his daughter Andrea, the film's music is filled with lush arrangements and piano melodies to convey the sense of nostalgia, sentimentality, and passion that is the film itself. Morricone's musical approach is different from the legendary, operatic work that he's done with Sergio Leone. Instead, the score is very dramatic but not the point of suspense or action but rather taking it in a smoother, softer tone that shows the innocence of the film and its protagonists. The score that Ennio Morricone makes is truly one of the film's grand highlights.

Finally, there's the film's cast that includes some notable yet memorable small roles from Isa Danieli as Alfredo's wife Anna, Roberta Lena as Salvatore's sister Lia, Tano Cimarosa as the sleepy blacksmith, Nino Terza as the father of Toto's friend who is a regular at the theater, and Nicola Di Pinto as the village idiot who claims the town's square is his. Enzo Cannavale is good as Spaccafico, a resident who wins the lottery and gives the town a new theater while late in the film, reminisces with Salvatore about the town now and how he couldn't relate to the changing times. Antonella Attili is great as the young mother of Salvatore who is hoping for the return of her husband from the war while dealing with his passion. Pupella Maggio is also great as the old mother who seems to understand her son and his grief.

Agnese Nano brings an amazing presence as the very beautiful Elena who provides the kind of love and distraction that Salvatore needed while representing the alternative he needed if there was another life. Leopoldo Trieste is good as the town's strict priest who is convinced that he's trying to protect his town only to find himself having trouble with the changing times in movies.

In the three roles of Salvatore, the best is easily Salvatore Cascio as the boy Toto with his winning smile, carefree innocence, and mischievous personality who is the kind of boy you can just enjoy. Marco Leonardi is also excellent as the young Salvatore with his youthful energy and confusion in trying to figure out what to do with life. His role is the more complex as he's playing a young man trying to figure out where to go. Jacques Perrin is excellent in his brief role as the older Salvatore that also has the same innocence in his face as his child counterpart had while carrying a sense of sadness about his own life.

The film's best performance goes to the late Philippe Noiret as Alfredo. Noiret brings a wonderful mix of humor, wisdom, and sentimentality to the role of a man who becomes an unlikely father figure to a young boy in playing a role in his life. The French actor has a wonderful presence early in the film as a mentor who shows a young boy about the wonders of cinema. In the film's second half, his experience on life helps the course of the film while telling Salvatore what to do about his life. It's a great performance from the late French actor who wowed Italy.

Cinema Paradiso is a ravishing and heartwarming film from Giuseppe Tornatore. Featuring a great cast and an engaging story, it is truly one of the best films ever about going to the movies. It’s also the film that is very accessible for those who love melodrama, comedy, and romance as it is a film that can appeal to a wide audience. In the end, Cinema Paradiso is a ravishing film from Giuseppe Tornatore.

A personal fave,3 scenes that touch me the most:
1.They show a film on the surface of a building
2.The girl turns up in the rain
3.Of course,the kissing montage at the end

How can anyone not love this film?

I went to a special screening at 10:30 AM on Saturday to see this film. It has to be seen in the big screen no matter what version it is.

Great post of one of my fave films ever!! Agree it's sooo elegant and romantic, with such a big heart. I LOVE Alfredo's relationship w/ Toto, and the boy's journey is one of the best cinematic coming of age ever filmed IMO.

I actually fell in love w/ the score first before I saw the film, but the film certainly matches its magic.

I liked this quite a bit. Like David, I have a soft spot for the kissing montage, too.

@Flixchatter-Only someone like the Maestro can create great score pieces that can win our hearts and elevate a great movie.

@Chip-How can anyone not love the kissing montage in the end? I still tear up whenever I see it and seeing it recently on the big screen, I was drowning in tears. I'm not afraid to say it.