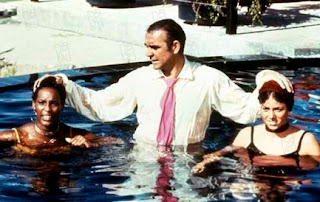 Based on Ian Fleming’s novel, Diamonds are Forever is the story of James Bond infiltrating a diamond smuggling operation by Ernst Stavros Blofeld who plans to use the diamonds to build a giant laser. Directed by Guy Hamilton with a screenplay by Richard Maimbaum and Tom Mankiewicz from a screen story by Ian Fleming, the film marks Sean Connery’s return to play James Bond after being absent from the predecessor as the film will mark the last time he plays Bond in its official franchise features. Also starring Jill St. John, Charles Gray, Lana Wood, Jimmy Dean, Bruce Glover, Putter Smith, Desmond Llewelyn, Lois Maxwell, and Bernard Lee as M. Diamonds are Forever is dazzling yet entertaining film from Guy Hamilton.

After trying to find Ernst Stavros Blofeld (Charles Gray) and getting rid of him, James Bond receives a briefing from M about a diamond smuggling operation that is happening all over the world where many smugglers are mysteriously killed. Bond travels to Amsterdam posing as professional smuggler Peter Franks (Joe Robinson) where he meets a contact named Tiffany Case (Jill St. John) who is also a smuggler herself. After a tussle with the real Franks, Bond gets rid of him and has Franks be a dead James Bond where Bond smuggles fake diamonds into Franks’ body as he and Case arrive in Las Vegas to handle a deal. Bond seems to have the deal made only to be nearly killed by a couple of men in Mr. Wint (Bruce Glover) and Mr. Kidd (Putter Smith).

Bond goes to the prestigious Whyte House hotel and casino where the reclusive Mr. Whyte (Jimmy Dean) supposedly lives at where Bond meets a vivacious woman named Plenty O’Toole (Lana Wood) as he tries to deal with other smugglers over the fake diamonds where Tiffany arrives for Bond to make a plan for her to retrieve the real diamonds. Instead, she gets the diamonds and goes out on her own where Bond finds out that she’s working for someone else whom she admits doesn’t know except for his voice. Bond and Case travel to Whyte’s mining plants where Bond makes a discovery about what Whyte’s scientist Metz (Joseph Furst) is doing with the diamonds as Bond wants to confront Whyte.

After a chase involving Whyte’s men and some police, Bond sneaks into Whyte’s secret suite where he makes a far more chilling discovery of who really lives at the suite. Learning what is really going on and the whereabouts of the real Mr. Whyte, Bond realizes what he must do to save the world from a giant laser blowing up all of the nuclear weapons where it’s next target is some of the world’s major cities.

The film is about James Bond delving into the world of diamond smuggling where he has to save the world once again from a giant laser made by a mysterious villain who plans to hold the world hostage unless he gets some money. That’s the plot of the film although there’s a lot in the screenplay by Richard Maimbaum and Tom Mankiewicz that’s all over the place as the script’s main drawbacks is that there’s a lot that happens that makes the screenplay a bit of a mess. Notably as it aimed to be a Bond film with some humor where the result is a bit mixed as it’s the screenplay isn’t as straightforward as it should’ve been. Plus, the characters such as Tiffany Case aren’t as developed though she does remain interesting while the reveal of the main villain is pretty obvious as it’s a script has an air of familiarity that does make it a bit frustrating. Despite these flaws, the screenplay does what is needed to be done for the Bond story where it at least makes it fun to watch.

Guy Hamilton’s direction is definitely stylish for its array of big sequences such as the climatic helicopter attack on the oil rig as well as a few chase scenes around the desert and in the city of Las Vegas. Yet, it does open with a bang where it sort of picks up where the last film left off as Bond attacks a few characters to find out where Blofeld is leading to a big confrontation between Bond and Blofeld. The rest of the film then goes on as business as usual with gorgeous compositions of the scenes in Amsterdam and Las Vegas as Hamilton does take his time to set up the action and suspense. He also injects a few bits of campy humor such as Bond facing off a couple of Amazonian, bikini-clad women in a scene where even Bond can be overwhelmed. Despite some of the flaws in the screenplay, Hamilton does manage to create a film that is solid and features enough moments to make it a fun James Bond film.

Cinematographer Ted Moore does excellent work with the photography such as the exterior settings of Amsterdam and Las Vegas along with the interior looks of the suites that Bond and Mr. Whyte stays in. Editors Bert Bates and John Holmes do wonderful work with the editing by creating a montage of Mr. Wint and Mr. Kidd‘s killings during M‘s briefing of what Bond must doe. Production designer Ken Adam, along with set decorators John P. Austin and Peter Lamont and art directors Bill Kenney and Jack Maxsted, does amazing work with the look of the Whyte suite as well as his secret penthouse and the bases where his scientists are conducting experiments to destroy the world.

Costume designer Don Feld does nice work with the designs of the bikinis and clothes that Tiffany Case wears. Sound recorders John W. Mitchell and Al Overton do terrific work with the sound to capture the sound of car chases and gun fire for some of the film‘s action scenes. The film’s score by John Barry is brilliant for its intensely suspenseful score including a playful theme on the duo of Wint and Kidd to establish their appearances. The title song written by Barry and lyricist Don Black is a bombastic song with some funky guitar riffs as it’s sung with great power by Shirley Bassey.

The casting by Weston Drury Jr. is superb for the ensemble that is created as if features some notable small performances from Lola Larson and Trina Parks as Whyte’s respective Amazonian bodyguards Bambi and Thumper, Leonard Barr as a smuggler/comedian named Shady Tree, Joe Robinson as the smuggler Peter Franks, Bruce Cabot as Whyte’s casino manager Saxby, and Joseph Furst as the scientist Metz. Other noteworthy performances include the regulars Lois Maxwell in her one-scene appearance as Miss Moneypenny, Desmond Llewelyn as the very witty inventor Q, Norman Burton as Bond’s CIA friend Felix Leiter, and Bernard Lee as the always exquisite M. Lana Wood is pretty good in her small role as Plenty O’Toole while the duo of Bruce Glover and Putter Smith are quite funny as the mischievous villains Mr. Wint and Mr. Kidd, respectively.

Jimmy Dean is excellent in his small role as the reclusive millionaire Mr. Willard Whyte who finally appears late in the film as a man unaware of what he’s done as he aids Bond in fighting the mysterious villain. Charles Gray is great in the role of Blofeld where he brings a lot of charm to his role in his early appearance while proving to be a far more formidable foe that is focused on destroying the world and Bond. Jill St. John is terrific as the smuggler Tiffany Case who isn’t sure what Bond is trying to do only to aid him when she realizes who she’s really helping as it’s a fine part that doesn’t have much development other than look great in skimpy clothing.

Finally there’s Sean Connery as Agent 007 where Connery brings the same swagger and charm that audiences know and love while there’s also a bit of aggression as he is determined to destroy Blofeld. It’s also a chance for Connery to show that he is aware that James Bond isn’t invincible and is willing to take hits as it’s Connery at his most physical in playing Bond as he gives him more to do when fighting someone. It’s a fitting farewell of sorts for Connery to play the character he made famous as Connery goes out with a bang for the franchise’s official series.

Diamonds are Forever is an excellent film from Guy Hamilton that features Sean Connery in another top-notch performance as James Bond. While it may be the weakest film of the Blofeld trilogy that was preceded by You Only Live Twice and On Her Majesty’s Secret Service. It is still a film that does enough for what audiences want in a Bond film where it entertains and thrills while having the time for the audience to laugh a bit. In the end, Diamonds are Forever is a fun film from Guy Hamilton.

James Bond Files: The EON Films: Dr. No - From Russia with Love - Goldfinger - Thunderball - You Only Live Twice - On Her Majesty's Secret Service - Live & Let Die - The Man with the Golden Gun - The Spy Who Loved Me - Moonraker - For Your Eyes Only - Octopussy - A View to a Kill - The Living Daylights - Licence to Kill - GoldenEye - Tomorrow Never Dies - The World is Not Enough - Die Another Day - Casino Royale (2006 film) - Quantum of Solace - Skyfall - SPECTRE - No Time to Die