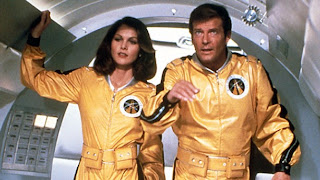 Based on Ian Fleming’s novel, Moonraker is the story of James Bond uncovering a space shuttle theft as he meets its manufacturer who plans to create a society in outer space. Directed by Lewis Gilbert and screenplay by Christopher Wood, the film has James Bond traveling all over the world again as well as go to outer space to face off against another megalomaniacal villain. Also starring Michael Lonsdale, Lois Chiles, Richard Kiel, Walter Gotell, Desmond Llewelyn, Lois Maxwell, and in his final appearance as M, Bernard Lee. Moonraker is a spectacular film from Lewis Gilbert.

After the theft of a space shuttle, James Bond is asked by M and the Minister of Defense Frederick Gray (Geoffrey Keen) to investigate as Bond travels to California to meets its manufacturer Hugo Drax (Michael Lonsdale). After meeting Dr. Holly Goodhead (Lois Chiles) at Drax’s lab, Bond seduces Drax’s assistant Corrine Dufour (Corrine Clery) to get information about what Drax is planning as he travels to Venice for further investigation. After dealing with some of Drax’s people, Bond discovers glass vials containing nerve gas put into chambers as Bond later learns that Goodhead is a member of the CIA. After reporting the news to Gray and M about the lab, they discover that it’s gone as Gray is forced to apologize to Drax for Bond’s blunder though M knows something is up.

Going to Rio de Janeiro, Bond meets his contact Manuela (Emily Bolton) to find out what Drax is doing in Rio as he suddenly meets up with Drax’s newly-hired henchman in Jaws (Richard Kiel) as he and Goodhead have another encounter with Jaws when they learn that Drax is moving all of his properties away from Rio. Though Bond was able to escape the clutches of Drax’s henchmen, Goodhead was captured as Bond regroups at a secret base where Q (Desmond Llewelyn) discovers the source of the nerve gas from a rare orchid prompting Bond to go to the Amazon where he encounters Jaws and more of Drax’s men leading to Drax’s secret base where Goodhead is held prisoner. After another escape with Goodhead, the two travel to outer space where they learn about Drax’s big plans to hold a society of a new world and destroy the old one. The news would force Bond to save the world with the help of an unexpected ally.

The film is essentially about James Bond stopping another industrialist from destroying the world to create a new one but this time around, it’s in outer space. Yet, it would have Bond doing more investigating and engage into conflict with henchman as he is trying to save the world once again. This time around, he faces off against a man who wants to create a new world that away from all of the decadence and turmoil but also create new species with people who have perfect genes. While there’s nothing wrong with Drax’s ideas, the fact that he wants to destroy Earth just makes him the kind of foe Bond has to defeat. The screenplay succeeds in creating a character as complex as Hugo Drax as well as creating a Bond girl in Dr. Holly Goodhead who is quite intelligent and can kick some ass in order to help Bond.

The direction of Lewis Gilbert is definitely big in terms of the ambition he aims for as much of the film takes place in different locations such as Venice, Rio de Janeiro, California, and parts of Guatemala. Yet, Gilbert ensures that the film has all of the tropes of what is expected in a Bond film through the beautiful locations and thrilling action sequences while taking time to uncover things that is crucial to the film’s plot. While the film does contain humor, at times it goes a little overboard towards silliness where it ends up being a bit of a distraction rather than to help advance the story. Yet, the humor isn’t shown as much as it leads to the climatic scenes in outer space in the third act where Bond takes charge and faces off against Drax and destroy his plans. Despite the flaws the film carries, Lewis Gilbert creates another successful and engaging Bond film that does everything that is expected in a Bond film.

Cinematographer Jean Tournier does a wonderful job with the film‘s photography from the gorgeous exterior shots of some of the film‘s exotic locations to the interiors in Drax‘s mansion and the space station to maintain a very pristine look. Editor John Glen does excellent work with the editing to play up the element of suspense and action with some stylish cuts for the latter. Production designer Ken Adam, with set decorator Peter Howitt and art directors Charles Bishop and Max Douy, does brilliant work with the set pieces from the look of Drax’s mansion and home bases to the look and interiors of the space station.

Costume designer Jacques Fonteray does superb work with the costumes from the suit that Drax wears at the space station to the look of the space suits worn by the U.S. Marines astronauts and Drax‘s astronauts during the climatic laser battle. Visual effects supervisor Derek Meddings does spectacular work with the visual effects such as the many scenes in outer space that involves zero gravity and anything involving lasers. Sound mixer Daniel Brisseau does nice work with the sound from the way the lasers sound to the array of sound to exemplify the film‘s action sequences. The film’s score by John Barry is terrific for its lush orchestral arrangements and the bombast it has for many of the film’s action sequences. The title song co-written by lyricist Hal David and sung by Shirley Bassey is a wonderful ballad that plays to the tradition of Bond themes while it also has a disco remix played in the film’s final credits.

The casting by Weston Drury Jr. and Margot Capelier is incredible for the ensemble that is created as it includes some notable performances from Corrine Clery as Drax’s assistant Corrine Dufour, Toshiro Suga as Drax’s henchman Chang, Emily Bolton as Bond’s Rio contact Manuela, Michael Marshall as the U.S. Marines commander, and Blanche Ravalec as the girl Dolly that Jaws falls for. Bond regulars such as Walter Gotell as General Gogol. Geoffrey Keen as the Minister of Defense, Lois Maxwell as Miss Moneypenny, and Desmond Llewelyn as Q are fun to watch as they each give memorable performances. Bernard Lee is great as Bond’s superior M who backs Bond up following a blunder as it’s a truly gracious performance from Lee in his final outing as M.

Richard Kiel is excellent as the henchman Jaws where he finally gets something to do other than go after Bond where his character falls in love as he gets to display a more tender side to the character. Lois Chiles is wonderful as Dr. Holly Goodhead by providing a calm yet cool performance as a character who aids Bond in the mission while proving to be a very smart person Bond can count on. Michael Lonsdale is very good as Hugo Drax, an industrialist who has ambitions to create a new world as Lonsdale displays a great sense of restraint and prestige as the film’s antagonist. Finally, there’s Roger Moore as James Bond where Moore displays his sense of humor and charm to the character while proving to be more direct once his character has to do investigating and fighting as it’s one of Moore’s essential performances as Bond.

Despite some of the silliness in the story and the unnecessary humor, Moonraker is still a stellar film from Lewis Gilbert. Thanks in part to Roger Moore and Michael Lonsdale, it’s a film that is worth watching for its sense of adventure as well as being thoroughly entertaining. Notably as it has Bond taking on the sci-fi genre with some success as Bond manages to find ways to remain relevant in the age of the blockbuster. In the end, Moonraker is a marvelous James Bond film from Lewis Gilbert.

James Bond Files: The EON Films: Dr. No - From Russia with Love - Goldfinger - Thunderball - You Only Live Twice - On Her Majesty's Secret Service - Diamonds are Forever - Live and Let Die - The Man with the Golden Gun - The Spy Who Loved Me - For Your Eyes Only - Octopussy - A View to a Kill - The Living Daylights - Licence to Kill - GoldenEye - Tomorrow Never Dies - The World is Not Enough - Die Another Day - Casino Royale (2006 film) - Quantum of Solace - Skyfall - SPECTRE

I have chosen your site to win the Liebster Award. Go here to learn more. http://www.videovangaurd.com/2012/07/the-vern-accepts-liebster-award-and.html

Alrighty then. I'll do it in a few days.

I saw this film for the first time when I was a teen and I thought Lois Chiles was just about the most beautiful woman I had ever seen. I don't think I was old enough to get the double entendre with her name, though. (Ah, the innocent pre-internet days).

@Chip-Lois is a very beautiful name and I first saw this as a teen but didn't get the double entendre either. Still, it's a fun film. The days of pre-Internet. Wow..