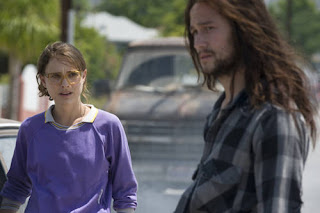 Directed by Spencer Susser and screenplay by Susser and David Michod from a story by Brian Charles Frank, Hesher is the story of a young boy whose life is falling apart following the death of his mother where he meets an anarchist who causes mayhem at every turn he’s in. Playing the titular character is Joseph Gordon-Levitt as the film also stars Devin Brochu, Rainn Wilson, Natalie Portman, and Piper Laurie. Hesher is a wild yet harrowing drama from Spencer Susser.

After the death of his mother (Monica Staggs) in a car accident two months ago, T.J. (Devin Brochu) is still reeling from her loss as he is obsessed with getting back the family car. With his father Paul taking numerous pills to deal with his loss as they both live at the home of Paul’s grandmother Madeleine (Piper Laurie), T.J. notices a weird young man named Hesher who had been following him after breaking a window in a home that was being built. Though T.J. has issues with a bully named Dustin (Brendan Hill), he still sees Hesher lurking around as Hesher decides to move in to the home where he befriends Madeleine. While T.J. wonders about Hesher and his antics, Hesher takes T.J. around to deal with Dustin’s car where T.J. gets in trouble with the police.

Hesher still likes to cause trouble as he becomes part of the home as he helps out Madeleine while noticing that T.J. has a crush on a 20-something grocery store cashier named Nicole (Natalie Portman). When Nicole accidentally hits another car, Hesher defends her as he takes her and T.J. into an adventure where things were fun for a while. Yet, Nicole feels she’s already in enough trouble with work and money issues as T.J. wants to help out. Yet, Hesher’s presence finally takes a toll between T.J. and Paul who are unaware about Madeleine’s illness. The result of Madeleine’s issues lead to T.J. acting out as he feels helpless in sorting things out where he deals with everything he’s lost as Hesher tries to pick up all of the pieces of a broken family.

What happens to a young boy whose life is going downhill following his mother’s death when an unconventional anarchist arrives to his home to shake things up? That’s the idea of what the film is about where it follows a young boy in his grief as he reluctantly lets in this 20-something guy who likes to listen to heavy metal, cause mayhem, and just live somewhere for a while. Essentially, it’s a coming-of-age tale for a young boy as he deals with loss and growing pains while his father is lost in his grief as they both live with his grandmother who is trying to feel useful only to find some companionship in someone like Hesher. There’s also a 20-something young whom T.J. has a crush on as she is trying to deal with her own issues as she befriends T.J. and Hesher in the fact that they’re both misfits as she admits to her own imperfections.

The film’s lack of conventional storytelling in the screenplay allows director Spencer Susser to go for a very stylistic approach to the film. Through some slow-motion shots, moments of unpredictability, and unwillingness to be sentimental nor brash. It’s a film that is very uncompromising just like the titular character himself who is clearly undefined and not willing to give any answers for why he is the way he is. Through some amazing compositions and wide shots set in California, Susser allows the film to be pretty sunny but also off-kilter due to Hesher’s antics often seen from T.J.’s perspective. Though there’s a few moments in the film such as a penultimate scene between Hesher, T.J. and Paul that is a bit much. The overall work is quite dazzling as Susser creates a truly mesmerizing drama about loss.

Cinematographer Morgan Susser does great work with the cinematography from the sunny exterior shots to the more stylish nighttime interior and exteriors to help set the mood for the scene. Editors Spencer Susser and Michael McCusker do excellent work with the editing to play out the intensity of some of the film‘s violence as well as the antics of Hesher. Production designer Laura Fox, with set decorator Jennifer Lukehart and art director Charles Vargas, does wonderful work with the set pieces such as T.J.’s home filled with places to suggest where T.J. and his dad are at as well as the messy van of Hesher.

Costume designer April Napier does nice work with the costumes as it‘s mostly casual with Hesher being the most outrageous due to largely black clothing. Sound designer Sam Petty and sound editors David Esparaza and Will Riley is terrific for the way it plays out the chaos in T.J.’s life in moments that involve Hesher as well as more calmer moments without Hesher. The film’s score by Francois Tetaz is very good for its low-key ambient score to play out the drama. The film’s music soundtrack consists largely of heavy metal music courtesy of Motorhead and Metallica where the latter carries the bulk of the music as the soundtrack also includes a Dion & the Belmonts song in a key scene.

The casting by Justine Baddeley and Kim Davis-Wagner is superb for the ensemble that is created as it include some notable appearances from John Carroll Lynch as a car repair shop owner, Monica Staggs as T.J.’s mom, and Brendan Hill as T.J.’s bully Dustin who likes to torment T.J. Piper Laurie is excellent as Paul’s mother who is trying to cope with the loss as well as trying to make herself feel useful as she befriends Hesher. Rainn Wilson is terrific as T.J.’s father Paul who is just trying to deal with loss as well as T.J.’s growing sense of anger. Natalie Portman is wonderful as Nicole, a young woman whom T.J. has a crush on as she is someone trying to deal with her own existence while being aware that she is very flawed.

Devin Brochu is great as T.J., a teenager who is trying to cope with the loss of his mother as Brochu brings a real sense of determination of a kid who is eager to save the one piece of the loss he had in a car while dealing with the antics of this strange being in Hesher. Finally, there’s Joseph Gordon-Levitt in an incredible performance as the titular character where there’s a lot of attitude to his performance as well as a physicality to display how dangerous he is. It’s Gordon-Levitt at his best as it’s a truly fearless performance for an actor who is already proving his versatility into playing any kind of role.

Hesher is an excellent film from Spencer Susser that features a towering performance from Joseph Gordon-Levitt. Along with strong supporting work from Devin Brochu, Rainn Wilson, Natalie Portman, and Piper Laurie, it’s a film that plays into the world of grief and mayhem while not being afraid to be a bit sentimental. Fans of Gordon-Levitt’s work will no doubt see this as one of his most essential performances. In the end, Hesher is a remarkably thrilling and chaotic film from Spencer Susser.

Maybe there was something here that I missed or just didn't get, but some of this was too weird for me to watch. JGL was good as Hesher, but his character was just such an empty dick that I really had no idea what he was going to do next, and to be honest, I don't think he did either. Basically, there was no real idea behind this character but the film still works. I don't know how, it just does in it's weird, indie-way. Nice review Steve.

I'm glad that you enjoyed this one - I thought it was one of the most underrated films from last year. Joseph Gordon-Levitt was great in it!

One of my favorite films from last year. Its uncoventional storytelling is used and executed very well, I totally agree. Also, great performances from JGL and the supporting cast.

This does sound like an excellent film, though I have a feeling it will be painful to watch. I enjoy movies with character driven stories, and this sounds right up my alley. Thanks for the wonderful review.

@Dan-I think the point is that he is unpredictable but he's not a total dick. Those scenes he had with Piper Laurie showed that he cared for her and was willing to share some pot with her.

@Stevee-It is underrated. I wish it got a better theatrical release.

@Leysa-Who needs plot when you have JGL being an anarchist who listens to Metallica and Motorhead?

@Stephanie-It's a bit painful because it's a film about grief but also unpredictable because of JGL's character.

Steven, please, don't publish this comment. I wanted to send you an email regarding this but haven't found it in your profile. Anyway, it's nothing special, but just wanted to let you know that my name is Lesya, not Leysa. For the record, I'm not offended, but you've always called me like that and I finally thought that I should tell you about this little mistake :)

@Lesya-Oh, I'm sorry about that. I'll try not to do that again.

I had a bit of a problem to fully embrace this film since Hesher is such a dick. I guess the idea is that he's an "chaotic force" but it didn't quite work out for me. I couldn't help comparing it to Rabbit Hole, also a story about a family stuck in deep grief, which I thought worked better at an emotional level. The weirdness just didn't add so much, it mostly alienated me. JGL is great though, as always. I picked up this film in a store saving it from a bargain bin since my daughter is such a fan of his.

It's an ok movie, but I'm afraid I couldn't fully embrace Hesher since the character was such a dick. Sure, he was supposed to represent chaos, but it had the effect that it alienated me a bit.

I couldn't help comparing it to Rabbit Hole, also about a family in grief, but which worked much better at an emotional level.

@Velvet-I agree that the character is a dick but that's what makes him so interesting. I also agree with you that Rabbit Hole is a better movie since that had a better view on the idea of grief.

I have this in my Netflix queue, although it's getting such a beating there that I'm glad to see some positive stuff about it. I'm suddenly looking forward to its arrival again.

@Alan Grimm-It's not a film for everyone but it's certainly got a compelling story with a character that is unlikeable but certainly engaging.