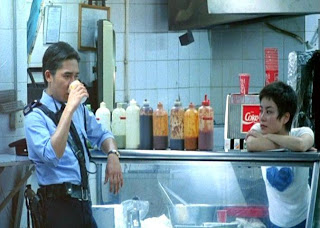 I'm aware that it's been nearly 2 months since the last time I've done this but a lot has happened. Particularly on a personal level where if anyone did read my last month's end of the month post. I went to the hospital for a few days for stress as I'm right now doing OK but I feel tired all the time. I'm pretty worn out and I've been having mood swings. It seems like I'm back in depression mode again though I'm not sure how severe it is though I'm currently taking medication for the time being.

Due to my condition for the time being, my film viewing output has slowed considerably as I've paced myself more in watching films. Particularly longer ones at over two hours or two-and-a-half hours, depending on the film, where I'll watch an hour and a half of it and then stop and watch the rest a few hours later. It's often because I would feel tired to the point that I need to rest or something. Plus, I would have to write something down immediately just so I can come back and process everything in my head.

Aside from the Bond marathon and the essays that I've been doing, there was supposed to be a few things I was supposed to do but the stuff like watching a few Werner Herzog films I hadn't seen as well as a mini-Samuel Fuller marathon are now being pushed by the wayside. Either I don't have time for them or I'm just into something else for the time being. I can't predict everything I want to see as I would schedule everything else days before I see the film and have a review prepared. Right now, the output is slowed a bit but at least I'm doing something.

In the world of the blogosphere, there's a lot going on.

There's a lot of reviews of The Dark Knight Rises that I think people should seek out. Among them are Courtney of Big Thoughts from a Small Mind, Red Georges @ Anomalous Material, Ryan of The Matinee, Dan @ Dan the Man's Movie Reviews, Film Intel, Norma @ The Flick Chick, Andy @ The Film Emporium, Stevee of Cinematic Paradox, Phil on Film, Sam of Duke & the Movies, Alex of And So It Begins..., & MovieNut14 @ Defiant Success.

Alex of Film Forager has a great review of one of my favorite films in Trois Couleurs-Bleu.

Jake of Not Just Movies has a review of Alps that has me interested in Yorgos Lanthimos' new film that has definitely divided audiences.

Bonjour Tritesse has a review of Lindsay Anderson's If... that I really want to see as I hope to watch it for next year's Cannes marathon.

Corey of JustAtad reveals Why He Loves Movie Theaters in a very compelling and poignant piece.

Sati of Cinematic Corner has a great visual parallel on Mulholland Dr. and Young Adult.

John of John Likes Movies has been doing a James Bond marathon of his own where he has some very kind words for Timothy Dalton as James Bond and I felt Dalton doesn't get enough credit as Bond. He is really underrated.

Diana of Aziza's Picks has a review of another of my all-time favorites in Almost Famous which I still think is one of the great films of the 2000s.

Finally, there's Tyler @ Southern Vision who lists The Piano Teacher as one of his favorite films and it's a film I hadn't seen in a while and hope to revisit. I do remember that ending and how unsettling it left me.

Well, that's it for today. In the coming days of July, I will finally post my Auteurs piece on Christopher Nolan this coming Friday which I finally finished yesterday. I'll also be watching a few Ingmar Bergman films as well as a couple of Bond films. I'll also be starting my piece on Andrei Tarkovsky by watching a documentary on him as well as his first film Ivan's Childhood for next month's Auteurs piece. My Favorite Film series will continue as I'm still early in writing my essay for The Dollars Trilogy which I hope will come out somewhere in August. Until then, I'll close with some music I've been listening as I'm currently going through a synth-pop phase for the moment.

Sorry to hear about your health problems, hope you will feel better soon! Thank you so much for the link!

Thanks for the linkage Steve! Appreciate it brotha!

Thanks for the link Steven, it means a lot! I hope you feel better soon!

Thanks for those TDKR review links,I will check some and go to cinema to watch it this weekend.

Thanks for the shout out, and take it easy man. Looking forward to your Tarkovsky essay.

Take all the time away you need. From blogging, from intense film watching, whatever. You have an incredible site, and everyone will be here when you chose to return.

Take care of yourself.

@David-I hope you enjoy the film.

@Bonjour-I'll start work on Tarkovsky in the weekend as there's a Tarkovsky doc that I'll be watching.

@Alex-I'm taking a breather for a bit but I still like to blog. It's still the only thing that's keeping me going.

Sorry to hear you are not feeling great. Get well soon. When feeling down, jogging and exercise in general, works for me!

By the way, really like that tune by Ultravox

@Chris-I just downloaded a best-of album from Ultravox and I'm really into them since I saw a synth-pop doc some weeks ago on Youtube. Music was so much better back then.

While I appreciate the link, your health issues is really the only thing I care about here.

I hope you begin to feel better Steven. If you ever need someone to converse with, I'm more than willing.

Best of luck to you man.

@Sam-Thanks. I'm just trying to do things one day at a time. Plus, I'm taking a day off from watching films.