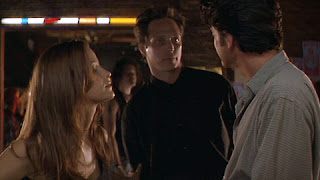 Based on the book Criss Cross by Don Tracy, The Underneath is the story of a man returning home to deal with his past as a criminal as he tries to make amends. Yet, his past catches up with him as he deals with his ex-wife’s new boyfriend. Directed by Steven Soderbergh and screenplay by Soderbergh and Daniel Fuchs, the film is a remake of the original 1949 film Criss Cross by updating it for the mid-1990s. Starring Peter Gallagher, Alison Elliott, William Fichtner, Joe Don Baker, Paul Dooley, Elisabeth Shue, and Shelley Duvall. The Underneath is an entrancing noir film from Steven Soderbergh.

After being freed from prison, Michael Chambers (Peter Gallagher) returns home for the wedding of his mother (Anjanette Comer) to armored truck guard Ed Dutton (Paul Dooley) as Michael hopes to start a new life. Though his police officer brother David (Adam Trese) remains suspicious of Michael’s intentions, Michael’s old life finally catches up when he sees his ex-wife Rachel (Alison Elliott) at a club where he tries to woo her again only to realize she’s engaged to the club’s owner Tommy Dundee (William Fichtner). While Michael recalls his life as a gambler where it led to all sorts of troubles, Ed gets Michael a job as an armored truck guard where he runs into a bank teller named Susan (Elisabeth Shue) whom he met some time earlier at a bus on his way home.

When Michael’s secret meetings with Rachel eventually leads to trouble with Tommy, Michael makes Tommy an offer he couldn’t refuse about planning a robbery at a bank to get a daily payroll. Tommy takes the offer to help Michael in a robbery but the result would prove to be troubling for Michael’s conscience as he eventually realize all of the things he’s been doing to get back his ex-wife.

The film is essentially the story of a man trying to make amends for his past deeds only to bump into his ex-wife and her new boyfriend where he eventually finds himself in trouble and in an even worse situation when he takes part in a robbery. It’s a story that is typical of what is expected in a film noir schematics as it would often involve a woman and a man in conflict over trying to start a new life and be involved in a world of crime. Yet, what makes this film so interesting is how the story is told through recollections and how everything leads up to this ill-fated robbery.

Under the Sam Lowry alias, Steven Soderbergh and co-writer Daniel Fuchs create a story where the film opens with the day of the robbery and then cuts to a scene of Michael Chambers coming home as he’s talking to Susan at the bus about going home. A lot of the film is told from Michael’s perspective as he recalls his life when he was this successful gambler who is in it for himself and his then-wife Rachel by giving her a better life only to crash because of one big loss. By returning home, he hopes to make amends but the presence of his ex-wife and trying to reclaim her would only cause trouble as he has to deal with her new boyfriend and his own brother who isn’t happy to see him home thinking he’s just going to screw things up like usual.

Sodebergh’s direction is truly mesmerizing for the way he creates moods in the film as well as the way he frames his actors for certain scenes. Notably as it’s all very stylized for a simple family dinner scene where there’s a close-up of someone on the edge while the other actor is in a medium shot talking. Yet, it’s Soderbergh creating something that is tense for a character like Michael Chambers as if he is trying to integrate himself back into the world. The film also features a lot of suspenseful moments and flashback scenes to see how Chambers fell apart or, in the case of the suspense, how far is he willing to screw things up again. It’s all about the lead-up to the heist and to understand who this man is that is playing part of a robbery that would eventually go wrong.

Since it’s a modern-day take on the noir genre, Sodebergh utilizes a lot of the schematics to what is expected in the genre. The set-up of the crime, a man in conflict, a femme fatale, a villain, and a surprise ending. While the first two acts carries a largely non-linear structure in the story where Soderbergh has the lead-up to the robbery crisscross against the narrative of Michael’s homecoming and his reunion with Rachel that would spell trouble. It’s the third act where the robbery and a troubling aftermath occurs that leads to some major surprises and revelations. Overall, Soderbergh crafts a truly hypnotic and wonderfully stylized noir film that plays with the genre’s plot devices.

Cinematographer Elliot Graham does amazing work with the film‘s stylized photography from the way he uses colored filters to set the mood to the interiors he shot in the club that Tommy runs as there‘s always something to see in those shots. Editor Stan Salfas does superb work with the editing to play out the film‘s unique non-linear structure to help build up the suspense for the eventual robbery that is to happen. Production designer Howard Cummings, with set decorator Jeanette Scott and art director John Frick, does nice work with the set pieces such as the home of Michael‘s mother as well as the look of the old house he and Rachel stayed in.

Costume designer Karyn Wagner does good work with the costumes as a lot of it is casual to keep up with the look of mid-90s fashion. Sound editor Larry Blake does terrific work with the sound to play up the atmosphere of the clubs to the intimacy of other locations to help build up some of the film‘s suspense. The film’s score by Cliff Martinez is brilliant for its mesmerizing electronic score to help set a mood for the suspense as well as the flashback as Martinez’s score is a major highlight. The film’s soundtrack features a wide mix of alternative music of the mid-90s as it features cuts from Better than Ezra and Cowboy Mouth as the latter appears as one of live bands in the club scenes.

The casting by Ronnie Yeskel does solid work with the casting as the ensemble features appearances from filmmaker Richard Linklater as a club doorman, Shelley Duvall as a nurse late in the film, Joe Don Baker as an armored truck supervisor, Anjanette Comer as Michael’s mother, Joe Chrest as a man Michael talks to at the hospital late in the film. Paul Dooley as the very kind Ed Dooley, and Elisabeth Shue as the very likeable new bank teller Susan whom Michael befriends. Adam Trese is very good as Michael’s brother David who doesn’t seem happy to see Michael back as he also has some strong opinions about his brother. William Fichtner is excellent as the intimidating Tommy Dundee who presses Michael over his relationship with Rachel as it’s a very strong performance from the character actor.

Alison Elliott is wonderful as Rachel where she’s a very lively character in the flashback scenes while in the present scenes is someone who isn’t happy to see Michael back in her life though she’s tempted by him. Finally there’s Peter Gallagher in a superb performance as Michael Chambers where Gallagher brings a very layered performance as a man trying to restart his life only to be tempted by the world of crime again as Gallagher shows a real sense of bravado and restraint to a man troubled by his own past and the world he’s about to re-enter.

The Underneath is a stellar noir film from Steven Soderbergh that is highlighted by Peter Gallagher’s marvelous performance. Along with great supporting work from Alison Elliott, William Fichtner, Adam Trese, Paul Dooley, and Elisabeth Shue. It’s a film that definitely finds way to keep the film noir alive in the mid-90s while it is also one of Soderbergh’s more underrated works. In the end, The Underneath is a chilling yet evocative film from Steven Soderbergh.

YES! Some love for The Underneath. I really dig this tiny noir thriller, and I'm glad to see you do too.

I think you and I are, what, maybe 2 of 14 people who have actually seen this? Bummer.

It was on Cinemax recently and I decided I needed to see it or else it wouldn't come on again. It's really underrated. It should be seen more.