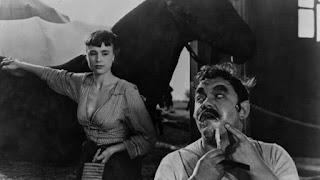 Written and directed by Ingmar Bergman, Gycklamas afton (Sawdust and Tinsel) is the story of a circus ringmaster who decides to see his estranged wife in order to see his young sons while his young lover is having an affair with an actor. Starring Ake Gronberg, Harriet Andersson, Hasse Ekman, and Gunnar Bjornstrand. Gycklamas afton is an extraordinary film from Ingmar Bergman.

Albert Johansson (Ake Gronberg) is a traveling circus ringmaster who is about to enter a small town that he hadn’t visited in three years. Albert is nervous because the town is home to his estranged wife Agda (Annika Tretow) who used to be part of the circus as he also hadn’t seen her or his two sons in three years. With things already troubled and half of the costumes lost, Albert decides to ask the town’s local theater director Mr. Sjuberg (Gunnar Bjornstrand) for help as Albert also brings in his mistress Anne (Harriet Andersson) to help out. Anne however, has caught the eye of a young actor named Frans (Hasse Ekman).

With the day of the performance still looming despite issues with the police, Albert intends to see Agda and his sons much to Anne’s dismay as the two are having issues where Anne threatens to leave the circus convinced that Albert wants to return to his wife. At Agda’s home, Albert learns about Agda’s new life where he confesses to Agda about what he wants to do. Meanwhile, Anne goes to the theater to see Frans as the two have a tryst where she becomes conflicted about her loyalty towards Albert. When the two return to the circus, a blowout eventually ensues as the two try to get ready for the day but emotions run high for Albert as he tries to defend Anne’s honor in front of his troupe against Frans.

While the film’s plot about a traveling circus ringmaster who returns home to visit his estranged wife and two sons is a simple one. It’s really more of an exploration of a man starting to feel lost in his world in the circus as he hopes to return home for a better life while he also starts to become tired of his young mistress who also wants a life outside of the circus. It’s a film that revels in the lives of this couple where a ringmaster and his mistress, a bareback horse rider, are dealing with the dreary life of the circus where morale becomes low over lost costumes, a sick bear, and a couple whose marriage is falling apart.

Ingmar Bergman’s screenplay examines the lives of this man who feels like he’s losing his lust for life in the circus and his love for his mistress as the only way he can have happiness is by returning to his estranged wife and the two boys he hadn’t seen in a while. Yet, he gets a rude awakening when it turns out that she doesn’t really need him nor do his sons who really don’t know who he is. It’s a huge moment of defeat that is furthered by more revelations about his own life and how he tries to maintain some form of liveliness when it comes to the climatic show in the third act.

Bergman’s direction is very startling from the close-ups he creates to display the characters lost in their own despair. With its evocative framing such as Anne walking to the stage to see Frans perform where she’s up close, Frans is shot at a medium position and there’s another person in the background. Bergman’s direction is very potent for the way he displays emotions in a simple scene while creating lively moments such as a flashback that involves a clown named Frost (Anders Ek) and his wife Alma (Gudrun Brost) where the latter was skinny-dipping in front of a group of soldiers during cannon practice. It’s among one of the moments of humor and craziness that occurs in a film that is mostly serious and dramatic. Notably in the latter where the performances are quite theatrical at times to display the emotions that run wild between its two main characters. Overall, Bergman creates a truly dazzling and mesmerizing film about loss and desire.

Cinematographers Hilding Bladh and Sven Nykvist do superb work with the cinematography from the heightened grain of the flashback scene involving Frost and Alma to the more hypnotic lighting schemes in the theater to display the contrasting world of the circus and the theater. Editor Carl-Olov Skeppstedt does excellent work with the editing by utilizing mostly straightforward cuts to play out the emotions of the film as well as a few dissolves to smooth out the transitions. Art director Bibi Lindstrom does wonderful work with the design of the theater play the actors are rehearsing to the look of the circus and wagons many of the circus people live and work at as it’s set during the turn of the century.

The costumes by Mago are splendid for the look of the times as well as the gorgeous clothing that Anne wears to display her youthful persona. Sound work by Olle Jakobsson is brilliant for the way sound is used such as the flashback scenes where the laughter of the soldier overshadows the conversations between Alma and Frost along with the way sound used in the theater scenes. The film’s score by Karl-Birger Blomdahl is terrific for its use of playful circus music mixed in with flute and woodwind arrangements to play up the film’s whimsical tone with some more heavier string and percussion instruments to play out the drama that would occur in the film.

The film’s cast is incredible for the ensemble that is created as it features notable performances from Curt Lowgen as Mr. Sjuberg’s assistant Blom, Erik Strandmark as the talkative circus worker Jens, Anders Ek as the melancholic clown Frost, Gudrun Brost as Frost’s lively wife Alma, and Gunnar Bjornstrand as the very revered theater director Mr. Sjuberg. Annika Tretow is very good as Albert’s estranged wife Agda who brings a very calm performance to a woman already content with her life while admitting that she does like Albert but not enough to have him around. Hasse Ekman is great as the dramatic Frans who tries to woo Anne into doing things where he would also push Albert into a climatic duel.

Harriet Andersson is wonderful as the conflicted Anne who loves Albert but also yearns for the youthful drive of Frans as Andersson also displays a thrilling sexuality in her performance that is truly engaging to watch. Finally, there’s Ake Gronberg in a marvelous performance as the troubled Albert Johansson who tries to deal with his loss for everything as well as his desire for a simpler life without complications as it’s truly larger-than-life performance for the famed Swedish actor.

Gycklamas afton is an excellent film from Ingmar Bergman that features remarkable performances from Ake Gronberg and Harriet Andersson. The film is definitely one of Bergman’s great early triumphs before his breakthrough in the late 1950s as it’s a film that people who are new to Bergman should seek out. In the end, Gycklamas afton is a delightful drama from Ingmar Bergman.

Nobody comments on this one? It's my personal favorite Bergman!

I just re-visited the film last night and the brilliant performances and Baroque style cinematography still shocked me.The new discovery is how sad this film is,perhaps the most devastating film Bergman ever made.If I make a top 10 circus films list,this one would rank high above others.

This film was a real surprise for me as I was into the performances as well as the story. I want to see more Bergman.