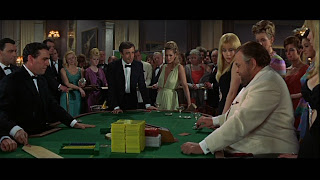 Based on Ian Fleming’s novel, Casino Royale is a parody film that makes fun of the James Bond franchise in which Bond comes out of retirement to deal with the deaths of fellow agents and face off against an organization called SMERSH. Directed by Ken Hughes, John Huston, Joseph McGrath, Robert Parrish, Val Guest, and Richard Talmadge with a screenplay by Wolf Mankowitz, John Law, and Michael Sayers. The film is a big-budgeted spoof where many people led by David Niven who plays a retired Sir James Bond. With a cast that also includes Peter Sellers, Orson Welles, Ursula Andress, Barbara Bouchet, Deborah Kerr, Jacqueline Bisset, Ronnie Corbett, and Woody Allen. The parody version of Casino Royale is a whimsical although extremely messy film.

With the world in danger by an organization named SMERSH, M (John Huston) and fellow spy leaders try to persuade Sir James Bond to come out of retirement to face SMERSH. Things suddenly go out of control when M is killed as Bond goes to M’s estate for the service where he meets M’s widow Lady Fiona McTarry (Deborah Kerr) who is really a double agent trying to capture Bond with the help of her women and others. Instead, the experience has her switching sides forcing Bond to return to the MI6 with a new Miss Moneypenny (Barbara Bouchet) with a plan to fool SMERSH by gathering many people posing as Bond.

With Moneypenny successfully seducing a man named Coop (Terence Cooper) to be Bond, Bond hires Vesper Lynd (Ursula Andress) to persuade gambler Evelyn Tremble (Peter Sellers) to be Bond in order to stop Le Chiffre (Orson Welles) who is trying to raise money to uncover his losses for SMERSH. Bond also decides to recruit his long-lost daughter Mata Bond (Joanna Pettet) to go to Berlin to uncover what Le Chiffre and SMERSH is up to as she succeeds for Tremble to travel to Paris at Casino Royale. Though Tremble was able to beat Le Chiffre, things go wrong forcing Bond to confront SMERSH and its mysterious leader.

The film is essentially a spoof on spy movies including the James Bond films where there’s lots of beautiful women in the film as well as silly situations where Bond has to face various nemesis and such. Yet, it is told in a very clumsy manner due to a screenplay that isn’t sure what it wants to be. The first act is about getting Bond out of retirement while it features this strong second act of Bond recruiting people to be James Bond that includes a baccarat master whose storyline is the most interesting since it plays true to the original Ian Fleming story. Then comes the third act where it becomes more uneven where it falls into loads of shenanigans where it’s funny at times but also takes itself way too seriously to be very funny.

The direction of the film is helmed by six filmmakers where the screenplay’s lack of cohesiveness really makes the film a mess. At times, the framing doesn’t carry much depth where an actor is at the edge of the frame barely seen. Still, there’s moments such as the sequences with Evelyn Tremble and Mata Bond that are very interesting. Notably the face off between Tremble as Bond and Le Chiffre despite some moments where it tries to be funny. The climatic reveal of the villain is definitely one of the film’s funny moments as well as its motivations. Yet, the direction at times tries to do a lot to entertain as well as keep up the times where it makes the whole film dated that included some silly psychedelic montages.

While some of the locations in Scotland is inspiring, the entire sequence that is directed by John Huston is uninspiring while the stuff involving Tremble, Lynd, and Le Chiffre by Joseph McGrath and Robert Parish is pretty good. The scenes with Woody Allen as Bond’s nephew Jimmy by Val Guest is hilarious though at times, does go overboard due to the climatic shenanigans that occurs as it features silly cameos from Jean-Paul Belmondo and George Raft. Overall, the film is a total mess where it tries to be a lot of things only to come out with so little.

Cinematographers Jack Hildyard, Nicolas Roeg, and John Wilcox do nice work with the photography for some of the interior Berlin settings as well as the look of the Casino Royale. Editor Bill Lenny does terrific work with the editing with some stylish montages in Tremble‘s kidnapping scene while some of the pacing goes into sluggish mode during the film‘s very farcical first act. Production designer Michael Stringer, along with art directors Ivor Beddoes, Lionel Couch, and John Howell, does fantastic work with the set pieces such as the place Mata‘s mother Mata Hari stayed at in Berlin to the Casino Royale and the secret SMERSH base.

Costume designers Julie Harris and Anna Duse do wonderful work with the costumes from the clothes the men wear as well as the dazzling dresses and 60s costumes the women wear. The special effects work of Cliff Richardson, Roy Whybrow, and John Richardson is quite good though very primitive at times such as the spaceship flying over London and other weird scenes. Sound editor Chris Greenham does excellent work with the sound such as Tremble‘s scene involving a large Scottish band. The film’s score by Burt Bacharach is superb for its playful music to emphasize the film’s humor with contributions by Herb Alpert and the Tijuana Brass that provides the film’s theme as well as a beautiful song by Bacharach and lyricist Hal David in The Look of Love sung by the late, great Dusty Springfield.

The casting by Maude Spector is quite incredible for the vast amount of people who appears in this film. A lot of them include cameo appearances from Jean Paul Belmondo as a French Legionnaire, George Raft as a coin-tossing man in the film’s climatic fight, Peter O’Toole as a Scottish band player, Geraldine Chaplin as a Keystone girl, William Holden as a CIA official, John Huston as M, Ronnie Corbett as a man in Berlin who is entranced by Mata, Anna Quayle as Mata’s Berlin teacher, Bernard Cribbins as Mata’s taxi driver to Berlin, Daliah Lavi as an agent Coop meets in his training session, Jacqueline Bisset as the agent Miss Goodthighs that Evelyn Tremble meets, Terence Cooper as a Bond agent in training, and Deborah Kerr as Lady Fiona McTarry whose overdramatic performance as a double agent is often one that isn’t fun to watch.

Barbara Bouchet is wonderful as the secretary Miss Moneypenny who is really Moneypenny’s daughter while Joanna Pettet is fun to watch as Bond and Mata Hari’s daughter Mata Bond. Woody Allen is hilarious in his small role as Bond’s bumbling nephew Jimmy Bond while Ursula Andress is excellent as the sexy yet determined Vesper Lynd. Orson Welles is very good as the whimsical Le Chiffre who likes to show off his gifts as a magician. David Niven is alright as Sir James Bond where he plays the character with a sense of charm and wit though he doesn’t seem to be the guy to really capture the sense of swagger that Bond is known for. Finally, there’s Peter Sellers in a superb performance as Evelyn Tremble where Sellers plays the role very straightforward and low-key while doing a few funny bits as it’s one of Sellers’ more underrated performances despite the notoriety he brought to the production in his emphasis to play James Bond straight and to the point.

The 1967 spoof version of Casino Royale is a film where it’s engaging at times but an overall incomprehensive film that tries too hard to entertain. Due to the dated humor and lots of silly shenanigans, it’s a film that Bond fans will have a hard time watching despite its interesting second act. While the film does offer something for fans of Peter Sellers and Woody Allen, it’s not enough to give it a strong recommendation. In the end, Casino Royale is a film that doesn’t offer much to anyone unless they’re James Bond completists.

James Bond Files: The EON Films: Dr. No - From Russia with Love - Goldfinger - Thunderball - You Only Live Twice - On Her Majesty’s Secret Service - Diamonds Are Forever - Live & Let Die - The Man with the Golden Gun - The Spy Who Loved Me - Moonraker - For Your Eyes Only - Octopussy - A View to a Kill - The Living Daylights - Licence to Kill - GoldenEye - Tomorrow Never Dies - The World is Not Enough - Die Another Day - Casino Royale (2006 film) - Quantum of Solace - Skyfall - SPECTRE - No Time to Die

Yes, Casino Royale I agree tries too hard to entertain, a mess, which likely was caused by all those different directors that were attached to the project. Great cast,and worth a watch for fans of 007, but sadly a wasted opportunity.
Austin Powers was a better Bond parody for me!

So far as I'm doing the marathon, this is my least favorite film of the marathon though I'm aware that things might get worse.

I agree that Austin Powers is a better parody, notably the first two films. The third one sucked though and I don't want a fourth film.

I saw this as a kid. I'll always remember the pre-Airplane gag where it shows some parachutists jumping out of a plane, each one yelling "Geronimo!" as he jumps. Then an Indian jumps out of the plane and yells "Me!"

@Chip-That scene was one of the few funny moments though I think I remembered that gag in Hot Shots! Part Deux!.