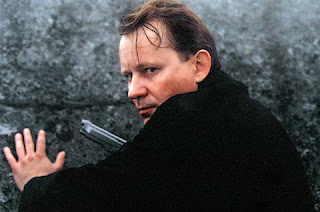 Directed by Erik Skoldbaejrg and written by Skoldbaejrg and Nikolai Frobenius, Insomnia is the story of a detective who goes to the Arctic Circle to investigate the murder. Things eventually go wrong as the detective suffers from insomnia as he also deals with guilt and a mysterious individual who might know something about the murders. Starring Stellan Skarsgard, Sverre Anker Ousdal, Bjorn Floberg, Gisken Armand, and Maria Bonnevie. Insomnia is an entrancing and eerie suspense film from Erik Skoldbaejrg.

After the death of a young woman named Tanja (Maria Matheison), a Swedish detective named Jonas Engstrom (Stellan Skarsgard) is sent to Trosmo near the Norwegian Arctic region with his Norwegian partner Erik Vik (Sverre Anker Ousdal). After talking to Tanja’s boyfriend Eilert (Bjorn Moan) about what happened that night, he claims that he didn’t kill her though Jonas remains unsure until Tanja’s backpack was found near a shed. When Jonas and Erik along with a team decide to drop the backpack to catch the killer, something goes wrong when Jonas does something that would impact his whole investigation and everything else he would deal with.

With Hilde Hagen (Gisken Armand) is asked to investigate Erik’s shooting, she also is asked to aide Jonas in the investigation as Jonas goes on his own for answers as he starts to suffer from insomnia due to midnight sun in the region. After getting some answers from a classmate of Tanja in Froya (Marianne O. Ulrichsen) about the expensive clothes that Tanja wore, she claims it was from some guy she met as he believes to be a writer named Jon Holt (Bjorn Floberg). After finally reach Holt with questions, things become more intense as Jonas decides to deal with Holt himself as Hagen wonders what is going on with Jonas as she’s convinced that Holt is the one as she also raises more questions about what happened to Erik. With Jonas losing his grip on reality, he asks Holt one more time about what happened leading to huge revelations over Tanja’s death.

The film is about a detective who descends through madness in his investigation to find a killer only to deal with guilt and insomnia as the latter has him be in a strange world where it’s often very sunny or still day during the rain. During his investigation, he would do things to cover up a blunder that he had created as he would later see ghosts and do things that would hinder the investigation for his own reasons. Especially when he suspects a writer who might’ve done the whole thing as he’s revealed to be a formidable opponent for the detective. Adding to the turmoil is a local detective handling another investigation as she is a lot smarter than he wants to believe.

The screenplay that Erik Skoldbaejrg and Nikolai Frobenius create is filled with a lot of suspense as well as repetition where there’s moments of flashbacks used to establish Jonas Engstrom’s guilt over what happened in a moment of confusion. The screenplay succeeds in the characterization of Jon Holt who is just a writer that likes to do certain things though it is unclear whether he did kill her other than that Tanja’s death was accidental in the film’s opening scene. A lot of it drives Engstrom to cover up certain things relating to his partner’s death as well as the fact that he wants to catch the killer for himself not for any personal gain but to understand why this girl is killed and why the killer was so meticulous in covering it all up.

Skoldbaejrg’s direction is truly mesmerizing from the opening scene of Tanja’s death to the way the Trosmo looks as the whole film is shot during the day as there’s no sense of night. Something that would bother Engstrom throughout the course of the film as there’s also an eerieness to the story as characters who are dead would reappear as if they’re ghosts haunting Engstrom to do what is right or to recall dialogue spoken earlier in the film. With these hypnotic compositions of the locations and some interior shots of the buildings, Skoldbaejrg’s direction is truly engaging for the way the suspense is built and the haunting quality he creates in how he sees a man descend into madness. Overall, Skoldbaejrg crafts a truly engrossing suspense film that does a lot for what is expected in the genre.

Cinematographer Erling Thurmann-Andersen does great work with the cinematography with the graininess of the film‘s opening scene to the more de-saturated look of the locations to play up the sunny look of the locations in some spots including some wonderful interiors to help set a mood for Engstrom‘s state of mind. Editor Hakon Overeas does excellent work with the editing to utilize rhythmic cuts to play up the suspense and pacing while using a few jump cuts for some of the conversations that goes on. Production designer Eli Bo does nice work with the set pieces such as the hotel room that Engstrom stays that includes the way he covers up the sunny window from the light to the look of the reception at the hotel.

Costume designer Runa Fonne does terrific work with the costumes from the suit that Engstrom wears to the more fashionable 90s clothing the younger women such as Froya wears. Sound designer Randall Meyers and sound editor Erik S. Watland do superb work with the sound to play up the suspense such as the gunshots and clanging objects to the sparseness of the shed near the bay. The film’s score by Geir Jenssen is wonderful for its low-key sound of pianos and ambient textures to play up the chilling tone of the film while the rest of the soundtrack is a mixture of pop and rock to play up the youthful world that Engstrom is trying to uncover.

The film’s cast is phenomenal for the ensemble that is created as it includes some notable small roles from Frode Rasmussen as the police chief, Thor Michael Aamodt and Kristian Figenschow as a couple of detectives, Maria Mathieson as the victim Tanja, and Marie Bonnevie as the hotel receptionist Ane whom Engstrom befriends. Other memorable small roles include Marianne O. Ulrichsen as Tanja’s classmate Froya, Bjorn Moan as Tanja’s boyfriend Eiert, and Sverre Anke Ousdal as Engstrom’s partner Erik. Gisken Armand is excellent as the intelligent Hilde Hagen who takes up the investigation over Erik’s shooting as she is proven to be a formidable opponent on the side of good for Engstrom as she knows there’s more to the case than what’s been presented.

Bjorn Floberg is great as the mysterious Jon Holt whose restrained charm and wit provides the right notes that Engstrom needs to play against as Floberg brings a real sense of determination of a character who may or may not have killed someone intentionally. Finally, there’s Stellan Skarsgard in an incredible performance as Jonas Engstrom where Skarsgard brings a restraint to his role as a man dealing with guilt as well as displaying a weariness to his character as he descends into madness.

Insomnia is a remarkable suspense film from Erik Skoldbaejrg that features a chilling performance from Stellan Skarsgard. Fans of suspense films will no doubt see this as a smart and wonderfully-crafted film that plays up to the world of mystery and madness. Notably in the latter where it follows a character driven by guilt and obsession as he tries to do the right thing only in the wrong way. In the end, Insomnia is an excellent suspense film from Erik Skoldbaejrg.

Now, I have seen the 2002 remake by Christopher Nolan starring Al Pacino and Robin Williams but am yet to watch this one. Your review has really geared me up... I will try to watch it very soon. Thanks :-)

Tonight, I'm going to watch Nolan's remake as I downloaded it last night to save me the trip from going to the local library which supposedly don't have a copy of the film.

This might contain my favorite Stellan Skarsgard performance. That's a tough call, but by any estimation, he is sensational here.

As a whole, I like that this is darker than Nolan's remake. Not necessarily better, just different. I really need to check it out again.

@Alex-Stellan is one of the reasons why I prefer this film more than Nolan's version. It's because Skarsgard is a guy who is more likely to fall apart and he almost becomes insane towards the end.