007 James Bond Marathon: The Man with the Golden Gun 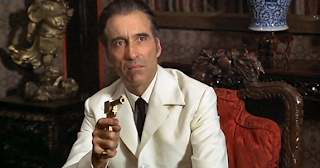 Based on Ian Fleming’s novel, The Man with the Golden Gun is the story of James Bond facing off against an assassin who has created a device that can harness the power of the sun during an energy crisis around the world. Directed by Guy Hamilton and screenplay by Richard Maimbaum and Tom Mankiewicz, the film has Bond traveling to Hong Kong and Thailand as he faces a man who can kill someone with just one bullet with his golden gun as Roger Moore plays James Bond once again while Christopher Lee plays the titular character in Francisco Scaramanga. Also starring Britt Ekland, Maud Adams, Herve Villechaise, Soon-Tek Oh, Clifton James, Desmond Llewelyn, Lois Maxwell, and Bernard Lee as M. The Man with the Golden Gun is a thrilling and comical film from Guy Hamilton.

After receiving a bullet with his name, James Bond learns that renowned assassin Francisco Scaramanga is after him. After traveling to Beirut to retrieve a bullet from a belly-dancer (Carmen du Sautoy) who kept it as a souvenir from an agent killed by Scaramanga. Bond then travels to Macao to find the man (Marne Maitland) who created the bullet for Scaramanga where he sees Scaramanga’s mistress Andrea Anders (Maud Adams) taking a box back to Hong Kong where she was staying. After getting answers from her, Bond goes to a club to see if he can find Scaramanga only for another man killed who had a solar device object called the Solex stolen. After a briefing from M about retrieving the object to help solve the ongoing energy crisis, Bond teams up with Hong Kong agent Lieutenant Hip to go back to Macao for further investigation with Bond‘s aide Mary Goodnight (Britt Ekland).

Going to the home of industrialist Hai Fat (Richard Loo), Bond pretends to be Scaramanga to discuss the death of a man who has the Solex device as the plan later backfires as Scaramanga is at Fat’s home. With the help of Lt. Hip and his nieces, Bond is able to escape as he later meets Anders who reveals some information about Scaramanga and the Solex device. At a kickboxing arena, Bond gets the Solex device but gets a bigger surprise when he meets Scaramanga and his assistant Nick Nack (Herve Villechaise). After Bond secretly gives the Solex to Lt. Hip who gives it to Goodnight, Goodnight sees Nick Nack get into a car where she tries to put a homing device only to be put in the trunk by Scaramanga leading to a car chase that involves a visiting J.W. Pepper (Clifton James). After finding where Scaramanga is hiding out, Bond confronts him to learn what Scaramanga is up to as it leads to a duel between the two men.

The film is about James Bond dealing with a top assassin who plans to monopolize the solar power energy in the wake of an energy crisis as the assassin also wants to face Bond in a duel over who is the best killer. That’s pretty much it since it is typical of the schematics of what is expected in a Bond film. Yet, what makes it so interesting is the villain itself in Francisco Scaramanga. A man who is always offered a million dollars to kill someone due to his reputation and always gets the job done. The film’s opening scene establishes who he is and how good he is by knocking off a gangster (Marc Lawrence). Yet, having James Bond killed in his own hands would be the centerpiece of his killings prompting Bond to find him first before Scaramanga has him killed.

That’s the set-up of the entire story as Bond has to do whatever he can to find this assassin before he gets killed yet he would face numerous challenges as he’s also trying to finish a mission that concerns a solar device that could help bring solar power to the world. While the screenplay does manage to get that story be used as a nice subplot that eventually comes together with the Scaramanga plot. The script’s drawback is due to the fact that it’s not linear as it could’ve been while some of the comical elements involving J.W. Pepper were really unnecessary as if it was another film.

Guy Hamilton’s direction is definitely vast in terms of the locations that is set in the film such as Macao, Bangkok, and Hong Kong where it has Bond exploring another world. There, he delves into the world of martial arts where Bond is sort of an expert as he has to face up against numerous enemies while it the martial arts sequences do have a sense of humor. While the humor of the film is certainly engaging, it does go a little overboard as the presence of J.W. Pepper really bogs the film down where he may have been funny in Live and Let Die. In this film, he isn’t really needed as he’s nothing more than a distraction from the main story of the film. Despite the flaws the film has, Guy Hamilton does manage to succeed in creating a Bond film that has all of the entertaining value as well as carrying the air of suspense that is needed.

Cinematographers Ted Moore and Oswald Morris do excellent work with the photography such as the beautiful exteriors of the city locations and the large wide depth of field shots of the sea along with interior shots of the sets including the casinos in Macao. Editors Raymond Poulton and John Shirley do superb work with the editing by keeping things straightforward including some rhythmic cuts to play out the suspense and action. Production designer Peter Murton, along with art directors John Graysmark and Peter Lamont, does brilliant work with the set pieces such as M‘s office in the RMS Queen Elizabeth ship as well as the home base of Scaramanga.

The visual effects work of Derek Meddings and special effects work of John Stears do terrific work with the special effects work such as the miniatures for Scaramanga‘s islands and home base along with the solar laser. Sound recorder Gordon Everett does nice work with the sound to play up the atmosphere of the crowd scenes as well as more intimate moments in the climatic duel scene. The film’s score by John Barry is fantastic for the way the suspense is build up as well as the action that occurs. The title song co-written with lyricist Don Black and sung by Lulu is a wonderful song that plays to the bombast of the film with its orchestral flourishes and swanky rock arrangements.

The casting by Weston Drury Jr. and Maude Spector is incredible for the ensemble that is created as it includes appearances from Carmen du Sautoy as the belly dancer Bond tries to woo, James Cossins as the arms expert Colthorpe, Marne Maitland as the arms maker Lazar, Marc Lawrence as an ill-fated opponent of Scaramanga in Rodney, and Richard Loo as Scaramanga’s boss Hai Fat who tries to outwit Bond. Bond regulars such as Desmond Llewelyn as Q and Lois Maxwell as Miss Moneypenny are excellent in their roles while Bernard Lee is great as usual as the stern but always resourceful superior M. Soon-Tek Oh is excellent as Lt. Hip who aides Bond in his assignment while Clifton James as J.W. Pepper isn’t as funny due to the fact that he’s just repeating the same schtick he did in Live and Let Die.

The late Herve Villechaize is fun to watch as Scaramanga’s assistant Nick Nack who helps Scaramanga do dastardly deeds while proving to be a challenge for Bond. Maud Adams is superb as Andrea Anders, Scaramanga’s mistress who gives Bond information about the Solex as well as revealing some revelations about Scaramanga. Britt Ekland is quite terrible as Mary Goodnight for the fact that Goodnight is a total dimwit who either puts herself in a bad situation or will accidentally do things that just causes trouble as she is definitely one of the worst Bond girls in the history of the Bond franchise.

Christopher Lee is incredible as Francisco Scaramanga where Lee displays a great sense of charm in his role as the assassin while proving to be a man who displays a big ego that only Lee can bring as he definitely creates one of the franchise’s great villains. Roger Moore is excellent as James Bond where Moore maintains his low-key sense of humor while showing more restraint when it comes to the action and suspense as he makes Bond more about getting the job done and not get killed as it’s one of Moore’s finer performances as Agent 007.

While it may not be ranked among the list of the best Bond films, The Man with the Golden Gun is still a thoroughly fun film from Guy Hamilton. Thanks to the performances of Roger Moore and Christopher Lee, the film does have enough adventure for fans to enjoy despite its flaws. In the end, The Man with the Golden Gun is a stellar film from Guy Hamilton.

James Bond Files: The EON Films: Dr. No - From Russia with Love - Goldfinger - Thunderball - You Only Live Twice - On Her Majesty's Secret Service - Diamonds are Forever - Live and Let Die - The Spy Who Loved Me - Moonraker - For Your Eyes Only - Octopussy - A View to a Kill - The Living Daylights - Licence to Kill - GoldenEye - Tomorrow Never Dies - The World is Not Enough - Die Another Day - Casino Royale (2006 film) - Quantum of Solace - Skyfall - SPECTRE - No Time to Die

I love the Roger Moore Bond movies,and this is one of my favorites. That tropical island he visits is beautiful.
Actually, Nick Nack got his own tv-show in 1977 called Fantasy Island.

As you say, this Bond entry is really fun, the karate school, the stolen red sports car, I could go on and on...I know some find them too silly, but since 1985, I don't think 007 has been as enjoyable. I agree that song by Lulu is wonderful, and Ch Lee was born to play the villain ( :

I grew up watching the Roger Moore films so I have a soft spot for Moore as I like his work as Bond. Yet this is really just revisiting all of these films for the marathon before the release of Skyfall.

Of course, I couldn't help but think of "Boss, the plane, the plane!" when I think of Herve.