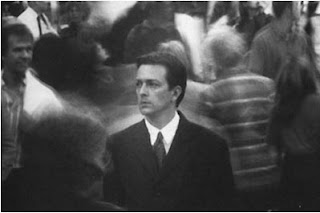 Written, shot, co-edited, and directed by Christopher Nolan, Following is the story of a man who follows strangers around London where one of the strangers he follows lead him to a dark underworld that he has become entranced by. The film is a neo-noir story that revolves around memories as it would later play to the themes that Nolan would explore in the years to come. Starring Jeremy Theobald, Lucy Russell, Alex Haw, John Nolan, and Dick Bradsell. Following is an eerie noir film from Christopher Nolan.

A young writer (Jeremy Theobald) who likes to follow around people in London has been following a man whom he’s intrigued by. Revealing to be a thief named Cobb (Alex Haw), the writer meets Cobb who likes to steal things from people’s home where he shows Cobb the ropes on how to be a thief. Taking on a different identity, the young writer starts to steal on his own where he falls for a beautiful blonde (Lucy Russell) who is having issues with a club owner (Dick Bradsell) where she claims to have photos that is in his safe. After stealing the owner’s safe, things go wrong when the writer realizes what is really going on as he is eventually interrogated by a police officer (John Nolan).

The film is about a young writer who likes to follow people where he eventually mimics the life of a thief only to get caught up in a dark world of theft, blackmail, and murder. A lot of it is told in a non-linear structure as it’s based on this young man talking to a police investigator as he reflects on everything that has happened. The screenplay does include a lot of exposition in how the life of a thief is told for the young writer to eventually figure out how to take on this life. Since the film plays to a lot of the schematics of the film noir, there has to be a femme fatale in the story as the blonde the young writer falls for isn’t exactly who she seems to be. Notably as there’s a twist that will occur late in the story to play up everything the young writer has endured.

Christopher Nolan’s direction is very entrancing for the way he presents the film as he creates an air of surrealism to its non-linear structure. A lot of it will include repeated images as well as the fact that the young writer would have a look that is similar to Cobb to make things confusing. Shot in black-and-white, the film has a very evocative look where it harkens to some of the early films of Stanley Kubrick while there’s a lot of hand-held shots to make it much more different. Notably as it features gorgeous yet eerie interior shots to play up the suspense as the overall work shows a young director making his mark with a solidly-crafted noir film.

Nolan and co-editor Gareth Heal do excellent work with the editing to play out the film‘s non-linear structure in the use of repetition and rhythmic cuts to play out the unconventional feel of the film. Art director Tristan Martin does nice work with look of the apartments the writer and Cobb rob including the nightclub where the blonde works at. The sound work of Ivan Cornell, David Julyan, David Lloyd, and James Wheeler is great for the atmosphere that is created in the robbery scenes in the way objects sound. The music of David Julyan is superb for its mixture of hypnotic ambient pieces to more thrilling electronic-driven music to play out the film’s suspense.

The casting for the film is incredible as it includes some notable small appearances from Dick Bradsell as the bald club owner the blonde feels threatened by and Christopher Nolan’s father John as the detective who interrogates the young writer. Lucy Russell is wonderful as the seductive blonde who is charmed by the young writer as she tries to get him involved in a crime that would cause trouble. Alex Haw is great as the thief Cobb who shows the young writer what to do in the world of theft while also being very shady about who he is. Finally there’s Jeremy Theobald in a marvelous performance as the young writer who starts off as this following slacker into a man that looks and plays the role of a professional thief only to realize the trouble he’s embarked on.

Following is a remarkable and clever debut film from Christopher Nolan. It is definitely a film that any fan of Nolan’s work should see as it would feature many small references to some of the work he would do in the years to come. Fans of noir films will definitely see this as a unique take on the genre in how it’s mapped out visually and schematically. In the end, Following is a brilliant film from Christopher Nolan.

I'm glad that you appreciate this film that much and I wholeheartedly agree. I think that it's even better than his later project, Insomnia, but it was not written by him, that's why it's obvious why even this little movie surpasses it (well, at least in my eyes).

Out of mere curiosity and, please, don't regard it as a reproach, do you ever review film that you dislike? I think you're the only blog that I know that delivers favorable reviews only :)

Ah, I love Following, so simple yet intricate. It's such a promising start to a director that has turned into a true visionary. Your review has definitely made me want to go back and revisit it.

I'm not a fan of Nolan but I never saw this one and now, waiting for The Dark Knight Rises, may be a good time to change that. Good review!

@Leysa-I've reviewed films I've disliked. It depends on the film and what is on at the time. If I have the urge, then I'll write a review of a film that I think sucks.

@Alex-I was surprised by this as the only film I need to re-watch is Insomnia but first, I need to see the original.

@Sati-See it! It's really an interesting debut with a lot of references to some of Nolan's future work.

I know I'm in the minority here, but I still think this is the best film Nolan has made at this point. It's a crafty little film without the bloatedness of his post-Insomnia work. Of course, I think his last four films are terrific, but he is at his best in a more concise piece like this.

@Josh-You have some points there though I wish the film was a bit longer.

This one didn't do wonders for me like it did for others, but what I liked most about it was how Nolan was able to do so much, with so little. Really, this flick looks like it was made entirely off of quarters and he is somehow able to make this compelling, twisty story work. Juts goes to show you that the guy had promise early on. Good review Steve.

@Dan-The low-budget aspect is what won me over. After all, limitations do help a filmmaker realize his/her vision no matter how little money and the circumstances they have to deal with.

This is THE greatest debut ever,I have seen it twice before I showed it to my film club in my last company.It showed so much talent and potential Nolan has in telling a story in such unique narrative fashions.

@David-Thank you. I was impressed by what I saw. I wish it was a bit longer. My Auteurs piece on Nolan is nearly done. I'm just waiting for The Dark Knight Rises to come out and then I'll post the piece so I can focus on Andrei Tarkovsky.