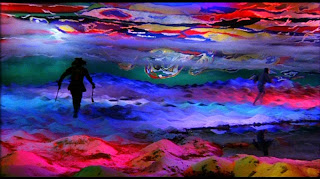 Directed by Akira Kurosawa with a script he co-wrote with Masato Ide, Kagemusha is about a poor-class criminal who becomes a double for a dying warlord during a troubled period in 16th Century Japan. With help from Francis Ford Coppola and George Lucas, the epic film shows Kurosawa leaning towards his ambitions and study of character in a broad setting. With a cast that includes longtime regular Tatsuya Nakadai, Tsutomu Yamazaki, Kenichi Hagiwara, Daisuke Ryu, Hideo Murota, and in his final appearance (in the full, uncut Japanese version), Takashi Shimura. Kagemusha is a superb yet provocative film from Akira Kurosawa & co.

A civil war is brewing between three warlords where Takeda clan leader Shingen (Tatsuya Nakadai) is facing Oda Nobunaga (Daisuke Ryu) and Tokugawa Ieyasu (Masayuki Yui) as the war is reaching its bloodiest. Aiding Shingen is his brother Nobukado (Tsutomu Yamazaki) who has just found a petty thief who looks exactly like Shingen as he convinces the thief to be his brother. The thief reluctantly takes the job with Nobukado helping out as Shingen's son Katsuyori (Kenichi Hagiwara) and General Yamagata Masakage (Hideji Otaki) are planning a siege on Ieyasu's castle. During the siege, Shingen is wounded by a gunshot wound after hearing a mysterious flute where his opposing warlords each have a different reaction to Shingen's assassination. Though Shingen nears death, he calls in his double to ensure that his enemies don't attack in order to buy some time for the next few years. After Shingen's death, Nobukado calls in the reluctant double to fill in his position as spies believe that Shingen is alive.

The news of Shingen's recovery disturbs his enemies where they each believe he's using a double while the double learns about Shingen's death as he becomes unsure about his role. Still, Nobukado helps him be more convincing despite not convincing Shingen's horse as he does manage to convince Shingen's grandson as the double finds comfort in the role of being a grandfather. Katsuyori is unhappy about the situation as he's forced to call this man his father in front of colleagues while Yamagata figures out what to do next following Ieyasu's attack on one of the Takeda castles. Katsuyori becomes frustrated with the double as he asks questions in an attempt to reveal the double's true identity only for the double to charm his way in front of the people at a meeting. Katsuyori decides to lead the battle against Ieyasu as things go out of control prompting Nobukado to make a move for the double to make his presence as Shingen.

Feeling overshadowed by the double and the presence of his late father, Katsuyori realizes that he'll never attain any kind of respect that he hopes for. With the three years closing by, a simple act of love and joy would destroy everything for the double. Even as he is forced to watch in horror on how Nobukado has been trying to risk everything for his clan.

While the film may seem like a typical samurai epic film, the film is really about a petty thief who becomes this outside voyeur having to watch the way warlords work and such while trying to understand the man he is playing and how he treats people and such. The film is really a study of character in not just the double but also Nobukado, who was his brother's double for a while.

The film is in some respect is about these two men while a brother is having to play puppet master on what the double should do yet be one of his few friends that included General Yamagata. Then, there's Katsuyori, a son who seemed to have gained little respect from everyone and his attempts to gain his father's respect is equaled by his frustrations and lust for glory and power. His greed is also his flaw where Nobukado knows why he is trying to do these things but his father wouldn't because Shingen is doing what a father does.

Kurosawa's script is very brilliant, notably in structure with the first act being about Shingen and the introduction of the double, the second act about the double being Shingen, and the third act is about the double's big mistake and climatic battle. Kurosawa's direction is solid and more theatrical in any of his previous films. Particularly the film's opening scene that is a six-minute shot with special effects for both Nakadai's performance as Shingen and double that is a single shot without any movement.

While the film starts off slow, Kurosawa's structuring of the script and his direction to convey the sense of tension and drama that goes on in these meetings works to show this world of 16th Century Japan. Most of the scenes are done with little edits for dramatic effect to convey the emotion of these meetings while the action and battle scene are done with great style as well as the editing by Kurosawa for the film's emotional aftermath in the final battle scene. Overall, it's a brilliant work from the Japanese auteur.

Cinematographers Takao Saito and Masaharu Ueda do amazing work with film's photography, notably for the exteriors where the look of the sunlight is just beautiful while the interiors are wonderfully lit to convey the intimacy of the meetings. Art director Yoshiro Muraki also does great work in the look of traditional Japanese homes to give the film a look of authenticity and prestige. The costumes by Seiichiro Hagakusawa is exquisite for the coloring of robes and costumes to convey that sense of royalty in the characters to maintain their presence and position of power.

Sound recordist Fumio Yanoguchi and effects editor Ichiro Minami does fantastic work with the use of sound to capture the intensity of battle as well as the tension preceding those sequences. The music of Shinichiro Ikebe is great for its use of traditional, Japanese drum music and intense, orchestral arrangement for some of the film’s dramatic moments as well as the battle sequences for its momentum.

The film's cast is superb with small yet memorable performances from Takayuki Shiho, Koji Shimizu, Noburo Shimizu, and Sen Yamamato as Shingen's servants, Kamatari Fujiwara as a doctor, and Kota Yui as the adorable grandson of Shingen. Hideo Murota is great as Shingen's bodyguard Nobufasa Baba while Hideji Otaki is also great as Shingen's leading general who gives his master criticism while trying to do what is right for the clan's survival.

Daisuke Ryu is brilliant as the vicious, deranged Nobunaga while Masayuki Yui is more subdued yet amazing as the intelligent, powerful Ieyasu. Kenichi Hagiwara is excellent as the reckless, greedy Katsuyori whose desire for glory and power is tested when he is forced to be son to the double of his father while trying to take control of his clan to the dismay of his elders.

Tsutomu Yamzaki is magnificent in his role as Nobukado, the man who is running everything yet understands the role of the double who is playing his brother. Yamakazi's subtle, engaging performance is brilliant as he and Tatsuya Nakadai have amazing camaraderie with Nakadai providing great support as he is in some ways, the film's moral conscience who knows what kind of power his brother has and how the double should maintain it.

Tatsuya Nakadai is brilliant as the ruthless, powerful Shingen who has all the makings of a great leader but is more complex as the petty thief who becomes his double. Nakadai's performance is so exquisite, having to double duty in playing two leading character is a challenge but he did rose to that challenge. Nakadai's performance not only carries the film but also maintains its engaging tone in its emphasis on character study. It's an overall, fantastic and eerie performance from one of Kurosawa's great actors.

Kagemusha is a powerful yet poignant character-driven film from Akira Kurosawa and company. Thanks in large parts to the performances of Tatsuya Nakadai and Tsutomu Yamzaki, it's a great film of character study and loyalty set to one of Japan's most historical moments. While it's one of his essential latter-day films, it's also a worthy introduction of sorts to what Kurosawa was going through at the stage of his career. In the end, for a film that is profound in its character and presentation, Kagemusha is a film that is highly recommended to see.

Great analysis of an equally great movie by master moviemaker Akira Kurosawa. Tatsuya Nakadai is brilliant in both the roles, but as you mentioned mentioned he is a touch more impressive in the complex portrayal of the double. While Kurosawa often referred to Kagemusha as a dress rehearsal for Ran, IMO Kagemusha stands tall on its own and features amongst the very best works of the Japanese master.

Btw, I had written a review of Akira Kurosawa's Ran for my movie blog sometime back which can be read at:

I agree that Kagemusha is among Kurosawa's best work though the version I saw was the 160-minute international version that was distributed by George Lucas and Francis Ford Coppola. I'm eager to see the much longer version that features Takashi Shimura in a small role.

The next review of Kurosawa that I'm going to release is Ran and then I'm going to watch Dodesukaden this coming Saturday.

Terrific review of a Great movie! Though I much prefer Ran, Kagemusha is still an unforgettable masterpiece.

@Alex Jowski-I too prefer Ran though I think this is still a great film that prepares for what is to come from Kurosawa.

Thanks for the valuable information... I was not aware that a longer version of Kagemusha actually exists :-)