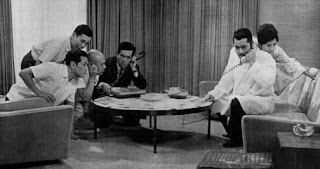 Based on Ed McBain's King's Ransom, Tengoku to jigoku (High & Low) is the story of an executive whose attempted coup against greedy executives is thwarted by the kidnapping of his chauffeur's son as two detectives go on the search for the boy. Directed by Akira Kurosawa and screenplay by Kurosawa along with Eijiro Hisaita, Ryuzo Kikushima, and Hideo Oguni, the film is an exploration of morality and sacrifice. Starring Kurosawa regulars Toshiro Mifune, Tatsuya Nakadai, Takashi Shimura, Kyoko Kagawa, Isao Kimura, and Tsutomu Yamazaki. Tengoku to jigoku is a marvelous, character-study driven film from Akira Kurosawa and company.

After battling executives at the National Shoe Company over the quality of shoe products, King Gondon (Toshiro Mifune) and his aide Kawanishi (Tatsuya Mihashi) ponder about staging a coup against his superior whome he worked with for 30 years. With his wife Reiko (Kyoko Kagawa) looking on, Gondo reveals the shares he's bought from the business in hopes to take over the company and rid all of the corruption in the business. Just as things were going well, Gondo receives a phone call that his son Jun (Toshio Egi) has been kidnapped as the kidnapper wants $30 million. Yet, Jun suddenly appears where Gondo realizes that the kidnapper has taken Jun's friend Shinichi (Masahiko Shimazu) who is the son of Gondo's chauffer Mr. Aoki (Yutaka Sada).

Already dealing with financial issues over his attempted takeover, Gondo turns to the police for help as Chief Detective Tokura (Tatsuya Nakadai) leads the investigation along with 'Bos'n' Taguchi (Kenjiro Ishiyama) and two young detectives in Arai (Isao Kimura) and Nakao (Takeshi Kato). After another call about the kidnapper who continues to press matters for Aoki, Kawanashi reveals his own move to protect himself forcing Gondo to make his own decision about his lifestyle. While Tokura applauds Gondo's plans despite what Gondo will lose, Tokura turns to help from his superior (Takashi Shimura) about any leads following Shinichi's return. After Aoki has revealed to doing his own investigation, he and Taguchi learn something horrifying about the kidnapper (Tustomu Yamazaki) and his accomplices. With Gondo becoming a public hero despite a huge financial loss, Tokura and his team make a breakthrough based on a drawing Shinichi has made. With the identity of the kidnapper revealed, Tokura would go on the search for the man as it would lead to a showdown between Gondo and the kidnapper.

The film is really about morality and what a man should do when everything he's worked has to be sacrificed at great risk. That's what the first act of the movie is about while the second act is about the investigation, the aftermath of the sacrifice, and trying to capture the kidnapper leading to a meeting between criminal and victim at the end of the film. There's definitely motivation from Takeuchi into why he put Gondo in such a big dilemma. What he didn't know is how much Gondo is willing to reclaim his life, even if he has to start over. At the same time, how much public sympathy Gondo would get as he faces his own exile from the company he worked with for so long.

The script Kurosawa and his co-writers create is part-character study for the first act and part-noir for its second act. Kurosawa's direction though is entrancing from start to finish. The first act is done mostly in the home of Gondo in the living room as if it's theater. With the actors in a position to figure out the drama through Kurosawa's composition, it's clear that the first act plays like a theatrical play. The second act becomes different yet works to figure out the motive of the kidnapper. Kurosawa becomes interested in how the kidnapped victim tries to recollect things while staging scenes where one character is in view while a smaller character is trying to watch what's going on.

The direction of Kurosawa is sublime as it's all shot in black-and-white with one notable special effect shot that plays to a huge dramatic moment of the film. The level of suspense and momentum Kurosawa creates is truly unique as he sets up scenes of the investigation for Tokura and his men to figure out what Takeuchi is going to do. The film in some ways does play like a cat-and-mouse type of game in both acts since Takeuchi is a strategist in the kidnapping thing. Yet, when he becomes the target, he tries to remain non-existent only until a recollection from his victim causes a major break in the investigation. Overall, it's a stylish film from Kurosawa that blends both film noir and character-driven drama.

Cinematographers Asakazu Nakai and Takao Saito do great work in the black-and-white photography with wonderful grey colors for the film's interior shots of Gondo's living room while the night-time exterior shots of Tokyo in the film's second act has this great, noir-like look. The notable shot of the pink smoke coming out of a factory is a great visual effects shot as the look of the film is exquisite. The editing by Kurosawa himself is wonderful in building its momentum and dramatic tension with his trademark, side-swipe style of transitional cuts and rhythm to give the film a smooth yet engrossing feel in its pacing.

Production designer Yoshiro Muraki does amazing work in the look of Gondo's living room in all of its traditional and contemporary mix of walls, floors, and appliances which is in great contrast to the shabby home of the kidnapper. Costume designer Miyuki Suzuki does fantastic work with the costumes, notably for Mrs. Gondo with her styles of clothes ranging from traditional to contemporary dresses. Sound effects editor Ichiro Minawa, mixer Hisashi Shimonaga, and sound recordist Fumio Yanoguchi do great work with the film's sound, notably the phone recordings and what appears in those tapes. Longtime collaborator and music composer Masaru Sato creates unique, traditional Japanese drum-style music for the film's opening credits along with light, bass-driven orchestral music for the dramatic tension along with use of Franz Schubert's Die Forelle for more dramatic moments.

The film's cast is unique with small but memorable roles from Jun Tazaki, Nobuo Nakamura, and Yunosuke Ito as the corrupt executives, Minoru Chiaki as a reporter, Toshio Egi as Jun, and Masahiko Shimazu as Shinichi. Other notable small roles like Kurosawa veteran Takashi Shimura as the chief investigator, and Isao Kimura and Takeshi Kato in their respective roles as the young detectives Arai and Nakao. Yutaka Sada is excellent as Mr. Aoki, the chauffeur who goes to panic when his son is captured while carrying the guilt as he feels responsible for Gondo's loss of power. Tatsuya Mihashi is also excellent as Kawanishi, Gondo's aide who betrays him only for his own gain and protection as a man who is a catalyst for the decisions Gondo makes. Kenjiro Ishiyama is superb as Tokura's aide Taguchi, a man who is filled with a lot of moral while questioning about the motives of the kidnapper and the world of Gondo.

Kyoko Kagawa is great as Gondo's wife, a woman who watches everything while wanting to know what's going on as she is aware that the decision her husband makes will change her life. Kagawa's performance is wonderfully subtle and understated as she's the person that grounds Gondo while remaining the traditionalist, Japanese housewife. Tsutomu Yamazaki is excellent as Takeuchi, the kidnapper with a real motive as he tries to destroy the life of Gondo.

Tatsuya Nakadai is brilliant in a great supporting role as Tokura, the detective leading the investigation as he tries to figure out how to bring justice. Nakadai's performance is very understated and done with such class, it's basically the best performance of the film. Finally, there's Toshiro Mifune in a great role as King Gondo. Mifune's performance is filled with a lot of tension, conflict, and despair as a man whose life is about to change by a decision aware of its consequences. Mifune brings a lot of drama and sadness to the role as a man who becomes victimized and coping with possible loss.

Tengoku to jigoku is an engrossing yet provocative film from Akira Kurosawa and one of his essentials thanks to Kurosawa's direction and its ensemble cast led by Toshiro Mifune and Tatsuya Nakadai. Fans of Kurosawa will no doubt see this film as essential while seeing it as a great translation to the work of Ed McBain. In the end, for a film that mixes character study and film noir, Tengoku to jigoku is the film to see.

I found the "High" section of the film a lot more engaging than the "Low" section, but I believe that was intentional on Kurosawa's part.

It's been some years since I've seen the film as I admit, the first half is stronger but the second half is still interesting from the perspective of the Tatsuya Nakadai's character. Especially as he's the one that has to find the kidnapper and bring him to justice for embezzling a man he never knew.

It's the morality theme is what I think is the film's strength because of what Toshiro Mifune had to do and the sacrifice he makes is far greater than the viewer wants to think it is. It's not just money but a whole lot more than that.