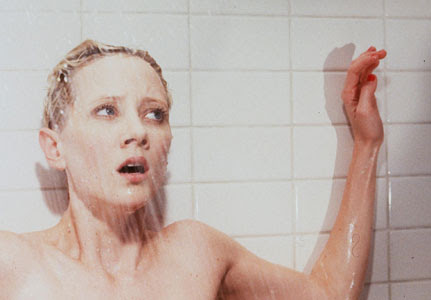 The 1998 remake of Psycho directed by Gus Van Sant is the story of a woman who steals money from her boss as she goes on the run and stops at a motel run by a creepy young man. When she goes missing, her sister and the woman’s lover try to find her with help from an investigator. Based on the original novel by Robert Bloch, the film is a shot-by-shot remake of the famed 1960 film directed by Alfred Hitchcock as Van Sant also uses the original adapted script by Joseph Stefano. Starring Vince Vaughn, Julianne Moore, Viggo Mortensen, William H. Macy, Phillip Baker Hall, Robert Forster, and Anne Heche. Gus Van Sant’s take on Psycho is among one of the worst ideas ever presented from Hollywood.

With her boyfriend Sam Loomis (Viggo Mortensen) in debt, Marion Crane (Anne Heche) wants to help him as she returns to work where she is given $400,000 to deposit for a customer. Instead, she steals it and goes on the run where she encounters a highway patrol officer (James Remar) and trade cars only to stop at a motel. Meeting its manager named Norman Bates (Vince Vaughn), Marion briefly converses with the man only to have something bad to happen. When Marion has disappeared, Marion’s sister Lila (Julianne Moore) asks Sam where she is. Instead, a private investigator named Arbogast (William H. Macy) is on the search for Marion only to meet Norman and disappear. Turning to a local sheriff (Phillip Baker Hall) for help, Sam and Lila figure out what is going on along with the mystery of Bates‘ mother..

Remakes allow filmmakers the chance to update things for a modern audience and try to put a new spin for a film to be its own. While some tend to stand out on its own, others tend to be cash-ins on these old films in an attempt to put asses in the seat. With Gus Van Sant’s remake of the revered Alfred Hitchcock film, Van Sant chose a more experimental approach by updating some of the dialogue, set it in the present, and do a mostly shot-by-shot take for the film with colored cinematography by Christopher Doyle. Something like this could be a good idea but it didn’t work.

Since it is a shot-by-shot remake where Van Sant tries to replicate the same compositions and framing that Hitchcock has done in the original 1960 film. Some of it seems intriguing but one of the key elements that made Hitchcock’s film so beloved is the way he builds suspense and take his time to set up the chills. Van Sant tries to go for the same thing but for anyone that saw the original will know what will happen. Then there’s the few things Van Sant adds to the film by updating the money ten times its original amount and setting it in present times with modern cars and various objects. Yet, it’s mostly through Kelley Baker’s sound design and Ann E. Duddleston’s editing but it becomes more of a distraction rather than a solid addition.

Part of what Van Sant does is during the intense killing scenes, Van Sant would add strange inserts in between the stabbings which ends up making the moment seem silly rather than chilling. Then there’s some of the sound work where the voice-overs remain in tact but they’re meshed with other voice-overs that become quite confusing. One notable scene where the sound adds to a scene is where Bates is peeping at Marion as she’s taking her clothes off. In the original, it’s just a simple scene of Bates looking where in Van Sant’s version, Bates masturbates. It’s among a lot of the things that doesn’t work throughout the film. One of them is Bernard Herrmann’s score which gets adapted by Danny Elfman where at times, the music is used in scenes where it didn’t need any.

There’s not a lot of what Van Sant does with his direction other than update a few key set pieces such as the Bates motel and Bates home. At the same time, in order to make the film more accessible to an audience of the late 1990s. The film has a pace that is a bit faster but for some reason, feels a bit longer which shows an inconsistency to its tone. While there’s some good work that Christopher Doyle provides with his colorful cinematography, it’s not noteworthy enough to make it stand out on its own. Overall, it’s a remake that doesn’t really do anything other than remind people that the original film remains better and there is no way in hell that a shot-by-shot remake could ever make it better.

Aside from notable contributions from production designer Tom Foden and costume designer Beatrix Aruna Pasztor to update the look of the film from the 1960s to the 1990s. There’s not a lot of technical elements that should be noted as the film’s soundtrack includes some faintly heard music from the likes of Rob Zombie, the Germs, Bill Frisell, and Danny Elfman providing a guitar piece for the film’s final credits.

The casting is one of the key elements of the film where there’s a few standouts in a sea of appearances including Gus Van Sant himself replicating Hitchcock’s own cameo where he has a Hitchcock imitator scolding Van Sant. The actors who do appear in the film includes Red Hot Chili Peppers bassist Flea as Sam’s clerk, Rita Wilson as Marion’s fellow secretary friend, Chad Everett as the client Marion steals from, Rance Howard as Marion’s boss, James LeGros as the used car dealer, James Remar as the highway patrol officer, Phillip Baker Hall as the sheriff, Anne Haney as the sheriff’s wife, and Robert Forster in a great appearance as the psychiatrist towards the end of the film as many of the actors chose to play these roles in a straightforward manner.

William H. Macy is pretty decent as Arbogast, the private detective searching for Marion as he chooses to play it straight the same way that Martin Balsam approached the role. Viggo Mortensen is OK as Sam Loomis as he adds a Southern drawl to the character to kind of make it his own while Julianne Moore is pretty good as Lila by making the character that Vera Miles played as somewhat more aggressive in her search to find Marion. Then there’s the two key roles of Marion Crane and Norman Bates where both Anne Heche and Vince Vaughn, respectively, take these famed roles. Unfortunately, neither could really do what both Janet Leigh and Anthony Perkins could do in these respective yet iconic roles.

Heche’s performance is truly one of the most horrendous performances ever captured on film as it was made at the time when Heche was mostly known as Ellen DeGeneres’ girlfriend and for being extremely outspoken. The performance Heche gives has an air of smugness that is very off-putting throughout the first half of the film. Yet, the highlight of her performance is to see her dead. Vince Vaughn’s performance as Norman Bates is a disaster because as good as an actor Vaughn is when he can be. He is completely wrong to play that character because not only does he fail to be charming and pull off the kind of innocence Perkins approach to that character. It’s also clear that once the audience sees his face, it’s obvious this guy has some problems as it’s a really terrible performance from Vaughn.

Gus Van Sant’s remake of Psycho is a misguided travesty that never should’ve been made in the first place. It’s film that reminds audience why the original is always going to be seen over and over again out of pure enjoyment. While it’s not fair to say that this is Van Sant’s worst film since it’s not really his film. It’s just that there not a lot of imagination to be put but rather serve as a weird experimental piece about why shot-by-shot remakes will never work. This is a film that should be avoided unless it’s for Van Sant completists wondering why this didn’t work. In the end, just watch the original Alfred Hitchcock version of Psycho and avoid Gus Van Sant’s remake.

I don't think there is anyone alive that prefers this Psycho to the Hitchcock original (even Van Sant himself.)

Great detailed post as always! Have refrained from reading your writings on Mala Noche and Drugstore Cowboy as I am going to watch them this week!

This remake was incredibly lame because it didn't bring anything new at all and I think Van Sant used this more as an experiment than an actual film. Nice Review my man!

@Cherokee-I wouldn't want to watch this again though I would buy the DVD if it was on sale for a buck just to be a Van Sant completist. Anyone who does think this film is better than Hitchcock's is simply talking out of their fucking ass.

@Dan-Thanks man. I think Van Sant was making something experimental but also wanted to satisfy Hollywood. I'm boycotting remakes right now (except for Fincher's The Girl with the Dragon Tattoo) because I'm yearning for people to actually make something original right now.