Originally Written and Posted at Epinions.com on 12/24/05 w/ Additional Edits. 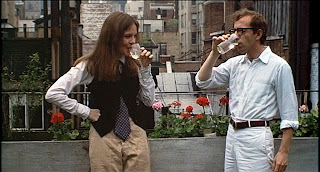 Throughout the late 60s and the 1970s, Woody Allen has made a career out of playing a neurotic, Jewish nerd who is smart but often questions things. Many of those films were often very funny but underneath the humor was a lot of questions about sex, life, and social themes. Still, Allen had inspirations to be the kind of cerebral director that he aspired to be like Federico Fellini and Ingmar Bergman. Then in 1977, Woody Allen released what many considered to be his first real masterpiece that not only combined his brand of humor but also some of the dramatic intelligence that would come into his later work. The film is called Annie Hall about a comedian's on-off relationship with a woman.

Directed by Woody Allen with a script he co-wrote with sometimes collaborator Marshall Brickman, Annie Hall is a neurotic romantic comedy set in New York City about two people who deal with their on-again, off-again relationship as a comedian ponders his own past relationships and his current one with Annie, played by longtime Allen muse Diane Keaton. While helping her increase her intelligence, she becomes insecure as they break up, then come back together until she achieves some success where a move to California begins to trouble things. With Allen playing comedian Alvy Singer, the film also stars Tony Roberts, Janet Margolin, Carol Kane, Shelley Duvall, musician Paul Simon, Colleen Dewhurst, and THE GREAT Christopher Walken. Annie Hall is a witty, strange tale of love set in one of the greatest cities of the world, New York City.

Throughout his love, Alvy has had troubling relationships and a cynical view on the world ever since he was a kid. When he was a 9-year old (Jonathan Munk) living under a roller-coaster with his bickering parents (Mordecai Lawner and Joan Newman) as he always had a fascinating interest with girls. Yet despite his modest success as a comedian, he’s always had troubles in his relationships with women where his first marriage to Allison (Carol Kane) fell apart because she wasn't attractive enough for him. Then there was a relationship with Robin (Janet Margolin) that never went well because of her New York socialite snobbery. Then during a double tennis date with his friend Rob (Tony Roberts), he meets Annie for the first time.

After learning of her strange behavior and neuroses while struggling to be a successful singer, he's become an unlikely supporter though she's found herself insecure by his intelligence. Though she's been through some bad relationships herself, even with an actor (John Glover) at one point, she does feel secure by Alvy. Now at present time, things between the two are troubling where she's late for a date to see a Bergman movie and because two minutes were already show, Alvy refuses to see the film. Worse when they went to see another movie, Alvy is forced to hear the meandering opinions of a man (Russell Horton) who Alvy knows that the guy knows nothing. Upset by Annie's desire to smoke pot before sex and her own intellectual insecurities, he signs her up for some classes so she can catch up with him. She does but only that it upsets him more.

After a visit to her family where he meets Annie's mom (Colleen Dewhurst), her Jew-hating grandmother (Helen Ludlam), he thinks that Annie’s Midwestern family background is all right until he meets Annie's creepy brother Duane (Christopher Walken) who spooks him, even as he drives them back to the airport. After a brief break-up where Alvy dates a reporter from Rolling Stone named Pam (Shelley Duvall), he gets a call from Annie who asks for him to kill two big spiders. They get back together where things seem to work out as her desire to be a lounge singer finally becomes successful. Then a man named Tony Lacey (Paul Simon) asks Annie to join him for a party. Alvy doesn't want to as Annie learns of his anal behavior. Then when Alvy is asked to do something for TV in California, he and Annie goes much to Alvy's disdain for the place. After getting sick and attending a party held by Lacey, things between him and Annie fall apart as he thinks of everything that goes wrong and his own behavior.

While it's not really a laugh-out loud, riotous comedy, the humor in Annie Hall is purely from the mind of Woody Allen who is really more questioning the things about relationships and the failures of them. While Allen and co-writer Marshall Brickman wants the audience to root for them, the ending is a bit complex in its optimism for the individuals while being realistic in how Allen sees things. While the film mostly focuses on Alvy's relationship with Annie, it reveals a lot of the things that goes on including some of the funny moments like the lobster in a pot scene, the attempt to try and do cocaine, and all of these other moments. It's pretty funny in a very natural way.

The directing style of Allen is purely inspired by Bergman and Fellini in the way he observes things. Where in some scenes, Alvy and Annie and whoever they’re with would observe things like their own past relationships with other people and their own family in some scenes. There's even a funny cartoon scene in how Alvy was the only who fell for the Wicked Queen in Snow White. It's just a simple, romantic comedy with all of the works. It's also very smart in how Allen views his humor since it's just more natural instead of being low-brow while he manages to take shots at other things including people's view on his favorite directors. The film has a lot of Allen's reference while mentioning a joke from Grucho Marx.

Helping Allen in capturing his vision of New York City is cinematographer Gordon Willis who does a great job in showing why New York City is a beautiful place though by 1976/1977, it was chaotic. The locations for New York are inspiring, especially in the interior scenes for the apartment by art director Mel Bourne who does a great job of capturing the look of the WASP-ish New York look. Editors Wendy Greene Bricmont and Ralph Rosenblum do a nice job tightening the film for its 93-minute running time where it's leisurely paced. The choice of music is filled with a bit of classical and jazz are wonderfully done for the film's tone. Finally, there's the costume designs by Ralph Lauren and Ruth Morley that is iconic, especially in the way Diane Keaton dresses which is wonderful and real to the somewhat socialite world of New York City as well as the world of California.

Finally, we have the film's big cast that includes cameos from Sigourney Weaver, Beverly D'Angelo, and Jeff Goldblum. There's also some nice small performances from Janet Margolin, Carol Kane, Shelley Duvall, Colleen Dewhurst, Jonathan Munk, Joan Neuman, Mordecai Lawner, and Russell Horton. One of the most memorable and best performance of the entire movie goes to... THE GREAT Christopher Walken who even though he's in a few scenes, has a hilarious, creepy moment as Diane Keaton's creepy, psychotic brother where he steals the show from Allen. Tony Roberts is funny as Alvy's best friend who often calls Alvy "Max" while telling him to move to California. Paul Simon is also good as Tony Lacey who woos his way into Annie's world .

The best performances easily go to the duo of Woody Allen and Diane Keaton as they carry the film with their quick-wit performances and a chemistry that was so natural together. Allen is hilarious as the neurotic, smart-aleck who seems to know everything only until the end, he realizes that he doesn't know anything. He's very anal, not really into new things, very aggressive when it comes to certain subjects, and is cynical despite his charms, humors, and intelligence. Sure, it's the same character Allen has played for many years but it's always worked. Diane Keaton fares much better as a kooky woman who always say things and doesn't mean what she says while pulling off some great clothing and looking very sexy while being very insecure about things and trying to understand herself as an individual. It's a great performance from Diane Keaton whose real last name is Hall.

While it's a film not for everyone, especially for those who are into low-brow humor. Annie Hall is still a wonderful gem from Woody Allen with great performances from Allen, Diane Keaton, and Christopher Walken. Anyone looking for an introduction to Woody Allen's work will definitely have a good place to start while other films like Crimes & Misdemeanors, Manhattan, and Hannah & Her Sisters are also essential. Still, anyone who is into neurotic, WASP-ish couples who are so perfect for each other despite their flaws should check out Annie Hall.

I was so delighted when I checked it out a couple weeks ago.

I agree, one of the best although I much prefer Hannah & Her Sisters and Crimes & Misdemeanors. Besides, I bet Star Wars fans still hates the fact that this film beat their beloved sci-fi adventure for the Best Picture Oscar.