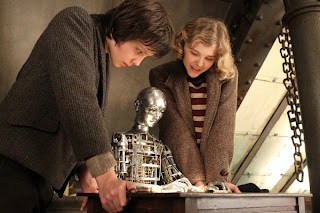 Based on the novel The Invention of Hugo Cabret by Brian Selznick, Hugo is the story of a young boy who lives secretly at a Parisian train station in the 1930s fixing clocks unbeknownst to anyone. When he meets a young girl, they uncover a secret from automaton that he and his late father try to repair which relates to filmmaker George Melies. Directed by Martin Scorsese and screenplay by John Logan, the film is a family adventure film where Scorsese also pays tribute to early 20th Century cinema. Starring Asa Butterfield, Chloe Grace Moretz, Sacha Baron Cohen, Jude Law, Emily Mortimer, Frances de la Tour, Christopher Lee, Helen McCrory, Michael Stuhlbarg, Ray Winstone, Richard Griffiths, and Ben Kingsley. Hugo is a dazzling film from Martin Scorsese.

Hugo Cabret (Asa Butterfield) lives alone at a train station in Paris where he fixes clocks throughout the station in secrecy. With his father (Jude Law) dead due to a fire at a museum and his uncle Claude (Ray Winstone) away, Hugo spends his time making sure the clocks work while stealing parts to fix an automaton that his father had found at the museum. Still, Hugo tries to evade the snoopy station inspector (Sacha Baron Cohen) while getting into trouble with a bitter toy shop owner name Mr. George (Ben Kinglsey) who notices that Hugo had been stealing as he also takes away his notebook. Hugo follows George to his home as he sees a young girl named Isabel (Chloe Grace Moretz) who notices Hugo outside as he asks for his notebook back.

Though Isabel was unable to retrieve the notebook, she befriends Hugo as the two go into an adventure where he introduces her to the movies. While Hugo’s talents to fix things did get George’s attention as he hires him briefly to fix things, Isabel’s interest in what Hugo is hiding as him showing her what he’s been doing. Since she has a key that is shaped like a heart, they managed to get the automaton working where they uncovered a big secret. Realizing that it has to do with a film that Hugo had seen years ago, they ask the help of a station librarian Monsieur Labisse (Christopher Lee) who tells them to go to the Parisian library about the history of film through a book. They meet its author Rene Tabard (Michael Stuhlbarg), a film historian who is a big fan of George Melies though he believes that Melies has died during the first World War.

With Isabel learning about George’s strange behavior and its reasons as she even asks her godmother Jeanne (Helen McCrory) about it. Yet, she and Hugo continue to try to uncover the mystery about Melies while Hugo tries to evade the station inspector. Particularly when Hugo receives news about his uncle as he tries to get the automaton to help uncover the secret about Melies.

While the film is about a young boy trying to repair an automaton to unveil a secret that he and his father wanted to unveil. It becomes much more once the film progresses into an adventure story about the boy and a girl where the secret they unveil involves the disappearance of George Melies. Throughout the story, there’s little subplots that involves the people that Hugo sees such as the longing attraction between a café owner (Frances de la Tour) and a newspaper seller (Richard Griffiths) and the station inspector’s infatuation with a flower girl (Emily Mortimer). It’s all part of the world that its titular character lives in as he is determined to finish his father’s work. What he would eventually do in relation to his own love for cinema is that he would take part into something much bigger.

John Logan’s screenplay is brilliant for the way he follows this young boy in his quest to uncover a secret that would unlock something that is very magical. Magic is part of the theme in the film as the mysterious George character is a man that seems to be lost and what he would find through Hugo would have him unravel as if he is trying to hide a secret. While the secret would be unveiled, the reasons for Melies’ disappearance would become more compelling as Hugo and Isabel would play into something where they could have the chance to resurrect Melies. Logan’s script definitely goes into the world of film and the idea of film preservation while creating a story that is truly thrilling and lively in what is expected for the adventure drama.

The direction of Martin Scorsese is truly divine in the way he chooses to present the film as more than just a tribute to the early days of cinema and film restoration. Instead, Scorsese creates a film where he can put his passion for cinema into a family adventure that is very engaging and exciting. From a wonderful tracking shot that follows Hugo in his world inside the station to the way he recreates 1930s Paris through visual effects and actual set pieces as it’s shot in a studio in London. Scorsese’s direction is very stylish from the way he shoots from above for conversation pieces to the way he allows the camera to be intimate and simple for conversation scenes.

Since it is an adventure film where Scorsese is able to create scenes that are very lively and thrilling. He’s also able to find a way to make the scenes involving Melies and his work into something that is more than just a love letter. The way he creates the world of Melies is by going into old-school cinema to see how they were made along with using footage of old movies ranging back from the first film made by the Lumiere Brothers back in 1895. There is a romantic element to the way Scorsese chooses to present these films and from the perspective of the two young kids. He recreates the idea of what it’s like to see a movie for the first time that is indescribable. What Scorsese does with this film is to prove that filmmaking is like magic as he creates what is a truly magical. Overall, Scorsese makes a film that is very accessible as well as being both entertaining and educational about cinema and its impact.

Cinematographer Robert Richardson does a glorious job with the film‘s colorful cinematography that is filled with a wonderful yet de-saturated look for some of the scenes involving Melies. The look for the rest of the film is quite straightforward with an element of style for the way the lights are set up as well as the dark look of the station deep inside where the look is more sparse and natural in its machine-like world. Longtime Scorsese collaborator in editor Thelma Schoonmaker does a brilliant job with the editing in adding some stylistic flairs to the cutting with rhythmic cuts to play up the energy as well as maintaining a leisured pace for the film. Schoonmaker also plays into the world of magic for utilizing the old films to help create wonderful montages of its history including a gorgeous montage that includes clips of the surviving work of George Melies.

Production designer Dante Ferretti and set decorator Francesca Lo Schiavo do a spectacular job with the set pieces created such as the some of scenes in the train station along with a few exteriors for places in London as 1930s Paris. One of the key highlights in the art direction is the set pieces created for Melies film as it is shown in great detail for what they looked like and how they were made. Costume designer Sandy Powell does an excellent job with the costumes from the uniform that the station manager wears to the simple yet casual 1930s clothes that a lot of the cast wears including the stylish costumes made for the Melies scenes.

Visual effects supervisors Ben Grossman and Robert Legato do an amazing job with the visual effects for some of wide exteriors of 1930s Paris along with some old-school effects to recreate the special effects of Melies‘ films. Sound editor Phillip Stockton does a fantastic job with the sound from the chaos of the station to the way a film is played on a projector to emphasize its magic.

The film’s score by Howard Shore is wonderful with its lush, orchestral pieces to play up some of the adventurous moments of the film as well as creating some low-key work in the dramatic moments as it‘s a very lively and exciting score. Music supervisors Karen Elliot and Randall Poster do a terrific job with the soundtrack as it includes soothing Parisian accordion music to 1930s jazz as well as an original song performed by Zaz that plays up to period.

The casting by Ellen Lewis is phenomenal as the ensemble that is created truly plays up to that world that is created for the film. In small appearances, there’s memorable performances from Jude Law as Hugo’s father, Ray Winstone as Hugo’s alcoholic uncle, Shaun Aylward as a street kid caught by the inspector, director Martin Scorsese as a photographer, and Emil Lager as legendary jazz guitarist Django Reinhardt. In other small but memorable supporting roles, there’s Emily Mortimer as a very kind flower girl as well as Christopher Lee as an informative yet generous bookshop owner. Frances de La Tour and Richard Griffiths are wonderfully funny in their respective roles as a café owner and a newspaper seller who are both in love despite the café owner’s Dachshund.

Michael Stuhlbarg is excellent as film historian Rene Tabard who helps Hugo and Isabel uncover information about Melies. Helena McCrory is radiant as Isabel’s godmother Jeanne who tries to protect her husband while eventually revealing her own secret as she becomes much warmer as the film progresses. Ben Kingsley is great as George, a bitter toy shop owner who is very suspicious about Hugo while becoming more guarded as the film progresses. Sacha Baron Cohen is very funny as the station inspector who tries to capture Hugo and woo the flower girl as Cohen also displays his gift for physical comedy and awkwardness into a very charming performance.

Finally, there’s the duo of Chloe Grace Moretz and Asa Butterfield in their respective roles as Isabel and Hugo. Moretz brings a wonderful enthusiasm and energy to Isabel in the way she get things going. Butterfield is superb for the exemplifying the anguish and longing of a boy trying to finish something and uncover a secret. Moretz and Butterfield also have a chemistry that intoxicating in the way they work and interact together as they are the heart and soul of the film.

Hugo is an outstanding and delightful film from Martin Scorsese. Armed with a great ensemble cast of veterans and young actors along with great technical work by its crew. It’s a film that is truly ambitious in its size while displaying lots of heart in telling a story a boy that would help resurrect the life of a filmmaker. While the film may be a departure of sorts for Scorsese but his passion for film and his mastery at cinematic wizardry makes this film a joy to watch from start to finish. Even as it has enough power and love that would rank with some of his great films of the past. In the end, Hugo is a magnificent and imaginative film from Martin Scorsese.

This is the first Scorsese film I've been excited about in a long while. Looks like it doesn't disappoint.

@Bonjour-I was extremely surprised by this film because I didn't expect it to be something much more than this. I would totally go for another family feature film by Martin Scorsese. He seems to have fun doing it.