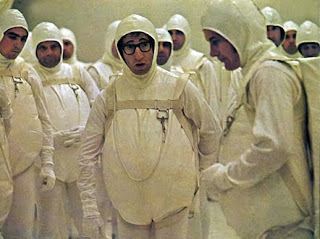 In Do Aphrodisiacs Work?, a court jester (Woody Allen) tries to seduce the Queen (Lynn Redgrave) in medieval times as a sorcerer (Geoffrey Holder) gives him a potion to win over the Queen. What is Sodomy? is about a doctor (Gene Wilder) who meets an Armenian man (Titos Vandis) who claims to have fallen in love with a sheep. When the doctor meets the sheep, he falls in love with her. In Why Do Some Women Have Trouble Reaching an Orgasm?, Fabrizio (Woody Allen) tries to figure out how to give his wife Gina (Louise Lasser) as he makes a startling discovery. Are Transvestites Homosexuals? has a middle-aged man (Lou Jacobi) dress up in women’s clothing during a dinner with family.

What Are Sex Perverts? is a game show where Jack Barry asks fellow contestants (Regis Philbin, Robert Q. Lewis, Pamela Mason, and Toni Holt) what perversion does this person have. In Are the Findings of Doctors and Clinics Who Do Sexual Research and Experiments Accurate?, a researcher (Woody Allen) and a journalist (Heather McRae) meet with the controversial Dr. Bernardo (John Carradine) whose experiments has run amok leading to a large breast terrorizing a small town. In What Happens During Ejaculation?, a man is on a date with woman as a brain operator (Tony Randall) leads a control center filled with various men as they get ready to have sex while a sperm (Woody Allen) starts to worry.

The film is essentially a collection of shorts where Woody Allen answers these questions about sex. Through these seven shorts that Allen creates, he gives each one a different style and presentation to answer these questions in his own style. Do Aphrodisiacs Work? is a medieval times piece where a court jester tries to have sex with the queen with references from Hamlet while What is Sodomy? is a straightforward drama about bestiality where a doctor falls in love with a sheep. Why Do Some Women Have Trouble Reaching an Orgasm has Allen paying tribute to Federico Fellini as he sports sunglasses like Marcello Mastroianni while the dialogue is spoken entirely in Italian as it has this style that is based on Fellini’s films. Are Transvestites Homosexuals? is a straightforward comedy about a guy that just wants to wear women’s clothing where the real answer is that it all depends on the man.

What Are Sex Peverts? has Allen presenting that segment as an old-school 1960s TV game show program with all of these perversions presented in a very silly form. Are the Findings of Doctors and Clinics Who Do Sexual Research and Experiments Accurate? is essentially a version of Frankenstein with someone as a version of Igor (Ref Sanchez) which reveals a doctor’s insane ideas about sex as a giant tit runs amok forcing a researcher to try and stop the tit. Then it all closes with this hilarious idea of what happens during sex as it’s all controlled by a guy in a NASA-like control center with a switchboard guy (Burt Reynolds) as they all go on a mission for the sex to be successful. The way Allen presents these stories into different genres and in different frames allows him to stretch his creativity as he creates a very funny and intelligent film about sex.

Cinematographer David M. Walsh does an excellent job with the photography that is very colorful for a lot of the sequences while giving the Aphrodisiacs segment a lush look while the Perversion sketch a very grainy black-and-white look. Editor Eric Albertson does a superb job with the editing as it’s presented in a straightforward manner while playing to certain rhythms for certain sketches such as the Orgasm and Ejaculation segments.

Production designer Dale Hennesy and set decorator Marvin March do a great job with the set pieces created such as giant boob in the Research segment along with the control room in the Ejaculation segment. Sound editor John Strauss does a nice job with the sound work to capture the chaos of the control room in the Ejaculation segment while the rest of the film is pretty straightforward. The film’s score by Mundell Lowe is wonderful as it plays to different music styles from medieval folk music for the Aphrodisiacs to more ragtime jazz music throughout as the film opens and closes with Cole Porter’s Let’s Misbehave.

The casting by Marvin Paige is wonderful as it features appearances from Robert Q. Lewis, Pamela Mason, Toni Holt, and a young Regis Philbin as contestants in the Perversion sketch with Jack Barry playing himself and Erin Fleming as the girl in the Ejaculation segment. Other notable small roles include Anthony Quayle as a king and Geoffrey Holder as a sorcerer in the Aphrodisiacs scene along with Titos Vandis as the Armenian man and Elaine Giftos as the doctor’s wife in the Sodomy segment. From the Ejaculation segment, there’s funny appearances from Tony Randall as the control room operator along with Burt Reynolds as the switchboard guy while John Carradine is very funny as Dr. Bernardo in the Research segment along with Ref Sanchez as Igor.

Heather MacRae is very good as the journalist in the Research segment who falls for the young researcher while Lynn Redgrave is very funny as the Queen who takes the aphrodisiac with a big surprise of her own in the Aphrodisiac segment. Allen regular Louise Lasser is excellent as the very sexy Gina in the Orgasm segment while Lou Jacobi is really a joy to watch as the man dressing up in women’s clothing in the Transsexual segment. Gene Wilder is great in a hilarious performance as the doctor who falls for a sheep in the Sodomy segment. Finally, there’s Woody Allen who is amazing in his varied roles for the films as he plays up his own nebbish persona in the segments he appears such as the cool Fabrizio in the Orgasm section while being a sperm in the Ejaculation scene.