Originally Written and Posted at Epinions.com on 8/17/08 w/ Additional Edits. 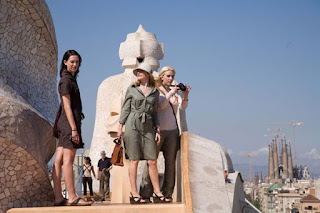 Written and directed by Woody Allen, Vicky Cristina Barcelona tells the story of two women named Vicky and Cristina as they take a vacation in Barcelona before Vicky is to be married. The two women meet an artist named Juan Antonio as Cristina embarks an affair with him while Vicky also falls for him. Yet, the affair becomes troubling when Juan Antonio's volatile ex-wife Maria Elena shows up as everything becomes complicated. The film is Allen paying tribute to Spain and all of its beauty. Starring Scarlett Johansson, Javier Bardem, Penelope Cruz, Rebecca Hall, Kevin Dunn, Chris Messina, and Patricia Clarkson. Vicky Cristina Barcelona is a witty, sexy, sensational comedy-drama from Woody Allen and company.

Vicky (Rebecca Hall) and Cristina (Scarlett Johansson) are on a summer vacation in Barcelona as Vicky is set to be married to a man named Doug (Chris Messina) while finishing her thesis on Catalonia culture. Cristina meanwhile, is interested in having a good time as the two girls live with friends of Vicky's parents in Judy (Patricia Clarkson) and her husband Mark (Kevin Dunn). The two young women explore the city of Barcelona where during an art gallery, they meet Juan Antonio (Javier Bardem) as they meet him again at a restaurant where he invites them to a small town called Oviedo for a good time. The free-spirited Cristina is excited though the more conservative Vicky is unsure as she reluctantly joins along to keep Cristina company.

The trio have a good time in Oviedo as during a night of drinking, Juan Antonio wants to sleep with them as Vicky refuses but Cristina wants to be seduced by the artist. Instead, Cristina gets sick as Vicky goes sightseeing with Juan Antonio as an attraction starts leading to the two making love. Vicky chose to keep the affair quiet on their return to Barcelona where Doug makes an announcement that he wants to marry Vicky in Barcelona. Doug arrives to Barcelona from New York as he and Vicky get married while Juan Antonio begins an affair with Cristina. Just as Juan Antonio's affair with Cristina blossoms, he gets news that his volatile ex-wife Maria Elena (Penelope Cruz) has attempted suicide as he brought her to his home so she can recover for a few months.

Cristina learns of Maria Elena's volatile behavior that's often melodramatic as Juan Antonio's ex-wife is skeptical about Cristina's intentions for Juan Antonio. While Juan Antonio admits to still be in love with Maria Elena, he also loves Cristina as the trio try to make a threesome where Maria Elena helps Cristina's artistic pursuits in photography. The affair begins to go well while Vicky's marriage life isn't what Vicky had expected to be. Even as she learns that Judy is unhappy in her own marriage to Mark. With the summer coming to an end, Cristina ponders her own role in the affair as well as her own identity while Vicky ponders her own feelings for Juan Antonio. Yet, the old tension between Maria Elena and Juan Antonio starts to rise again with the summer ending.

Changing locations from London to Barcelona, Woody Allen explores the world of sex and Spanish culture in this story of a bizarre yet passionate love affair revolving around two American women and a Spanish couple. What the film is really about is love and all of its anxieties. Vicky is a traditionalist who is not about risk until an affair with Juan Antonio makes her question about her feelings for Juan Antonio and her marriage to Doug. Cristina is a free-spirit who often goes from one phase to another as her threesome with Juan Antonio and Maria Elena makes her question whether she does have limits. Then there's Juan Antonio and Maria Elena, two passionate artists and lovers who are meant and not meant for each other as Juan Antonio is charming and lively while Maria Elena is more chaotic and skeptical.

While Allen creates great situations and characters for the story, he also uses a voice-over narration device by Christopher Evan Welch that does advance the plot but at times, it is very nagging and distracting. It's the one part of the film that works and doesn't work though a better approach for Allen is if he used the narration in Spanish. Allen's direction is very potent with great shots and locations for Barcelona in all of its glory. Notably the structures and artwork of Gaudi as Allen takes a tourist approach of sorts into exploring Barcelona.

A lot of Allen's camera work with close-ups, hand-held shots, and lots of unique compositions is wonderful as despite a few things that don't work. There's also shots and scenes where Allen once again pays tributes to one of his favorite directors. This time, it's Francois Truffaut and his classic 1961 film Jules & Jim in relation to the love-triangle of Cristina, Juan Antonio, and Maria Elena. The result of what Woody Allen does is prove that despite some of his recent misses, he’s still got some magic left in him.

Cinematographer Javier Aguirresarobe does an excellent job with the film's cinematography with colorful shots of the Spanish countryside with wonderful exterior shots of Barcelona. The interior shots are wonderfully lit to convey the Spanish look as Aguirresarobe's work is truly wonderful. Longtime editor Alisa Lepselter does excellent work in the editing that is very stylized with jump-cuts and freeze frames to convey Cristina's picture taking, notably of the Maria Elena character. Production designer Alain Bainee and art director Inigo Navarro do great work in the posh look of Judy's home while the more homely, artsy look of Juan Antonio's home is great with paintings and such.

Costume designer Sonia Grande does an excellent job in the costumes to help convey the city's colorful look with slender, contemporary clothing to match with the city's vibrancy. Sound editor Robert Hein does fine work in the sound in capturing the atmosphere of the town and one notable scene that’s very dramatic involving Maria Elena. The music is mostly driven by Spanish guitar ballads and a song about Barcelona for the opening and closing credits.

The casting by Patricia Kerrigan DiCerto and Juliet Taylor is superb for the most part with small yet memorable performances from the likes of Zak Orth and Carrie Preston as friends of Doug, Pablo Schreiber as a classmate of Vicky, and Josep Maria Domenech as Juan Antonio's father, who has some memorable one-liners. Chris Messina is good and funny as Vicky's dull yet snotty husband Doug while noted character actor Kevin Dunn is also good as Judy's husband Mark. Patricia Clarkson is excellent in her small yet memorable role as Judy, a woman dealing with the state of her marriage as she watch Vicky being unhappy in her marriage. Clarkson's performance is one that should be noted as the veteran actress once again stands out among her cast, not matter how small the role is.

Though the character of Cristina is an interesting one, Scarlett Johansson's performance doesn't exactly deliver. While Johansson's sexiness is key to the character, it's one audiences have seen before and the results is very bland. While blame can go to Allen for not really doing anything new with her, Johansson takes most of the fault for the fact that she plays the character one note where she is often being out-acted by her fellow actors. Johansson's co-star from The Prestige in Rebecca Hall is remarkable as Vicky. The British actress is playing the Woody Allen character as a neurotic traditionalist who finds herself falling in love with Juan Antonio as she ponders about the risks she takes. Yet, there's a sadness to Hall's performance as she plays a woman confused about her role and yearning for happiness.

Javier Bardem is great as the seductive charmer Juan Antonio as Bardem's subtle yet mesmerizing performance is one of his finest roles. A complete opposite to his chilling performance as Anton Chigurh in No Country for Old Men, Bardem plays a lively romantic who wants to give Vicky and Cristina a good time while dealing with his volatile ex-wife Maria Elena. The film's best and certainly the most unforgettable performance is Penelope Cruz as Maria Elena. Cruz's performance can be described as a firecracker where audiences don’t know what Cruz will do as she delves into melodrama while often having mean looks towards Johansson. Cruz's presence is also great where the camera obviously loves her while her scenes with Bardem are brilliant as the two have amazing chemistry. Though it's no surprise that they've worked together in a couple of films while are rumored to be dating at the moment.

While it doesn't match the heights of recent films like Melinda & Melinda and Match Point, Vicky Cristina Barcelona is still a witty, entertaining film from Woody Allen. With superb work from Javier Bardem, Penelope Cruz, Rebecca Hall, and Patricia Clarkson along with the beautiful location of Barcelona. While fans, old and new, might enjoy Allen's witty tale of love and all of its anxieties, the film does prove that Woody Allen still has some interesting stories left to tell. At the same time, it should be best that Woody Allen and Scarlett Johansson should part ways for good since it's doing neither for them. In the end, for a film with beautiful locations and stellar performances from some of the film's cast. Vicky Cristina Barcelona is a film worth seeking proving that Woody Allen still has it.