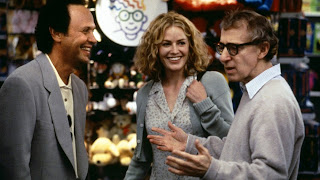 Written, directed, and starring Woody Allen as Harry Block, the film is about a writer whose self-absorbed working lifestyle and attitude practically alienates everyone around him. Now dealing with writer's block, he's also dealing with the mess of his relationships while trying to make amends with an ex-girlfriend who is going to get married. Then when he's about to be honored by a school, who threw him out in his freshman year, for his writing, all hell breaks loose in his intentions as the stories he based on his life comes back to haunt him. With an ensemble cast that includes Allen regulars Julie Kavner, Judy Davis, Caroline Aaron, Julia-Louis Dreyfus, and Mariel Hemingway plus Billy Crystal, Robin Williams, Kirstie Alley, Bob Balaban, Amy Irving, Eric Bogosian, Elisabeth Shue, Tobey McGuire, Demi Moore, Stanley Tucci, Richard Benjamin, Eric Lloyd, Paul Giamatti, Jennifer Garner, and Hazelle Goodman. Deconstructing Harry is a fun but abrasive film from the often charming and funny Woody Allen.

Harry Block is writing various stories that was inspired by his own affair with a former in-law in Lucy (Judy Davis) about a man named Ken (Richard Benjamin) who has sex with his sister-in-law Leslie (Julia-Louis Dreyfus) at a barbeque. Harry tells the angry Lucy another story about a young named Harvey (Tobey McGuire) who pretends to be someone else where he meets the Grim Reaper. Yet it's among the many small stories Harry comes up with that includes a literally out-of-focused actor (Robin Williams) and one about a couple (Stanley Tucci and Demi Moore) that is based on his second marriage to psychiatrist Joan (Kirstie Alley). Still, he tells his current shrink (Robert Harper) about his writer's block as he learns he's to be honored by Adair University that kicked out him out during his freshman year.

Harry wants to take his son Hilly (Eric Lloyd) despite Joan's refusal while learns that his most recent girlfriend Fay (Elisabeth Shue) is getting married to his friend Larry (Billy Crystal). After calling for the services of a hooker named Cookie (Hazelle Goodman), he asks her to join him for the awards ceremony as he also takes his fearful friend Richard (Bob Balaban) and Hilly for a road trip to Adair University. During the trip, Harry's fictional life starts to emerge to him as he stops to visit his half-sister Doris (Caroline Aaron) and her husband/rabbi Burt (Eric Bogosian) where the visit doesn't go well due to a story inspired by Harry's contempt towards their late father (Gene Saks). Harry's fictional world and characters start to appear to him where he's forced to see some of the things he's done to people.

Arriving to Adair, Harry's fictional world and real-life starts to collide as he meets a literature professor (Philip Boso) as Harry tells a story about a meeting with the Devil that is in the form of Larry who forces Harry to face his sins.

Inspired by one of Allen's favorite filmmakers Ingmar Bergman and his 1957 film Wild Strawberries, Allen goes for a world where reality and fiction really do blur. Since Allen is known more for his writing, he reveals the troubles that a writer goes through whenever being dealt with writer's block and where fiction comes from. This results where many of the fictional characters in Harry's life are based purely from real people where those people know what characters they are. Their reaction is expected since everything that Harry does is upsetting and he degrades pretty much every female counterpart he's been with to create all of these characters. The film's ending sums up what the film is really all about. A man who couldn't adjust reality where to the point that he creates a fictional world where he ends up hurting the people around him.

Truly this is one of Woody Allen's most bizarre and edgy scripts but it's also one of darkest. There's a cynicism throughout the film while Allen also brings out some of the most abrasive and incendiary dialogue of his career. The use of graphic language isn't just shocking (to the world of Allen) but in his intent where you begin to wonder what inspired Allen to come up with this dialogue. Did he go out and stumble upon a few gangsta-rap albums or listen to Nine Inch Nails' Broken EP? Still, the dialogue brings out a comic edge to Allen where he goes out and plays his usual, neurotic character but this time around, Allen makes sure that Harry is a guy that is truly unlikeable despite his attempt to become sympathetic.

If Allen's script is sharp in its uncompromising behavior, his directing reveals that bitterness in a strange, bizarre style. The story about Mel, the out-of-focus actor shows that everything is clear except Mel, who looks like a total blur. There's moments where the entire film deconstructs itself into revealing Harry's psyche. The script helps visualize Allen's distorted view of fact and fiction into a directing style that is truly arty where jump-cuts are used and his visual style recalls those he's been influenced by. It's truly a dark comedy that despite its intent and protagonist, is really funny. Helping Allen in his visual is the late Italian cinematographer Carlo di Palma in his final film collaboration with Allen who brings a wonderful look of New York City and the upper stare country area that recalls Bergman. Longtime editor Susan E. Morse also plays up to Allen's deconstructed style where the jump-cuts shows Harry's stumbling, neurotic world of reality.

Also helping out in Allen's visual department is production designer Santo Loquansto who not only does great work into visualizing the world of New York but the scene where Harry is in Hell is truly amazing. Using nothing but red, orange, and whatever you can think of is truly a great idea of what Hell could be from Harry's viewpoint. With the use of swing music in the background, it's really a nightmare of a man's temptations for women and pills coming true. The film's soundtrack is also great for its use of jazz and swing that plays to the film's very upbeat tone in its presentation while helping the film move along very easily.

The film's cast is probably the biggest ensemble that Allen has put out. With small yet wonderful appearances from the likes of Robert Harper, Philip Bosco, Stephanie Roth, Mariel Hemingway, Amy Irving, Julie Kavner, The Sopranos' Tony Sirico as a cop, Irving Metzman as Harvey's shoe salesman boss, Howard Spiegel as Joan's patient, Paul Giamatti, and Jennifer Garner in her film debut as Harry's fictional version of Fay. Hy Anzell and Shifra Lerer are funny as Harry's fictionalized version of his parents while Gene Saks is funny as Harry's father. Eric Lloyd is excellent as Harry's son Hilly who often questions about Harry's view into the world while Robin Williams is even funnier as Mel, the blurred actor. Caroline Aaron is also good as Harry's sympathetic but religious sister who questions Harry's approval while Eric Bogosian is excellent as Harry's moralistic brother-in-law. The worst performance of the entire movie is Kirstie Alley as Joan where Alley overacts in a scene when she confronts Harry about the affair with her shrill voice and anger that doesn't work. Alley can be funny but as a dramatic actress, she is horrible.

Faring way better as Alley's fictional counterpart is Demi Moore who brings a calm and funny performance as Helen while Stanley Tucci is also good as Harry's fictional counterpart Paul in that segment. Judy Davis is wonderful as Harry's hysterical and troubling sister-in-law who wants to kill him after the break-up of their tryst and his awful ways. Richard Benjamin is funny as Ken with his affairs and a scene where he reveals Harry about Lucy's anger while Julia-Louis Dreyfus is good as Davis's fictional counterpart. Tobey McGuire is also funny and good has the young Harry, Harvey who is just an awful kid who cares nothing but wanting to sleep with the next girl he can come across from. Bob Balaban is wonderful as Richard who seems to be the only friend that Harry has as he does a great job in his fear of having another heart attack while giving Harry some moral insight near the end. Elisabeth Shue is lovely as the loyal Fay who loves Harry but is aware of his life as a writer while she displays the rare warmth of the rest of female characters.

Billy Crystal is excellent as Harry's friend Larry who also plays the part of the Devil in a hilarious scene about the two dealing with their own sins. Hazelle Goodman is the film's best supporting performance as the hooker Cookie who doesn't care for Harry's flaws while she does everything he can to get him to be relaxed. Woody Allen is the film's best performance obviously because he's in his own movie. Allen displays all of his usual, neurotic, insecure artistic world as a character that often works. Here, Allen displays himself in his most abrasive performance yet as a guy who is a schmuck. He doesn't think of the damage he does to people and all he cares about is his work, pills, and wanting to fuck the next piece of ass he sees. It's a great performance from Allen who plays one of his most unlikeable characters while making him a funny protagonist.

Deconstructing Harry is a strange yet entertaining comedy from Woody Allen that features an amazing ensemble cast. While it's one of Allen's better films of the 1990s as well as his most abrasive in terms of dialogue. It's also a great re-telling of Ingmar Bergman's Wild Strawberries where Allen gets a chance to pay tribute to one of his heroes. While it's a film that might take some Allen fans aback due to its content, there is still proof that Allen is able to take risks as a writer and filmmaker. In the end, Deconstructing Harry is a marvelous yet wild film from Woody Allen.