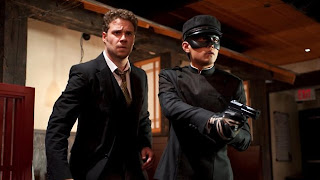 Based on the radio series and 1960s cult TV show by George W. Trendle and Fran Striker, The Green Hornet is about a publishing heir who teams up with his father’s longtime mechanic named Kato to fight crime while dealing with a mob boss going through some personal issues of his own. Directed by Michel Gondry and written by Seth Rogen and Evan Goldberg, the film is a modern take on the origin story of the Green Hornet and his friendship with Kato; that was played famously by Bruce Lee on the TV show. Starring Seth Rogen, Jay Chou, Cameron Diaz, Tom Wilkinson, Edward James Olmos, David Harbour, and Christoph Waltz. The Green Hornet is an entertaining action-comedy from Michel Gondry.

After the death of his publishing magnet father James Reid (Tom Wilkinson), Britt Reid (Seth Rogen) ponders what to do as he’s given control to run his father’s newspaper in Los Angeles. When he decides to rehire Kato (Jay Chou) based on the coffee he made, the two talk about Britt’s dad as Kato reveals the things he’s done for Britt’s dad such as fix up his cars. Britt learns that Kato’s work is far more extensive than the typical mechanic work as the two decide to vandalize the statue of Britt’s dad where they encounter a crime scene as the two fight off criminals. This gives Britt an idea to go vigilante as he and Kato form their own vigilante team with Britt calling himself the Green Hornet.

Following a spat with Kato, Britt meets up with one of his father’s longtime colleagues in district attorney Frank Scanlon (David Harbour) where Britt learns that his father’s death may have not been some accident. With help from Lenore based on her crime expertise, Britt realizes that there is a conspiracy going on that involves Chudnofsky as he realizes what to do but couldn’t do it alone.

While the film is essentially an origins story set in modern times about the Green Hornet and his partnership with Kato. Screenwriters Seth Rogen and Evan Goldberg do try to infuse their own brand of silly humor to the origins story as they make the Britt Reid character someone who feels insecure about never being able to make his dad proud while finding some kind of brotherhood in Kato. Then there’s Chudnofsky as he’s a criminal who starts to go through issues due to the arrival of younger criminals as he thinks he’s becoming a dinosaur. While Rogen and Goldberg are able to make Reid, Kato, Chudnofsky, and Lenore very interesting characters, the only flaw in the script is that it does follow the formula of a typical origin story that involves hero partnerships. Still, Rogen and Goldberg are able to do more with the formula by bending genres and create engaging characters.

Michel Gondry’s direction is wonderful though it lacks a lot of the stylistic flair that he’s been known for with a lot of his film. While he does do a few ideas such as multiple split-screens, speedy montages, and other abstract shots that is typical of his work. There’s not enough of that as Gondry’s direction is more standard with action-comedies in terms of fast-paced action sequences and light-hearted scenes of humor. Yet, Gondry does make sure the film is entertaining and funny as he was at least able to create a solid film that does what is expected with the genre.

Cinematographer John Schwartzman does a nice job with the cinematography with some stylish shots to complement the comic-book like look of the film or some of the day and nighttime exterior shots while utilizing some wonderful shading for some of the interior scenes. Editor Michael Tronick does a very good job with the editing as he creates some wonderful, fast-paced rhythms for the action scenes along with stylish cuts like the multiple split-screen sequence.

Production designer Owen Paterson and set decorator Ronald R. Reiss do a wonderful job with the set pieces such as the Reid estate garage as well as the Reid mansion along with the building that Britt‘s father runs. Costume designer Kym Barrett does an excellent job with the costumes from the old-school suits that Chudnofsky wears to the costumes that Britt and Kato wear. Visual effects supervisors James Dixon and Justin Jones do some fantastic work with the visual effects such as the stuff involving the Black Beauty cars and various action sequences in the film. Sound mixers Nerses Gezalyan and John Pritchett do some terrific work with the sound to play up the action in all of its chaos.

The film’s score by James Newton Howard is stellar for what is expected with action-comedies in terms of bombastic orchestral scores that flows and such though it’s nothing that is really outstanding. The film’s soundtrack features an array of music ranging into various genres as it features cuts by Anvil, the White Stripes, Digital Underground, Coolio, Johnny Cash, the Rolling Stones, Ludwig Van Beethoven, Van Halen, the Greenhornes, and Jay Chou bringing his own Asian-pop into the mix.

The casting by Francine Maisler is brilliant as it features an ensemble cast that includes appearances from Edward Furlong as meth chemist, Jamie Harris and Chad Coleman as a couple of Chudnofsky’s henchmen, Analeigh Tipton as a date of Britt early in the film, and James Franco in a cameo as a young gangster Chudnofsky very early in the film. Edward James Olmos is very good as a longtime editor friend of Britt’s dad who tries to warn Britt about covering the Green Hornet while David Harbour is also good as a district attorney who tries to get Britt involved into schemes for his own political gain. Tom Wilkinson is pretty decent in a very small role as Britt’s dad as it’s really more of a cameo that doesn’t give him much to do. Cameron Diaz is excellent as Lenore, a secretary whose criminology expertise unknowingly helps Britt and Kato in how to create their own schemes while proving to be very smart as it’s a wonderful role for Diaz to be the straight woman.

Christoph Waltz is wonderful as the villain Chudnofsky as Waltz brings a very slimy quality to a criminal that essentially goes into a mid-life crisis while trying to find a way to make himself intimidating. Jay Chou is superb as Kato as Chou brings a real charm to his character though his English at times is a bit hard to understand. Yet, Chou was able to make his character a joy to watch as it’s a great tribute to the late Bruce Lee. Finally, there’s Seth Rogen who brings in his usual comic persona to the character as it’s pretty good performance that allows him to be brash and funny though it doesn’t entirely work at times. Still, he and Chou are able to make a good combo as they’re able to keep things exciting and funny.

The Green Hornet is a pretty good film from Michel Gondry thanks in part to a wonderful ensemble cast and its willingness to be entertaining. In comparison to a lot of other films based on comics or other superhero-driven material, it’s kind of weak since there isn’t a lot that really gives the film a chance to stand out. In terms of the other films that Gondry has done, it’s his weakest work to date despite the fact that he’s able to inject a few of his visual tricks into the film. In the end, The Green Hornet is a fun film that does what is expected for its genre.

Michel Gondry Films: Human Nature - Eternal Sunshine of the Spotless Mind - Dave Chapelle’s Block Party - The Science of Sleep - Be Kind Rewind - Tokyo!-Interior Design - (The Thorn in the Heart) - The We & the I - Mood Indigo - (Is the Man Who is Tall Happy?) - (Microbe & Gasoline)

It was funny and entertaining but Rogen's character was so unlikable that I just couldn't really get behind him or root him on at all, which is something you need for a good superhero film. If only Nic Cage got to do the film and do his Jamaican accent. Good review Steve.

I liked it and I like Rogen as well although it's the usual schtick that he does.

I'm not sure about Nic Cage in a Jamaican accent. I don't want to see that.