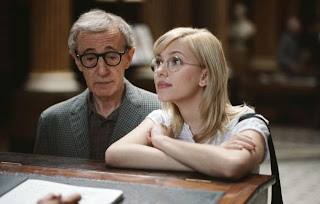 Written, directed, and starring Woody Allen, Scoop is about a young, American student trying to be a journalist gets a big scoop from a ghostly spirit who is trying to catch a tarot-card carrying serial killer. Helping the student is an American magician who suspects a rich heir as does the ghostly spirit while the young woman falls for the handsome suspect. Taking cues from his old films and love of mystery and comedy, Allen goes for laughs as the films reveal he's been re-inspired. Also starring Scarlett Johansson, Hugh Jackman, Ian McShane, Romola Garai, and Charles Dance. Scoop is an entertaining, witty mystery from Woody Allen.

Revered British journalist Joe Strombel (Ian McShane) has just died as he meets a woman named Jane Cook (Fenella Woolgar) on their way to the afterlife. When Cook revealed that she had been poisoned by her boss and rich heir Peter Lyman (Hugh Jackman), she believes that he's the Tarot Card killer who has been killing hookers in a similar style to Jack the Ripper. Strombel jumps off the boat to give someone the scoop as a young college student journalist named Sondra Pransky (Scarlett Johansson) is trying to catch a break. Going to a magic show with her friend Vivian to see Sidney Waterman aka Splendini (Woody Allen) perform magic tricks, Sondra is part of the act as she sees Strombel giving her the scoop of a lifetime.

When Sondra learns who Strombel was and finds information about the Tarot Card killer, she talks to Sidney about his magic box where they see Strombel's spirit who gives them more information. Sondra and Sidney decides to to investigate Lyman, who is the son of a well-respected lord (Julian Glover) as they managed to get into a posh gym through Vivian's connections where Sondra meets Peter Lyman as she calls herself Jade Spence with Sidney posing as her father. The two get invited to the Lyman estate as Sondra doesn't think that Lyman is the killer as she starts to fall for him. When Sidney holds another magic show, Strombel appears out of the box in front of an audience as he gives Sidney information about a vault in Lyman's home. Sidney goes to Lyman's home during the party as he goes into the vault and finds nothing much to Sondra's disappointment until she later finds a deck of tarot cards when she spends the night.

After turning to Vivian's father (Charles Dance), a newspaper editor, about what she believes, Sondra realizes that it might not be enough until the news that the real Tarot Card killer was caught. Sondra meets Peter again to confess who she really is as the two starts a relationship. Sidney however, doesn't think the case is over as he still suspects Peter Lyman as Strombel makes a last appearance where Sidney realizes who the Tarot Card killer is.

While the film doesn't rank up there with Allen's earlier, funnier films of the early 70s or some of his other comedies and the 80s and 1990s, Scoop does achieve in what Allen aimed for. A witty, clever mystery that features laughs and the kind of neurotic, insecure characters that Allen is known for. The screenplay is really Allen's most entertaining since Sweet & Lowdown where he finds the right timing for comedy while building the suspense of mystery where although it's kind of predictable. The adventure is still fun to watch where Allen's direction and locations of London really brings a new energy to his comedic style. Allen understands that mystery can be funny and he uses these flawed, characters who aren't smart or very driven but have something that audiences can relate to. Overall, the film features Allen in his finest.

Cinematographer Remi Adefarasin, who worked on Match Point, returns to bring in a more colorful, vibrant look of London in its exterior setting of the country side to the posh, interiors of some of the locations. Production designer Maria Djurkovic and art director Nick Palmer do excellent work into the look of posh London with its inspiring locations as well as costume designer Jill Taylor for the dresses that Scarlett Johansson wore. Editor Alisa Lepselter does some wonderful, tight editing to the film a nice, leisurely pace in its 96-minute running time. The film's soundtrack is filled with a lot of classical cuts that Allen has often compiled but most of its is done in a playful way along with elements of suspense as the music really adds a lot of wit and joy.

The film's cast is wonderfully assembled with notable small performances from Julian Glover, Kevin R. McNally, and Fenella Woolgar. Other minor performances from Charles Dance as Mr. Malcolm and Romola Garai as Vivian are excellent and memorable in their supporting roles. Ian McShane is very funny and intelligent as the wise, driven Joe Strombel. McShane, often known for playing dark, brooding characters, proves his range as a comedy actor where he plays his character very straight and intelligent as he steals every scene he's in. Hugh Jackman is wonderfully charming as the shady, charismatic Peter Lyman. The Australian-born actor proves he can do an authentic English accent while bringing a lot of wit and complexity to his character. Coming off films like the X-Men series and The Prestige, Jackman proves that he can do comedy and bring a lot of joy into a performance. Woody Allen is very funny in his usual, neurotic persona. While it's essentially Woody playing himself, Allen sticks with what works and it's consistently funny and witty as Allen brings a cleverness to his role while performing some magic tricks.

While not up to par with the sarcasm in Ghost World and the eerie minimalism of Lost in Translation, Scarlett Johansson gives an excellent performance as Sondra Pransky. A far superior performance than she gave in Match Point, in which it was uneven, Johansson brought more layers as she plays a nerdy, frumpy kind of woman who is driven but not very confident. When Johansson plays the sensual Jade Spence, it's all done in a comical way as Johansson plays a great straight-woman to Allen while having some wonderful chemistry with Jackman. It's clearly one of her better performances and far superior to the recent ones in The Black Dahlia and The Prestige also with Jackman.

While not as groundbreaking or one of his great films, Scoop is still a clever, witty mystery-comedy from Woody Allen. With a great cast led by Allen, Scarlett Johansson, Hugh Jackman, and Ian McShane, it's a film that is filled with some wonderful, funny moments while being entertaining at the same time. Though it's one of the better films he's made in the 2000s, Scoop is a good and enjoyable comedy from Woody Allen.