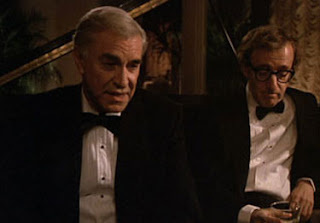 Written, directed, and starring Woody Allen, Crimes & Misdemeanors is two stories about two different men and their own conflict with their own moral values. One story involves a doctor whose affair with another woman gets out of control as he tries to end it with the help of his brother. The other story involves a neurotic filmmaker who tries to vie for the affection of a woman while making a documentary on his brother-in-law and his own film about a professor he idolizes. Combining elements of comedy and drama, Allen uses the genres to study the issue of morality that comes together in the end. Also starring Allen regulars like Mia Farrow, Alan Alda, Sam Waterston, and Anjelica Huston as well as Martin Landau, Claire Bloom, Joanna Gleason, Jerry Orbach, Caroline Aaron, and Martin Bregmann in a non-credited cameo role as Professor Louis Levy. Crimes & Misdemeanors is an enigmatic, intelligent, and funny film from Woody Allen.

Judah Rosenthal (Martin Landau) has just returned home from a ceremony where he's being honored for his charity work as he's joined by his wife Miriam (Claire Bloom), their daughter Sharon (Stephanie Roth) and her husband Chris (Greg Edelman). Then Judah receives a letter addressed to Miriam which is from his mistress Dolores (Anjelica Huston) who confesses about the affair. Haunted by his childhood that surrounded by religious morality, he turns to his rabbi Ben (Sam Waterson) whom he's treating for blindness. Judah also turns to his criminal brother Jack (Jerry Orbach) as Judah ponders what to do until Jack takes care of things. Judah is then forced into a spiritual crisis as he dreams of old life as he sees his father/rabbi Sol (David S. Howard) and his Aunt May (Anna Berger) where they talk about guilt and morals while his younger self (Garrett Simowitz) watches.

Meanwhile, a struggling documentary filmmaker named Cliff Stern (Woody Allen) is trying to finish a documentary on his favorite philosopher in Professor Louis Levy (Martin Bregmann). Though he gets joy in taking his niece Jenny (Jenny Nichols) to see old movies, Lester reluctantly takes a job from his successful TV producer brother-in-law Lester (Alan Alda) to film a documentary on him for PBS. Though he gets to meet and fall for its producer Halley Reed (Mia Farrow) who is interested in his Levy doc, the two begin an affair. Yet, Cliff also has to deal with his lonely sister Barbara (Caroline Aaron) and his own wife Wendy (Joanna Gleeson) as a night with her, Halley, and Lester becomes a disaster as Lester is attracted to Halley. When Cliff receives some awful news about his Levy documentary and Halley leaving for London, his project for Lester doesn't turn out well. Months later at a wedding for Ben's daughter, Judah and Cliff begin to have a discussion of everything they've been through.

If there is one singular theme that Woody Allen discusses in this film, it's the morality issue of what comes from an extramarital affair. While the issue is dealt with in two ways, they're both profound and very cerebral in the way Allen questions humanity and the sins that they had to deal with. While the segment involving Cliff's attempt to engage in an affair with Halley is more comical, it's done in a more naturally way through dialogue and behaviors. Especially in one hilarious scene where Barbara talks about a one-night stand that becomes a disaster that reveals a hilarious yet disgusting event in her affair. Still, that segment also reveals the reality that is discussed throughout the entire film whether it's in the issues of morality or in artistic values. In Cliff's case, despite the fact that his own little documentary on Levy is interesting, they don't exactly pay the bills where it's Lester's own views on comedy and his ideas do despite the fact that they suck.

The other segment involving Judah's affair with Dolores is a far more cerebral story of morality where here's this man who has everything including a loving family, money, a great career, and is respected by everyone. Yet, he does a deed that is so horrible in engaging an affair with this charming but emotionally unstable woman where he confides into trying to find answers that will end the situation. That brings a moment of two consciences in the rabbi-going-blind Ben and the organized crime works of Jack Rosenthal. What Judah chooses doesn't really make the problem go away but he questions his own actions where he has an imaginative moment where he sees an old family dinner where his father prefers to choose the words of God instead of the truth while his more cynical aunt believes that what goes around, comes around. There, Judah is forced to believe in that reality will play out his outcome or as his father puts it, "the eyes of God are always on us" where his afterlife will play things out.

Allen's script and observant direction really brings out a film that isn't just intelligent and witty but also questions the behaviors of humanity. Bringing both elements of comedy and drama with a bit of tragedy definitely gives the film a non-linear tone in some ways where the film moves back and forth into the Rosenthal and Stern segments while the Rosenthal sections features a lot of flashbacks of Judah's affair with Dolores. Including in one scene where Allen shoots Judah and Dolores' discussion of the affair in one entire take. The mix of comedy and drama might seem to be uneven at first but in the final scene in the wedding, it all comes together where the film has a disturbing yet somewhat cynical ending but it works in how humanity would behave to the point of morality. It's not just a Jewish issue of how murder and infidelity is dealt with but it's a universal issue of how humans will deal things whether they choose to let reality play things out or dealing with religion.

Helping Allen in the film's technical scales in terms of presentation is cinematographer Sven Nykvist, who is the cinematographer for some of Ingmar Bergman's films. Nykvist brings a colorful yet eerie feel to many of the film's dramatic sequences while the light sequences is more upbeat in many of the film's comedic sequences. The film's look of upper-class and middle class New York is captured wonderful by production designer Santo Loquasto and art director Speed Hopkins along with costume work of Jeffrey Kurland. Allen's longtime editor Susan E. Morse brings a tight style of cutting and pacing for the film while adding some great parallel scenes of Rosenthal's murder plot to some of the movies Stern is watching while giving the film a nice movement in Allen's structure. The film's soundtrack includes not just Allen's love for ragtime jazz music but also a bit of classical music that brings that tone of what Allen conveys for the film where one part of the film in the comedy with jazz is quintessential Allen but the other is Allen being a bit more cerebral.

The film's cast is amazing from the people who works with Allen to the people who are participating in a film by Allen. With small, nice performances from Greg Edelman, David S. Howard, Anna Berger, Garrett Simowitz, Stephanie Roth, Jenny Nichols, Frances Conroy as the new owner of his childhood owner, and Victor Argo as a detective who questions Rosenthal about Dolores' murder along with cameos by Darryl Hannah and writer/director Nora Ephron. Claire Bloom and Caroline Aaron have small roles but they're important to the issues that the male protagonists are dealing with. Martin Bregmann is excellent as the philosophical Professor Levy whose views on life are very universal on many sides which brings a lot of the film's morality issues until the action that troubles Clif's morality when the project falls apart. Joanna Gleason is pretty good as Stern's frustrated wife who seems to be more into her own brother than her husband as she brings the tension that would spark Cliff to break his own values. Alan Alda brings a funny, witty performance as a pompous but smart producer who knows that he might be a phony at times but his intelligence and ability to be successful brings a nice, antagonism to Stern's more artistic pursuits.

Playing the moral conscience of the films for Rosenthal are Sam Waterson and the late Jerry Orbach who both bring great performances. Waterson is amazing as the faith-driven Ben who raises a lot of moral questioning into Rosenthal's psyche while his growing blindness isn't just physical but in some ways, it also deals with the idea that Ben could become blind of what's really going on with the world. Jerry Orbach is also brilliant as the dark, cynical conscience who reveals his own power and connections into what he can do while reminding Rosenthal that it's reality that will become the outcome.

Mia Farrow is excellent in the role as Halley Reed who enjoys Stern's artistic pursuits only to realize that she's played as a trophy of sorts while dealing with her own divorce and realizing that not all of Stern's criticism on Lester are entirely true. The best female performance easily goes to Anjelica Huston as the hysterical, emotional Dolores who is desperate to continue her affair with Judah only to try and break his marriage with Miriam. It's an amazing performance from Huston who provides the spark for Judah's moral exploration. Woody Allen is funny in his most restrained performance to date as a struggling filmmaker who has the talent and passion but remains unsuccessful. In the role of Cliff Stern, Allen brings that anguish of an uncompromising artist who realizes that he is filled with jealousy while trying to win the heart of Halley Reed which doesn't work either. Allen gives a great performance as he has great chemistry with not just Farrow but Alan Alda as well.

The film's best performance easily goes to Martin Landau in the role as the guilt-ridden Judah Rosenthal. If there was any indication into the talents of Landau, this performance reveals all as he doesn't over-dramatize or underperforms his character. While Landau has some amazing chemistry with Claire Bloom, Anjelica Huston, Sam Waterson, and Jerry Orbach, he really carries the film where he brings the audience into an exploration of the moral values of humanity. He doesn't make himself entirely sympathetic in his own actions yet there's a period that we want to forgive him for what he does. It's a masterful performance from Martin Landau who often never gets the respect he deserves.

While Annie Hall and Hannah & Her Sisters are considered some of Allen's finest works, Crimes & Misdemeanors is definitely up there as one of his greatest films thanks to some smart directing, writing, and the performances of Allen, Anjelica Huston, Mia Farrow, Alan Alda, the late Jerry Orbach, Sam Waterston, and Martin Landau in a great performance. While it's funny and raises a lot of issues of morality, it's also a very entertaining film that reveals how humans can do bad things. In the end, Crimes & Misdemeanors is a smart yet engaging comedy-drama from Woody Allen.