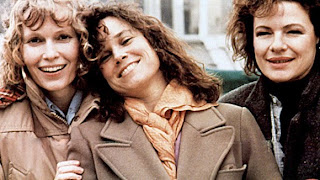 Written, directed, and starring Woody Allen, Hannah & Her Sisters deals with an actress/homemaker who deals with her own life and the relationship of her two sisters. Meanwhile, her husband is falling for one of her sisters while the other is trying to get a career going while dealing with her own sobriety from drugs. Another story involves a woman's ex-husband whose neurotic obsession with death leads him to question his own existential issues. With an all-star cast that includes Allen regulars like Mia Farrow, Dianne Wiest, Sam Waterston, Julie Kavner, Tony Roberts, Joanna Gleason, and Julia-Louis Dreyfus plus Michael Caine, Barbara Hershey, Lloyd Nolan, Maureen O’Sullivan, Max Von Sydow, John Turturro, Daniel Stern and Richard Jenkins. Hannah & Her Sisters is a funny, sweet comedy-drama from the always talented Woody Allen.

Hannah (Mia Farrow) is hosting another Thanksgiving dinner in New York City with family and friends while her husband Elliot (Michael Caine) is falling for Hannah's younger sister Lee (Barbara Hershey). Also attending is Hannah's other sister Holly (Dianne Wiest) who also brought her friend April (Carrie Fisher) where the two created appetizers for the dinner that is a hit. This gives Holly and April an idea to start a catering business though Hannah reluctantly gives Holly a loan due to her to inability to pay off loans based on Holly's past drug abuse. Lee returns home to her reclusive lover Frederick as his anti-social behavior has made him bitter as Lee ponders about Elliot's feelings towards her.

Meanwhile, Hannah's former husband Mickey (Woody Allen) is going through another of his hypochondriac behaviors following the departure of his TV show partner (Tony Roberts). Having to deal with various writers, his friend Gail (Julie Kavner) suggests having him visit a doctor about the deafness in his right ear while going to another as Mickey is convinced he's dying. Holly and April's friendship starts to fall apart due to April's sudden fascination with an architect named David (Sam Waterson) whom Holly likes as well. Lee's friendship with Elliot starts to get serious as the two begin an affair after Lee breaks up with Frederick. When Mickey learns that he's going to be fine, he suddenly endures a spiritual crisis that makes him leave his show as he tries to figure out what to do when he is to face death.

Following her falling out with April and many failures to get an acting career going, Holly decides to become a writer as the relationship with the three sisters start to become troubled. With Lee feeling guilty about her affair with Elliot and Holly questioning about Hannah's generosity, complications start to emerge when Holly's finished script leaves Hannah upset. Lee tries to figure out what to do with Elliot as well as her own individuality while Mickey goes into an existential crisis as all of the people in Hannah's life face their own dilemmas.

Inspired by the works of Chekhov, Allen definitely goes for a story where there's layers upon layers with multiple storylines that comes together on a few occasions. What is really amazing is that Allen brings enough stories and little subplots that it doesn't lose sight of its main theme. That main theme is family. While everyone has their dysfunctions and issues with each other, they still come together for one reason or another. While the role of Hannah might have been a breadwinner and is the most stable among her entire family, as the film develops. She still has problems that every other character has, even in a little subplot as she tries to settle issues with her bickering parents. It's Allen's script that is really full of surprises in not just its approach to comedy but drama as well.

While Allen's own segment as the hypochondriac trying to find answers about his own existence is the funniest bit of the film. It's the segment that balances everything else as it gives a break from the often dysfunctional storylines of the film involving Hannah, Lee, Elliot, and Holly. Yet, it's that segment that provides some of the film’s smartest moments about existential and spiritual issues. The storyline about Elliot's affair with Lee is wonderfully handled in the way it reveals this love triangle as Elliot is a bit bored with Hannah's stability while Lee has become frustrated with Frederick's anti-social, cynical view of the modern world. The development of that storyline leads to guilt where Hannah becomes a bigger player about her own role as a wife and sister. Then, there's Holly's storyline where she aims to try to be successful and find a man while she deals with her own insecurity often caused by Hannah's generosity and her own past as a drug addict.

This is one of the reason why Woody Allen is regarded as an amazing artist where its his writing that provides the crutch for all of these storylines to come together. When he's playing a director, he takes the structure of his script and breaks it down to moments where he's trying to have the audience be aware of what's going on. Using his beloved New York City as the backdrop, it couldn't be anymore perfect. There, Allen uses New York City to show the characters in their own unique personalities whether it's the punk club that Holly takes Mickey go to or the bookstore that Lee brings Elliot to. Its Allen in one of his most heartwarming and funny takes on humanity as it truly stands out as one of his best films.

Helping Allen in his vision is longtime cinematographer Carlo di Palma whose lighting in many of the film's interior scenes reveals the lovely feel and atmosphere that is New York City. The work of the late Italian cinematographer is gorgeous to see from the exterior locations he shoots to the diverse world that is New York City. Production designer Stuart Wurtzel and set decorator Carol Joffe also help capture the atmosphere and vibrancy of the city with their detailed look at the posh world of its people to the art world that Frederick lives. Longtime editor Susan E. Morse does great work with cutting many of the film's varied storylines into wonderful little segments and moments while cutting to black backgrounds to help structure Allen's script. Another part that makes Allen's films so interesting is the soundtrack that is filled with not just elements of musical cuts ranging from Bach and Mozart but jazz music featuring a performance of Bobby Short while Allen does something rare by putting a rock band in 39 Steps to convey their post-punk sound.

Finally, there's the film's large cast which include some small, early appearances from the likes of John Turturro, Julia-Louis Dreyfus, Joanna Gleason, and Richard Jenkins plus Tony Roberts in an un-credited cameo as Allen's ex-partner. Also making cameos are the scores of children that were adopted by Mia Farrow including Allen's future wife, Soon-Yi Previn. Daniel Stern makes a funny appearance as a kooky art collector while Julie Kavner does excellent work as Allen's producing partner.

Sam Waterson is wonderful as the architect, opera-loving David while Carrie Fisher is also great as Holly's flirtatious friend and business partner April. Max Von Sydow gives a fantastic performance as the anti-social Frederick whose ills against the modern world and its pop culture plays against him when Lee decides to break up with him. In his final film role, Lloyd Nolan is great as the frustrated, compulsive Evan while Mia Farrow's real-life mother Maureen O'Sullivan is also great in the role of Norma whose boozy, crazed personality brings a perfect tone as both characters stand out.

Barbara Hershey is amazing in the role of Lee, a young woman whose life with a reclusive, intelligent artist has trapped her emotionally as she finds comfort in Elliot. Hershey brings a lot of warmth and sympathy to a woman who later finds guilt and her own role in life as Hershey brings a true complexity to the character. Mia Farrow is also great as the eldest of the three sisters, Hannah. Farrow brings a lot of stability to her character until the third act when all of her generosity and supportive gestures backfires as she becomes a woman who is in need and trying to understand her role. It's one of Farrow's best performances while her co-star Dianne Wiest gives the film's best performance as Holly. Weist brings a lot of complexity as a woman whose cheerfulness exterior is balanced by her internal struggle to get by as an actress only to turn to writing. While her character has the most showy role of the female cast, she brings a lot of charm and excitement to the role as it stands as one of her best performances.

Michael Caine brings in one of his best performances as Elliot with his subtle, flirtatious behavior and charming personality. He carries his performance with ease and innocence as a man who is just smitten by his sister-in-law only to develop into a man driven by guilt and confusion. Caine brings all the right notes and reactions to his performance as he has great chemistry with Hershey and Farrow in their respective scenes. Woody Allen also gives a great performance as Mickey with his neurotic, funny take on a hypochondriac who goes a quest for spiritual and existential answers. Allen brings his comic timing and reaction to a role that only he can do best. It's truly one of Woody Allen's finest performances.

Released in early 1986, Hannah & Her Sisters was a hit as it was also hailed by fans and critics as another triumph from Woody Allen. The film went on to win three Oscars for Best Screenplay to Allen and Supporting Acting honors to Michael Caine and Dianne Wiest. While it maintains to be one of Allen's most successful features, it would only be topped three years later with 1989's Crimes & Misdemeanors. Still, Hannah & Her Sisters offers something for fans of Woody Allen while newcomers will find this to be enjoyable for its humor and realistic take on family. Thanks to a great cast and Allen's talents, Hannah & Her Sisters is a true, heartwarming film.

Hi how are you?

I was looking through your blog, and I found it interesting, and inspiring to me, so I thought why not post a comment.

I have a blog also obviously and would like to invite you to become my blog friend...

I mostly post about the South West experience through the perspective of personal writings, and my art.

Maybe you can become my friend, and follow, and I can also follow you, if that is okay.

Well I hope to hear from you soon… :)
Jesse

This remains as my favourite Woody film. It fits his usual bill of being outrageously funny while still being smart and excellently acted, but it's always the sensitivity (and even the occasional romanticism - like the end) which charms me the most making it come off as a supremely honest film.

@Jessie-I'm doing fine thank you. I'll check out your blog to see if it interests me.

@Andrew-This is my 2nd favorite Woody Allen film. There's a lot about that I love and it's also funny and dramatic. There's characters I can relate to.

My favorite Woody Allen movie and one of my top 20 of all time. I can literally watch this movie always.

@John Gilpatrick-It's my third favorite Woody Allen film and certainly always worth re-watching. It's funny but also kind of sad at times but there's so much in that film that just leaves you engrossed.