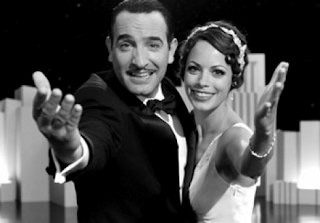 Glad you loved it Steven! I really loved this movie. It has so much going for it and manages to convey so much more about the characters and story than so many normal "talking" movies made today.

I knew Dujardin from the OSS movies so I was aware that it could easily charm his way through this movie but it was nice to see him work with the fall of his character and how his pride is getting in his way.

I had fun watching it. It's the kind of movie that really needs to be seen these days just as pure entertainment. Hazanavicius gets it right by just keeping it simple and knowing when to put the musical numbers in the film.

I think sometimes, we need to go back to basics and find a way to make it feel new all over again.

@Mr. Jeffrey-Indeed it is. More people should see and just have a good time.

Wonderful review! The movie is definetly my favorite of 2011 and one of the few pictures I rated above 9,7/10. It's such a magical, charming movie and it captures the atmosphere and the feel of the old films beautifully. Truly tiumphant work, from everyone involved.co

I'm already convinced that it's going to win Best Picture and some other categories although it's not my top 10 films of 2011 so far.