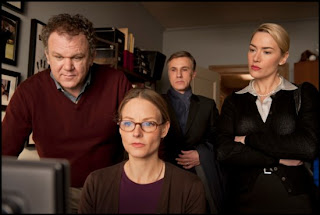 Based on the play God of Carnage by Yasmina Reza, Carnage is the story of a two parental groups discussing about an incident involving a fight between their two sons leading to an all-out chaotic war between the four people inside an apartment. Directed by Roman Polanski and adapted into script by Polanski and Reza, the film is an exploration adolescent fighting where four parents try to make a discussion where things go wrong. Starring Jodie Foster, John C. Reilly, Christoph Waltz, and Kate Winslet. Carnage is an insane yet thrilling comedy form Roman Polanski.

The film is this kid who hits another kid with a stick as trouble brews. Their respective parents try to sort it all out in a typical afternoon where things go from pleasant to devolve into full-on anarchy. That’s pretty much it for what the film is about in a 76-minute running time. Still, that doesn’t make it exciting as Yasmina Reza and Roman Polanski start the film out with the actual fight between the two boys in its opening credit scene and then cut to their parents all talking about what to do. Yet, there’s a lot that happens in the middle of this discussion as there’s a woman named Penelope (Jodie Foster) that wants to maintain some form of civility. Her husband Michael (John C. Reilly) wants to play it cool as he is later interrupted by phone calls from his mother. Nancy (Kate Winslet) wants the same thing as Penelope though her husband Alan (Christoph Waltz) is more interested in the business he conducts from his cell phone.

While Penelope and Michael serve as hosts to Nancy and Alan by giving them apple/pear cobbler, coffee, and later scotch. The conversation they have is all about the boys and wanting Nancy and Alan’s son to apologize for hitting Penelope and Michael’s son. Yet, it becomes more complicated as these four different people start to delve into their own theories about the way the world works and possibly consider that it’s Penelope and Michael’s son fault and vice versa. Eventually, discussions about sexism, violence, morality, suffering, and all sorts of subjects come into play where things like vomit, destruction, and all sorts of childish behavior occurs. The screenplay that Reza and Polanski create is very engaging into these themes as it ups the ante once the story progresses and the characters become not just despicable but also enjoyable in a very strange way.

Polanski’s direction is truly exhilarating in the way he can take this premise about four people in an apartment to discuss something be very exciting. Notably as he maintains an air of theatricality where all of the actors are in a frame discussing what they want to talk about. At one point, three could be talking while one is still somewhere doing something else. There is an energy to the way Polanski captures the conversation through the dialogue that plays into different rhythms as his compositions and framing are very vibrant in its very straightforward approach. There is also humor that is prevalent in the film where the actors definitely loosen up and go all out as it ranges from bawdy to juvenile. The overall work that Polanski does is sensational as he crafts what is truly a very fun yet crazy comedy that doesn’t get very dull.

Cinematographer Pawel Edelman does an excellent job with the cinematography to set the mood of the interior settings as the film gets darker and crazier in its approach to lighting. Editor Herve de Luze does a superb job with the editing as it maintains a very brisk pace and rhythmic cuts to play up the intensity of the dialogue and the action that occurs from the characters. Production designer Dean Tavoularis and set decorator Franckie Diago do nice work in the look of the apartment and its hallway outside of the apartment to maintain an upper-middle class look for the home of Michael and Penelope.

Costume designer Milena Canonero does some very good work with the costumes from the suits and more posh clothing of Alan and Nancy to the more casual look of Michael and Penelope. Visual effects supervisor Mikael Tanguy does some terrific work in the minimal visual effects uses by creating some exterior New York background of buildings as the film is shot on location in Paris. Sound editor Thomas Desjonqueres does a wonderful job with the sound to capture some of the backgrounds outside of the apartment along with its intimacy inside. The film’s score by Alexandre Desplat is fantastic for its bombastic arrangements as it only appears in the film’s opening and closing credits.

The casting by Fiona Weir is great as it features appearances from Eliot Berger and Elvis Polanski as the two kids who get into a fight along with a cameo from Roman Polanski as a neighbor of Michael and Penelope peering briefly when the two couples argue outside. Christoph Waltz is wonderfully charming as the very distracted and business-talking Alan who always talk into his cell phone and say snide things where he finds a comrade in Michael. John C. Reilly is fantastic as the laid-back Michael who starts off being nice and gracious only to become crude in his view about genders and parenting. Jodie Foster is excellent as determined Penelope who wants civility in the conversation only to lose it as she is under attack for socialist views on the world. Kate Winslet is phenomenal as the gracious Nancy who wants to go to the point until she becomes sick and annoyed as she starts to lash out at everyone in a drunken state.

Carnage is an extraordinary yet provocative comedy from Roman Polanski. Featuring an outstanding ensemble cast led by Jodie Foster, John C. Reilly, Kate Winslet, and Christoph Waltz. It’s a film that does a whole lot more than its premise suggests while giving its actors a chance to display their range in a theatrical setting and go all out. While the idea of watching four people argue for 76 minutes might not seem like a fun film to watch. It does take its time once things get to unfold as Polanski and his actors definitely raise the bar in terms of bawdy behavior and crass subject matters. In the end, Carnage is another glorious yet out-there film from Roman Polanski.

Great review! I liked the film but I thught the ending was kinda weak - the entire movie there is an escalation of the emotions and then it just...ends. I thought the best parts were the cinematography and Waltz's performance he was absolutely hilarious.

I actually liked the way it ended. You kinda knew the arguments weren't really going to end and once the closing credits happened and what was being shown. I was laughing because I realized that if anything. Something was going to find a way to resolve things as it indicates that it's just a silly schoolyard fight.

I really liked what Polanski is doing. I think he's on a roll right now.

the dialogue was a little on-the-nose but i agree the technicals were good and it was really well directed by polanski (and another interesting film in his amazing oeuvre). i think it's a bit underrated actually.

@Mr. Jeffrey-I actually liked this a whole lot more than the majority of the critics who were more kind rather than be very high on the film.

I loved the fact that Polanski just wanted to make the whole film seem so fun by having the camera follow everything that is happening. I bet he, the cast, and crew had fun making this film. I am now anxious for what he will do next.