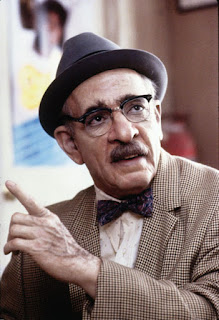 I have been hoping this film gets selected for the LAMB MOTM for a while now. I never get tired of watching this film, the jokes still hold up years later. Even the romance still plays well. Great review.

I've been voting that film constantly as well.

I can quote that movie from start to finish. I love it so much.

"See, that's the problem. I can't find a man that can satisfy me. Some go one, an hour-and-a-half. Man's gotta work overtime for me honey".

"I'm not interested in a man unless he drives a BMW. Yeah baby, you know I'm almost single. My husband is on death row. This is the first date we've been on... since the doctor separated us. I'm into the group thing. I was Joan of Arc in my former life. My name is Peaches and I'm the best. All the DJs want to feel my breasts. Hiccup, hiccup, hiccup."

And my favorite part... "I hope you don't mind me sitting but I've been watching you from afar. And I want to tear you apart! And yo' friend too!!"