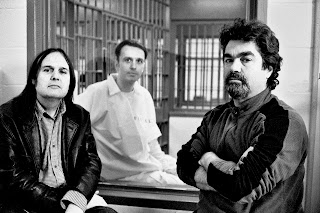 Directed by Joe Berlinger and Bruce Sinofsky, Paradise Lost 3: Purgatory is the third part of a trilogy of films relating the 1993 child murders at Robin Hood Hills in West Memphis Arkansas where three teenagers were accused of the crime. Starting with its first documentary in 1996 and its follow-up in 2000, the third film follow Damien Echols, Jason Baldwin, and Jessie Misskelley Jr. as they each serve prison sentences for the crime. When their defense team and support group uncover more proof of their innocence, it leads to secrets of incompetence relating to the case as well as a new suspect. The result is a more thrilling yet evocative film from Joe Berlinger and Bruce Sinofsky.

In the first two films about the murders that happened back in 1993, a lot of fingers were pointed at Damien Echols as being the supposed ringleader of the murders as part of a Satanic cult ritual. Echols, Jason Baldwin, and Jessie Misskelley Jr. all have maintained their innocence as the most of the film’s first half is a look back at the previous films with new comments from lawyers and various people from the previous films. Particularly as Echols’ attorney talks about the evidence that was overlooked leading to the 2007 press conference that revealed new evidence that proved that the three men are innocent. What is more shocking is the new suspect that is presented in the form of Terry Hobbs, the stepfather of one of the murder victims in Stevie Branch.

While Hobbs maintains his innocence while going into a defamation suit against Dixie Chicks singer Natalie Maines over comments she supposedly made. There is some evidence about the fact that he is a suspect which is presented by John Mark Byers, the stepfather of victim Christopher Byers, with facts about Hobbs’ whereabouts on that day. The Byers character, who had been a prominent figure in the previous films, is shown in a more restrained light as he has dealt with loss as well as being a suspect. Since he didn’t kill the children, he revealed his own faults of accusing the three men who had been suspected. Through the new evidence revealed, he becomes a supporter while receiving an apology letter from Echols who had suspected him years ago.

The film also picks up where the second documentary left off as Echols was facing a death sentence as he, Baldwin, and Misskelley kept fighting through appeals with help from the West Memphis 3 support group and their attorneys. Misskelley reveals more about what happened on the day he made his false confession which showed more injustice from the police department. A former secretary for a lawyer revealed that jury tampering had happened because someone wanted to be a foreman for the jury in the Echols-Baldwin case back in 1994.

The structure of the film is much tighter than its predecessors due to the fact that the film is presented in chapters. The first one is a prologue about everything told in the previous films and the second and third chapters are about the new evidence and suspicions towards Terry Hobbs. Then comes this epilogue at the time the film was in post-production where it revealed something that could’ve prevented a trial and more appeals to happen in the coming years. What Echols, Baldwin, and Misskelley are given is in the form of a compromise which would end the film. Yet, it’s an unsatisfying one considering the legal circumstances that is presented. Not surprisingly, there is a sense that justice was not served and the fact that the real killer is still loose somewhere. The accused aren’t satisfied nor are their families and the families of the victims. It’s a very mixed reaction considering what the three men had to do to be freed.

While the direction of Berlinger and Sinofsky is still the same in their approach to open the film with aerial shots of West Memphis. Yet, there is a more sense of control to that presentation as it isn’t as overt while they get to be on camera in a few instances as they talk to Echols in an interview and deal with the aftermath of the case. With camera work from Robert Richman and wonderful editing by Alyse Ardell Spiegal to gather all of the old footage to create new ones. The technical work is still stellar as the music features a haunting ambient score by Wendy Blackstone as well as songs from Metallica.

Paradise Lost 3: Purgatory is a superb film from Joe Berlinger and Bruce Sinofsky about the West Memphis 3 and the murders they were accused of. For those who hadn’t seen the previous films, it does give viewers a chance to see what was shown in those films without really needing to see them. For those that had seen the previous films, it would give them a chance to piece out everything else that had seen to figure out what was missed. In the end, Paradise Lost 3: Purgatory is an excellent and provocative documentary from Joe Berlinger and Bruce Sinofsky.

I don't want to read these reviews until I've seen the films, but how did you get ahold of them? I cannot find them anywhere without buying them. Worth it?

All three films were on HBO for the premiere of the new film and I got to DVR them.

I'm not sure if it's available online but the third film is currently on HBO channels right now. I would recommend seeing that one for the time being as it features stuff from the first two films.

Good stuff, I have HBOGO so I'm gonna check it out this weekend. Thanks for the info!

Can't wait to see this final part. So glad I only just watched the other two and haven't had such a long wait to find out how this story would end.

@Pete-There's new in the first 30 minutes of the film since it is a composite of clips from the first 2 films but new things do get unveiled in the course of it. The whole trilogy is amazing.