Originally Written and Posted at Epinions.com on 9/12/04 w/ Additional Edits. 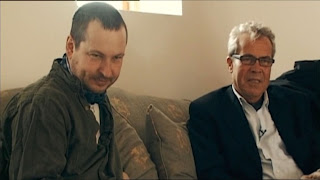 In 1967, Danish filmmaker Jorgen Leth made a 13-minute short film entitled The Perfect Human that examined the behaviors and oddities of human beings. The movie was a cult classic with short-film fans while Leth has made some fine films in his native Denmark before retiring in the 90s. Nearly 35 years since its release, Leth was suddenly coaxed by one of his students to return to making films. That student was none other than Danish bad boy auteur Lars von Trier. Seeing The Perfect Human around 20 times in his lifetime, von Trier asked that Leth to remake the short film, five different times with different guidelines for a documentary made by the two men called The Five Obstructions.

The Five Obstructions is a documentary-of-sorts spanning nearly two years from 2001 to 2003. Playing the role of the obstructor is von Trier himself, as he challenges his mentor to remake sections of his old short film in five different areas with rules, and all sorts of things. The film serves as a battle-of-wits between teacher and student with both men passionate about their art. With each film being made and completed, von Trier would force Leth to go through some difficult guidelines that challenges both Leth’s mentality and vision for remaking his old short film. With the two men battling each other in their minds, the result isn’t a shocking surprise at who wins but the joke that comes out of it. The Five Obstructions is an entertaining and provocative documentaries from Jorgen Leth and Lars von Trier.

The film begins in April 2001 at Lars von Trier’s Zentropa film studios where he invites his old mentor Jorgen Leth to watch Leth’s old short film, The Perfect Human. The enfant terrible von Trier then proposes a challenge for Leth to return to making films. He wants Leth to remake the short film, five different times. Leth likes the idea at first and accepts the challenge but the sadistic von Trier has a huge surprise. For the first short film, he asks these following instructions:

1. The film must be done in 12 frames.
2. No set should be built.
3. The questions that Leth asked in the original film should be answered.
4. Must be shot in Havana, Cuba.

Leth is shocked that the film must be shot in 12 frames, especially with the editing. Leth goes to Cuba to shoot the film, where he admits the difficulty of shooting a film in 12 fps with a stop-motion camera. With his cinematographer, Dan Holmberg, they figure out how to shoot the film with just Cubans as the actors and how the film should be narrated and such. Finally, after a few days, they figured out everything with help from editor Camilla Skousen. Months later, Leth shows von Trier the first obstruction. The film shot with a fast-paced editing style with stop-motion cameras in 12 frames, the film showed a colorful viewing of Cuba with the Perfect Man (Daniel Hernandez) dancing to music while the Perfect Woman (Jacqueline Arenal) lies on the bed.

1. It must be shot in a miserable place
2. That place must not be shown
3. Jorgen Leth will play the Perfect Man
4. Include a meal scene

Leth chooses Bombay to go to shoot the second film because he felt the place was miserable because of its poor economics and look. This makes Leth extraordinarily depressed because of the city’s situation where he gives woman money on his way to the hotel. Then, he tries to rehearse for the lines and movements he plans to do since he is going to play the Perfect Man. After finding a location in a street market, Leth shoots the scene with a transparent background set so people of Bombay can watch behind him as he eats his fish, shave, take off some clothing, and do some jumps. Upon returning from Bombay in 2002, he gives von Trier his final cut, who wasn’t impressed. Notably the transparent background since von Trier states, don’t show the miserable place, where he decides to punish Leth with the third upcoming obstruction:

Go back to Bombay and remake everything or, make a completely new version with no rules.

Leth goes to Brussels with Holmberg and Skousen along with a new writer, Asger Leth, to make a completely, different version. Leth chooses veteran actor Patrick Bauchau and actress Alexandra Vandernoot for the leading roles while he looks at a hotel for location, where he hears a couple having sex. The result is a polished, noir-like short where Bauchau’s character is examining his own mind and Vandernoot looking for a man. With various characters shot including a maid and a couple having sex, the result becomes another impressive remake where von Trier now thinks of his next challenge. Meeting on September 12, 2002, von Trier decides to have the next obstruction become this:

Make the film into a cartoon

Leth and von Trier hate cartoons, which is why von Trier chose that idea. Leth couldn’t possibly come up with a cartoon since he has no training in animation but still decides to do it. While on holiday in Haiti, he has found an idea and chose Bob Sabiston, the animated director who was responsible for the colored-animated imagery of Richard Linklater’s 2001 masterpiece Waking Life. Flying to Austin in January 2003, he meets Sabiston for the ideas he proposes as Sabiston helps. With footage from the previous obstructions films and the original one plus new scenes, the cartoon version serves a surreal, multi-faceted, multi-colored short. The film stunned von Trier as Leth was amazed that he actually liked it. Then, von Trier proposes the fifth and final obstruction:

1. Lars von Trier will direct the short.
2. Jorgen Leth will receive credit as the director.
3. Leth will narrate the film’s script written by von Trier.

Leth is amazed as he returns to Denmark in April 2003 to watch the final obstruction. The resulting film isn’t just a profile on Leth’s work on his previous films but an examination on Leth himself but with a huge twist right at the end where Leth narrates von Trier’s final script.

The Five Obstructions is clearly one of the most interesting concepts ever put into cinema. While the documentary shot by von Trier and Leth with cinematographers Holmberg and Kim Hattesen on the documentary footage, shows the two men being playful towards each other along with this strange game the audience is watching. The joke in the end of the film shows who is manipulating who and the roles suddenly, become very awkward. While all short films and its principal actors are all wonderful, the concept of The Five Obstructions is amazing and makes you want to see some filmmakers go head-to-head against each other. In the end, The Five Obstructions is by far the year’s best documentary film because of its strange concept of filmmaking that makes Lars von Trier, a more interesting film personality than anyone in cinema.

Lars von Trier Films: The Element of Crime - Epidemic - Medea - Europa - The Kingdom I - Breaking the Waves - The Kingdom II - Dogme #2-Idioterne - Dancer in the Dark - Dogville - Manderlay - The Boss of It All - Antichrist - Dimension (2010 short) - Melancholia - Nymphomaniac - The House That Jack Built - The Kingdom: Exodus - (Etudes)