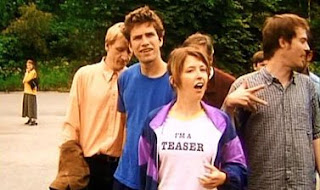 Written by Lars von Trier, Idioterne (The Idiots) aka Dogme #2 is a film about a woman who encounters a group of rich bourgeois individuals who rebel against the class in order to channel their inner idiot. The second part of von Trier's Golden Hearts trilogy following Breaking the Waves in 1996, Idioterne focuses on a woman named Karen (Bodil Jorgensen) finding herself part of a group of people rallying against the rules of society. In response to society's rules, a group of people act out by spazzing and acting like mentally challenged or disabled people.

Karen is at a restaurant where she watches a man named Stoffer (Jens Albinus) acting out in a rage with friend Henrik (Troels Lyby) where Stoffer grabs Karen's hand until she's saved by Sussanne (Anne Louise Hassing). After learning that Stoffer was acting out so he wouldn't pay his check, she joins Stoffer and his friends to a factory where they meet a group of possibly mentally-challenged people. Leaving on a small bus, Karen is introduced by more of Stoffer's friends in his posh home as they're all being filmed for a documentary. Meeting the rest of Stoffer's friends that includes Axel (Knud Romer Jorgensen), Jeppe (Nikolai Lie Kaas), Josephine (Louise Mieritz) Ped (Henrik Pib), Nana (Trine Michelsen), and Katrine (Anne-Grethe Bjarup Riis). She takes part in their crazy hijinks to deal with her own loneliness as she tries to call her husband.

With everyone living at the home of Stoffer's uncle (Erik Wedersoe), Stoffer invites a group of mentally-challenged people to have lunch where Stoffer and friends feel they have an advantage for not playing the rules of society. The gang continues to create chaos by selling Christmas candles for an odd amount of money while they meet a woman (Paprikka Steen) who wants to by the house. Karen suddenly starts to act strange as some of the gang reluctantly return to their normal life. Yet, Katrine and Stoffer decide to push the edge where they would hold a gang-bang orgy where Karen plays voyeur. Things start to wind down when Josephine's father (Anders Hove) arrive to take her home as Stoffer learns about her condition despite the protest of Katrine and Jeppe. With Stoffer's yearn for anarchy starts to falter, Karen would make a big sacrifice to up the ante for the whole gang's antics.

Since the film is a Dogme movie, it's clear that the direction the director has chosen is in the spirit of the movement. Pure anarchy. The film is about a group of people rebelling against society while a woman is willing to sacrifice her own sanity to find a place where she feels she's a part of. The film's script by Lars von Trier is really an outline for social commentary on society and the middle class which Stoffer is rallying against. Yet, the antics in the film through its direction is very improvisational.

In the end, Idioterne is a radical, uncompromising, unconventional, anarchistic film from Lars von Trier. While not as good as his previous film Breaking the Waves or the more conventional Dancer in the Dark two years later. This film is still quintessential von Trier in all of its radical form.

Lars von Trier Films: The Element of Crime - Epidemic - Medea - Europa - The Kingdom I - Breaking the Waves - The Kingdom II - Dancer in the Dark - Dogville - The Five Obstructions - Manderlay - The Boss of It All - Antichrist - Dimension (2010 short) - Melancholia - Nymphomaniac - The House That Jack Built - The Kingdom: Exodus - (Etudes)