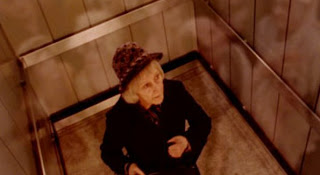 Riget II (The Kingdom II) is the sequel to the 1994 TV mini-series created by Lars von Trier about a Danish hospital being haunted by strange happenings involving the supernatural. For its second part that is directed by von Trier and Morten Arnfred with scripts written by von Trier and Niels Vorsel. The sequel has many of the mini-series previous characters returning as it involves more supernatural mysteries involving a baby born in a man’s body, voodoo, and all sorts of bad things. Starring Ernst-Hugo Jaregard, Kirsten Rolffes, Holger Juul Hansen, Soren Pilmark, Ghita Norby, Baard Owe, Birgitte Raaberg, Henning Jensen, Erik Wedersoe, John Hahn-Petersen, Birthe Neuman, and von Trier regular Udo Kier along with an appearance from another von Trier regular in Stellan Skarsgard. Riget II is an even crazier and stranger mini-series than its predecessor.

Episode 5: Death on the Operation Table

After being hit by an ambulance, Mrs. Drusse (Kirsten Rolffes) returns to the hospital as she realizes that more spirits need her help as Bulder (Jens Okking) and Hansen (Otto Brandenberg) help her out. Returning from Haiti, Dr. Helmer (Ernst-Hugo Jaregard) conspires to poison Hook (Soren Pilmark) as he is asked by Moesgaard (Holger Juul Hansen) to manage things at the hospital. Moesgaard tries to deal with the country’s health director Bob (Henning Jensen) and his assistant Nievesen (John Hahn-Petersen) over funding forcing him to seek help from the hospital‘s rogue shrink Ole (Erik Wedersoe). Hook looks after Judith (Birgitte Raaberg) as he convinces her to see her new mutated baby (Udo Kier).

After her near-death experience, Mrs. Drusse realizes her mission to save the lost souls in the hospital is bigger than ever under the watchful eye of an evil presence. Meanwhile, Helmer gains an electric car while dealing with detectives about Mona (Laura Christensen). With Mogge (Peter Mykind) becoming Helmer’s assistant, he also tries to help his friend Christian (Ole Boisen) to woo Sanne (Louise Fribo). Moesgaard tries to deal with Ole’s unconventional tactics along with the presence of Bob who continues to meddle in the activities of the lodge. With Bulder helping out his mother to get a psychic surgeon named Philip Marco (Fash Shodeinde) who would have an encounter with the recovering Bondo (Baard Owe). Things get stranger as Helmer tries to find Hook’s body while Mrs. Drusse holds a seminar for the spirits asking what they want.

After being shot by Rigmor (Ghita Norby), Helmer’s plan for Hook is changed when Hook has returned from the dead seeking vengeance on Helmer. Judith and her baby receives a strange visit from Aage Krger (Udo Kier) as Mrs. Drusse realizes that he is here and was the man who flew away the spirits. Helping out Moesgaard and the elders of the lodge, Nievesen tries to make sure things go right for Bob’s inspection while Helmer meets a lawyer (Stellan Skarsgard) about Mona’s case as they share their disdain towards the Danes. Christian continues to pursue Sanne while Mogge becomes overwhelmed by his relationship with Camilla (Solbjorg Hojfeldt). After realizing what is lurking inside the hospital, Mrs. Drusse makes a plan to uncover the secret while Helmer finds himself in big trouble as evil starts to emerge into the hospital.

Following a plane crash that nearly killed them, Mrs. Drusse and Bulder go further into the hospital where they find a much darker secret involving Satanic rituals. After going through a series of humiliating ordeals involving the lodge, Rigmor, Mona, Mogge‘s examination test, a server, and losing his beloved car, Helmer goes on the offensive. Bondo’s ailment starts to get to him as members of the lodge desperately try to find a donor where the candidate is the most unlikely person in the hospital. Christian decides to make a move to prove to everyone he’s not a bore while Moesgaard has an epiphany through Ole’s treatment. All of this leads to a collision where Mrs. Drusse tries to uncover who is one of the dark souls in the hospital as all hell breaks loose.

In the sequel to Riget, things become even stranger and looser as the story revolves more about Mrs. Drusse’s attempt to save the spirits around her in the hospital while dealing with the big evil lurking inside. Meanwhile, Helmer returns to Haiti to try and poison Hook only to counter more trouble as detectives are after him about his botched surgery on Mona along with all sorts of trouble. Hook gets poisoned as he decides to go after that is wrong while Judith tries to take care of her deformed, mutant baby. All of this is told once again by the two Down syndrome dishwashers (Morten Rotne Leffers and Vita Jensen) who know that something is up or something is going to happen.

The script by Lars von Trier and Niels Vorsel is much looser than its predecessor as the structure is more disjointed where there is a way each episode in the first mini-series had. In the second part, the early meetings don’t happen quite often early on as Helmer no longer has his car while Moesgaard is dealing with various issues. Though each episode does have Helmer saying “Danish scum” towards the end onto a toilet. Things definitely get much weirder and confusing as it all builds up to this climatic suspense over what is watching the Kingdom hospital. Since there was supposed to be a follow-up for this second part of Riget, unfortunate circumstances, due to the death of a few key actors, leaves the series with an ending that leaves everything in a cliffhanger with more questions than answers.

The direction of Lars von Trier and Morten Arnfred is much looser in terms of its presentation as well as more ambitious ideas. Among them is the design of Judith’s baby as well as the use of more set pieces beneath the realm that is the Kingdom. With the camera work much looser and jarring for its presentation where the framing becomes more off-kilter as the camera is often moving around or staying still in a very tilted approach. The visual style remains the same but there is this very green, night-vision look to it that emphasize that something evil is lurking around. The humor is definitely more off the wall as it even lean towards darker territory which includes various orderlies and medical students betting on a crazed ambulance race that happens every night. The overall work that von Trier and Arnfred does is more entrancing as well as being more unconventional in creating a sequel that is just as good as its predecessor.

Cinematographer Eric Kress does a fantastic job with the mini-series‘ grainy yet sepia-drenched 16mm cinematography to play up more of its visual style as well utilizing night vision for the evil presence lurking throughout the series. Editors Pernille Bech Christensen and Molly Marlene Stensgaard do great work in the editing to maintain a very loose feel for its pacing while utilizing jump-cuts to create a disjointed feel throughout each episode. Production designers Jette Lehmann and Hans Christian Lindholm do excellent work in creating the set pieces such as the dark hallways and mysterious places lurking in the hospital as well as the rooms and such that many of the characters encounter. Costume designer Annelise Bailey does a very good job with the costumes made such as the hospital lab coats and casual clothing many of the characters wear.

Special effects makeup by Kim and Lis Olsson do amazing work with the look and design of Judith‘s baby from its long arms and big body to the makeup work that is made for Udo Kier. Special effects by Lars Andersen and Annette Rolfshoj is superb for the effects made for the spirits that surrounds Mrs. Drusse as they help her in her mission to save the hospital. The sound work of Hans Moller is wonderful for the atmosphere that is created along with mixes to help build up the suspense that occurs throughout each episode. The score by Joachim Holbek is terrific for its chilling electronic pieces to play up the drama while utilizing more rhythmic cuts for its suspenseful moments.

The ensemble cast for this mini-series is truly the highlight of the entire project as it features some notable appearances from Stellan Skarsgard as Helmer’s lawyer, Birthe Neumann as Moesgaard’s secretary who often annoys Helmer, Ole Boissen as the very timid Christian, Louise Fribo as the blood-phobic Sanne, Solbjorg Hojfeldt as Mogge’s sleep lab older girlfriend Camilla, Annevig Schelde Ebbe as the ghost Mary, and Laura Christensen as brain-damaged girl Mona. Other noteworthy supporting roles include Henning Jensen as the snoopy director Bob, John Hahn-Petersen as Bob’s assistant Nievesen, Erik Wedersoe as the eccentric psychiatrist Ole, Otto Brandenberg as the humorous orderly Hansen, Birgitte Raaberg as the weary yet maternal Judith, and Udo Kier in dual rules as Judith’s baby and his demonic father.

Jens Okking is very funny as the lazy but helpful Bulder while Baard Owe is very good as the ailing yet driven Bonde. Peter Mygind is wonderful as the very upbeat and charming Mogge as is Ghita Norby as the vengeful but cunning Rigmor. Morten Rotne Leffers and Vita Jensen are brilliant as the two dishwashers who comment everything that happens as they each bring a wonderful enthusiasm to their roles. Soren Pilmark is excellent as the vengeful Hook who comes back from the dead to go after the ills he sees.

Holger Juul Hansen is terrific as the kind but insecure Moesgaard who tries to deal with his own personal issues. Kirsten Rolffes is fantastic as Mrs. Drusse who becomes more determined to save lost spirits following her own near-death experience. Finally, there’s Ernst-Hugo Jaregard in an amazing performance as Stig Helmer as Jaregard makes Helmer more despicable but also funny as it’s a great role for the legendary Swedish actor.

Riget II is a dark yet more off-the-wall TV mini-series from Lars von Trier and Morten Arnfred. While the only disappointing factor is that there won’t be a third part due to the deaths of Ernst-Hugo Jaregard, Kirsten Rolffes, and Morten Rotne Leffers. It does however manage to be a very exciting follow-up to its 1994 predecessor that never gets boring nor keep things off track while still being very crazy. In the end, Lars von Trier and Morten Arnfred deliver once again with Riget II as it reminds everyone to keep the good with the evil.

Lars von Trier Films: The Element of Crime - Epidemic - Medea - Europa - The Kingdom I - Breaking the Waves - Dogme #2: Idioterne - Dancer in the Dark - Dogville - The Five Obstructions - Manderlay - The Boss of It All - Antichrist - Melancholia - Nymphomaniac - The House That Jack Built