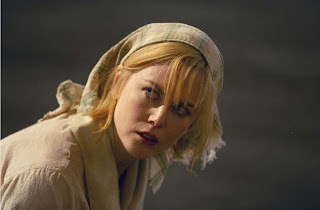 Written and directed by Lars von Trier, Dogville is about a young woman named Grace in 1930s Great Depression running away from the mob as she hides in a quiet town in the Rocky Mountains where she befriends a man who helps her. Seeking refuge in the town where the locals give her labor work, things start out fine until it escalates where Grace becomes mistreated by the locals. Playing the role of Grace is Nicole Kidman who leads a rich ensemble cast that includes von Trier veterans Sioban Fallon-Hogan, Stellan Skarsgard, Jean-Marc Barr, Udo Kier, and Zeljko Ivanek, as well as film veterans Phillip Baker Hall, James Caan, Lauren Bacall, and Ben Gazzara plus Paul Bettany, Jeremy Davies, Chloe Sevigny, Patricia Clarkson, Blair Brown, and narration by John Hurt. Dogville is a haunting yet provocative film from Lars von Trier.

In the small mining town of Dogville in the Rocky Mountains, a philosopher named Tom Edison (Paul Bettany) hears a gunshots nearby as a woman named Grace arrives into town seeking refuge. With Grace hiding in the mines, Tom learns that Grace is hiding from a mob led by its leader (James Caan) as they want to know about her whereabouts. While Tom told him that she's not here, he is given a card in case she does arrive as they leave. Tom holds a town meeting with the locals to introduce Grace as she is given a two-week trial run to see if she can fit by doing usual labor work. While she manages to befriend the blind Jack McKay (Ben Gazzara) and help out various locals including the grouchy apple farmer Chuck (Stellan Skarsgard) during the trial-run. Grace is accepted where things seem to go fine as she continued to help out and such.

After a 4th of July picnic when a cop posted posters of Grace being wanted for robbery, things become tense as Grace chooses to work for less wages. Yet, Grace finds herself dealing with all sorts of trouble as she gained the ire of the local women led by Chuck's wife Vera whose young son Jason (Miles Purton) was spanked when he was trying to provoke Grace. After Grace claimed that Chuck had raped her during a visit from the cops, Vera refuses to believe by smashing the little figurines Grace had bought some time ago. Grace decides to leave Dogville with the help of Tom and garage worker Ben (Zeljko Ivanek) that doesn't go well at all when Ben returns to Dogville as Grace had been accused of stealing money from Tom's father (Philip Baker Hall).

Grace is forced into doing slave labor while being a sexual tool for the men in the town as Tom feels that things have gone too far. After some truths were unveiled, Tom decides to call up the mob leader where a bigger shock is revealed about Grace's identity in relation to the mob.

The film presentation of Dogville is clearly one of the most original ideas as the entire movie feels like a play with minimal settings, cars driving in and out of the soundstage while doors are being opened by mimic since there's no doors built, and a fake mountain near the edge of the set. In many respects, Lars von Trier has once again made his mark as a groundbreaking filmmaker by just stripping everything down to the essentials. With help from production designer Peter Grant and set decorator Simone Grau, the film's set plays up to Great Depression-era America as well as the costumes by Manon Rasmussen. The film has this strange look where in the day scenes, there's a white background surrounding and a black for night.

Even when there's weather, leaves, snow, and all sorts of things fall down just to give the film a strange, cinematic feel. Even the film's score from the compositions of Antonio Vivaldi plays up to the innocence of the town as well as its suspense and drama as the film's mood changes. One notable musical piece that is set to the film's disturbing final credits of America in ruins is presented with the musical accompaniment of David Bowie's Young Americans.

With a dizzying, video look from cinematographer Anthony Dod Mantle, the film has this strange, avant-garde tone to the film as von Trier also plays the role of camera operator as the film has not just a hand held feel. Also a TV-like production feels as if a play is being filmed. The real genius of the film is easily von Trier as he brings in a fluent, storytelling direction that is masterful as he doesn't even let the pacing of the film slow things down or make things fast, especially since the film is 3-hours long.

Even the film's screenplay is filled with brilliance as the story and characters starts off innocently and then evolves into something very ugly. Now for those who found the ending to Dancer in the Dark to be quite sadistic will find the ending in Dogville much more disturbing and ugly. At times, the characters can be sympathetic but as the story evolves, it becomes blurry as the actions of the people of Dogville become more sadistic.

What makes Dogville such a compelling film isn’t just how American society is back then but in relation to today's society. What von Trier does is provide all sorts of ambiguities and symbolism, particularly in the little things in the set like the China figurines that Grace cherishes and Ma Ginger's Gooseberry bushes. There's a fine line in the story at what goes on and when it comes to the ending, it comes with this sense of realization at not just what the people in Dogville are but to America as well. In many aspects, von Trier isn't trying to knock down American society but the politically incorrectness and restriction on what this country has become.

If von Trier has had a great cast before in his previous films, he certainly topped them all with everyone in this film. You can never put a better ensemble cast as better as this. While the roles of Cleo King, Harriet Andersson, Shauna Shims, Jean-Marc Barr, and Udo Kier are small, they were all well-performed and fun to watch as Cleo King plays up to the mood of the African-American housemaid while overcoming the stereotype just as the film evolves since she ends up being treated like a equal. The roles of Chuck and Vera's children are well-performed, particularly Miles Purinton as Jason who probably gets his first S&M lesson from Nicole Kidman in one of the film's most hilarious scenes. While Blair Brown and Bill Raymond are well used as the Henson parents as well as Jeremy Davies as the dimwitted Bill is used, Chloe Sevigny stood out the most among the family as she tries to play up as a rival to Kidman's Grace for the affections of Tom Edison.

Siobhan Fallon Hogan and Zeljko Ivanek also does standout performances in their roles as well as the enigmatic Lauren Bacall as the wise Ma Ginger who ends up becoming a real mean lady to Grace. Stellan Skarsgard is excellent as the grouchy Chuck as he plays up in a very vulnerable role in earlier scenes with Grace as he shines in the rape scene where he reveals his huevos grandes. Phillip Baker Hall is also excellent in his role as Tom Sr. while Ben Gazzara is amazing as the blind Jack McKay, who too becomes a dirty old man.

Of the entire supporting cast, no one stood out better than Patricia Clarkson (who replaces the late Breaking the Waves actress Katrin Cartlidge, who the film was dedicated to) as Vera, who starts out very nice but once she gets mean, she is really mean as the current indie queen gives Kidman a lesson in indie meanness. James Caan, of course is brilliant in the film's final act as he meets with great with a surprise revelation as he doesn's come off as the classic mob criminal by just playing the role charismatically and with subtlety that is very surprising from the film legend.

Of the male cast, no one shines more than Paul Bettany. Bettany brings in an anguished, sympathetic performance as Grace's love interest while he comes up with all of these mindless theories. As the film develops, Bettany's Tom Edison might seem to be the most innocent of all characters but as the film ends, he's not what he seems as well. The narration of John Hurt of course is spoken very elegant as if he plays the lost citizen of Dogville as he watches everything through his own words and it's easily one of the best narrations ever heard in cinema. Finally, there's Nicole Kidman in one of her great performances of her career in the role of Grace. Kidman brings a real vulnerability to a woman just wants to do good though there is also something not right about her as the film progresses giving Kidman a bigger edge to her character.

Dogville is a dark yet extraordinary film from Lars von Trier featuring a brilliant performance from Nicole Kidman. The film is one of von Trier's essential projects as well as one of his most daring in terms of presentation and what von Trier had to say about American intolerance. While it's not an easy film to watch due to its theme and a three-hour length. It is still a film that dares to ask big questions while being powerful enough to be provoking. In the end, Dogville is a magnificent film from Lars von Trier.

Lars von Trier Films: The Element of Crime - Epidemic - Medea - Europa - The Kingdom I - Breaking the Waves - The Kingdom II - Dogme #2-Idioterne - Dancer in the Dark - The Five Obstructions - Manderlay - The Boss of It All - Antichrist - Dimension (2010 short) - Melancholia - Nymphomaniac - The House That Jack Built - The Kingdom: Exodus - (Etudes)

I know this film rubs a lot of people, and I mean a lot, the wrong way but I absolutely love Dogville. It is in my top three when ranking Lars von Trier films. What I love about it the most is how you get so wrapped up in the story that you start to forget the sparse production design of the film.

Yes, I can see most people's complaint that he is making a broad generalization about America without having ever visited, but that is really no different than the generalizations that Hollywood makes about foreigners. I hope, years from now, people will look back on this film and see how truly brilliant it really is.

I got to see the film at a special screening back in 2004 at the Atlanta Museum of Arts. It was a great screening that divided audiences.

I think it's one of von Trier's most essential films. He definitely took the balls to say something about the way American treats its foreigners and put it right in their faces.

When is he going to go back to that and make Wasington? I think he needs to do it and I think he has the right actress to do it. Get Kirsten Dunst in the role of Grace. Maintain the same art direction style and staging of the film but take some of the visual he tricks he did with his previous films. He needs to do that.

I agree completely about Clarkson and Bettany, they gave amazing, layered performances. I liked the first half of the movie but then it went the usually Von Trier route. It picked itself up a little bit in great ending, Kidman had one of her finest moments there.
Excellent review!

@Sati-It's a film that requires some patience as well as finding the right time to watch it. It's intentional to be quite slow and drawn-out yet it's only because von Trier wanted to how flawed these people are who by the film's second half.