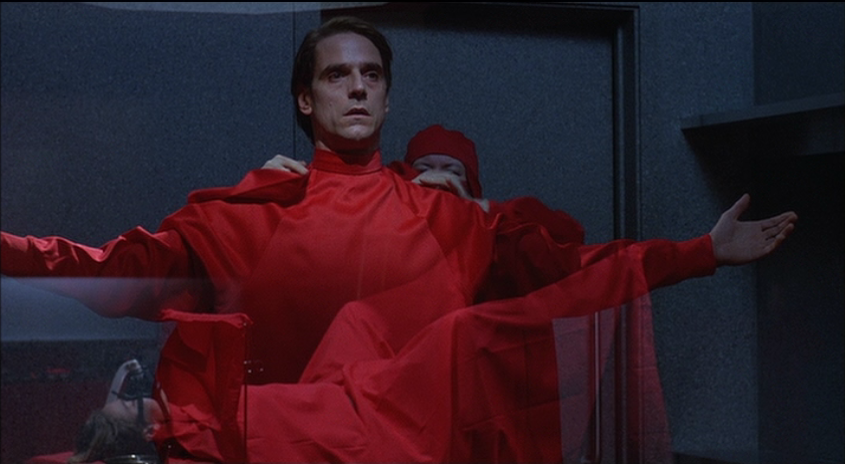 Based on the novel Twins by Bari Wood and Jack Geasland, Dead Ringers is the story of two identical gynecologist twins whose close relationship is tested by the arrival of a pill-popping woman who carries an abnormal reproductive system. Directed by David Cronenberg and adapted into script by Cronenberg and Norman Snider, the film is an exploration into the lives of twin brothers and the strong bond between the two of them. Starring Jeremy Irons and Genevieve Bujold. Dead Ringers is a chilling yet mesmerizing film from David Cronenberg.

Since they were children, Elliot and Beverly Mantle (Jeremy Irons) have been interested in the human body as they’ve become very successful gynecologists. With Elliot being the business mind of the practice and spokesman for their studies, Beverly does all the actual research as he is a respected surgeon. Then on one particular day, Beverly examines an actress named Claire Niveau (Genevieve Bujold) who carries an abnormal reproductive system as Elliot looks into her body as he would go on a date and later sleep with her as he does with all women. When he gets Beverly to meet up with Claire as Elliot, the shy twin reluctantly does so only in his interest of her abnormality where the two start to have a relationship.

Elliot isn’t so keen on the relationship nor her use on prescription drugs that she likes to use often as Beverly becomes addicted to pills. After learning that Elliot and Beverly are twins, Claire breaks it off only to realize how strong her feelings are for Beverly. With Elliot out of town to speak in seminars and Claire having to leave for work, Beverly’s addiction to pills start to take its toll when he believes Claire is cheating on him. With an obsession over Claire’s abnormality, Beverly goes to metal-based artist named Andre Wolleck (Stephen Lack) to construct bizarre tools for gynecology. Elliot learns about Beverly’s addiction and his obsession for constructing strange tools as he is desperate to save him. Notably as Elliot realizes that he needs Beverly more than ever for the sake of their future as he starts to fall apart.

The film is about identical twin brothers whose life has been dedicated to the world of medical discovery where they are successful and respected. Yet, the Mantle twins have differences despite the fact that not many people could tell them apart. Elliot is a charmer who can talk to people and is very confident while sleeping with numerous women without much care. Beverly is the more reserved of the two who is dedicated to the science of surgery and discovering things as he also would provide Elliot things for their thesis. Yet, the two do share things like brothers although Beverly would get whatever women Elliot already had. When they come across an actress with an abnormal reproductive system, everything changes as one brother falls apart while the other tries to save him.

The script that David Cronenberg and Norman Snider create is a study of the sibling relationship as well as how fragile it can be. Particularly when one women comes between them due to her addiction to pills as Beverly becomes addicted which would affect his practice. While Elliot is the one who seems to be in control, he would also fall apart once he tries to help save his brother as he would tell one of his lovers about how important Beverly is to him. There is this very meditative insight to this relationship where even though Elliot might often hurt Beverly. He still cares about him while he admits that he is an asshole.

The complexity of the relationship and how Beverly’s emotional and mental deterioration would affect the relationship. Notably when the two brothers talk about the story of famed Siamese twins who would both die tragically. In some ways, the two brothers are Siamese twins that can feel each other from afar when one is hurt. Particularly in the third act when it starts to become about Elliot for a bit as inside his calm persona is a man that is just as fragile as Beverly.

Cronenberg’s direction is very entrancing in the way he presents the film as he starts the film off with a scene of the Mantle brothers as young boys (Jonathan and Nicholas Haley) who talk about the human body. Then it cuts to a scene thirteen years later in the 1960s where they’re young medical students who also have a penchant to be daring and innovative. What Cronenberg presents in these two opening period-based sequences is the Mantle brothers’ rise to fame and glory which then leads to 1988 Toronto where Beverly examines Claire.

The way Cronenberg sets things up early on is an indication that this is not going to be some conventional film. There is a mood to the film that is very eerie from the posh apartment and office the brothers work at to the way they conduct themselves. Cronenberg’s camera is always moving but in a very steady approach to observe that is happening. He also creates compositions where it’s often focused on the brothers in the way the react to each other in one shot of a brother and then cut to the other. There are moments when both brothers are in the same frame with camera tricks to provide that there’s two Jeremy Irons. Cronenberg’s direction is also unsettling in the way he provides very eerie sex scenes that involve rubber ropes. Overall, Cronenberg creates a film that is very engaging but also harrowing in his exploration on the twin-sibling relationship.

Cinematographer Peter Suschitzky does an incredible job with the film‘s photography where he creates wonderful lighting interiors to set the mood for what the brothers are feeling in some of the scenes. Notably when it involves them together as it has a look that is quite evocative though its exterior look is pretty straightforward but wonderful to gaze at. Editor Ronald Sanders does a superb job with the editing as it plays to the rhythm of the conversations while maintaining a methodical approach to the pacing while utilizing fade-outs to smooth out the transitions.

Production designer Carol Spier, along with set decorator Elinor Rose Galbraith and art director Alicia Kewan, does a fantastic job with the set design from the bluish yet very mesmerizing look to the Mantle twins‘ apartment to the more light-colored look of Claire‘s home along with the grisly design of the tools that Beverly obsessed about. Costume designer Denise Cronenberg does an amazing job with the costumes from the very red look of the surgeon gowns that Beverly wears to the more posh suits and clothes the brothers wear. Special effects designer Gordon J. Smith does an excellent job with helping out create the twins as well as the look of a Siamese body part for a nightmarish dream sequence.

Sound mixer Andy Nelson does a nice job with the sound work to capture the mood of the rooms including a scene where the brothers dance with one of Elliot‘s lovers as well as more eerie moments in the film. Music composer Howard Shore does a brilliant job with the film’s score that plays up the emotions of the film from suspenseful yet thrilling orchestral pieces to more somber yet dramatic arrangements to play up Beverly’s troubled mood. One notable music piece played for the double-dance scene is the Five Satins’ In the Still of the Night (I Remember) which adds to the different emotional palettes of the two brothers.

The casting by Deirdre Bowen is wonderful for the casting that is assembled as it features appearances from Jonathan and Nicholas Haley as the young Beverly and Elliot Mantle, Stephen Lack as the eccentric metal-based artist Andre Wolleck, Heidi von Palleske as Elliot’s lover Cary, and in the role of twin prostitutes that Elliot meets, Jill and Jacqueline Hennessy. Genevieve Bujold is terrific as Claire Niveau, the pill-popping actress whom Beverly falls for as she displays a character who is a mess and absorbed though also someone who cares for Beverly not knowing how bad of an influence she is.

Finally, there’s Jeremy Irons in an outstanding performance as Elliot and Beverly Mantle. With help from John Bayliss and Graham Evans as doubles, Irons is able to show his range as twin brothers who are both brilliant flawed. For the role of Elliot, Irons maintains a very stoic approach to the way he presents himself while being charming and crass at times. For Beverly, the physicality that Irons presents is more slumped and awkward while Irons is also more emotive in his approach to the character. The way Irons interacts with himself is a testament to the brilliance that he is as one of the best actors ever.

Dead Ringers is a tremendous yet haunting film from David Cronenberg that features a magnificent performance from Jeremy Irons. The film is definitely one of Cronenberg’s best films for the mood he creates as well as observing the complex relationship between twin brothers. It’s also a film that becomes an acting showcase for Jeremy Irons proving that he can do anything as well as acting with himself. In the end, Dead Ringers is a supremely brilliant film from David Cronenberg.

Great review of one of Cronenberg's best. This is an amazingly creepy film, and Jeremy Irons truly is fantastic in it.

Great review! I really have to see this movie I love Cronenberg and I heard good things about Irons's performance.

@Bonjour-Jeremy Irons is one of those guys where even if he's in a bad movie. He can't suck. I love his voice and he could read a phone book and make it exciting.

@Sati-Thank you. It's one of Cronenberg's essential films and every fan of his must see it.

When I profiled Cronenberg I said that Dead Ringers (along with The Fly and A History of Violence) was one of his masterful films. Love this movie, love Irons in it. Great review.

@Alex-I agree that if I was to pick 5 Cronenberg films to start with. This film would be one of them.

I've already decided that I'm going to do an Auteurs profile on him for 2013. I just need to re-watch his remake of The Fly, try and watch A Dangerous Method and wait for Cosmpolis. Then go back from Scanners and early on.