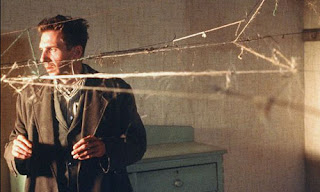 Based on the novel by Patrick McGrath, Spider is the story of a schizophrenic man who tries to piece the memories of his mother’s disappearance as a child as well as memories of his father. Directed by David Cronenberg and screenplay by Patrick McGrath, the film is an exploration on memories and the effects it would have on someone who has become mentally ill. Starring Ralph Fiennes, Miranda Richardson, John Neville, Bradley Hall, Lynn Redgrave, and Gabriel Byrne. Spider is a chilling yet mesmerizing suspense-drama from David Cronenberg.

Dennis “Spider” Cleg (Ralph Fiennes) has just left the mental hospital to live in a nearby safe-house in London as he’s in the care of a woman named Mrs. Wilkinson (Lynn Redgrave). With a room of his own and doing a few duties while befriending an old man named Terrence (John Neville). Dennis tries to piece the memories of what happened to his mother (Miranda Richardson) many years ago when she disappeared back in the 1950s. Tracing back to his memories as a child (Bradley Hall) where he lived a quaint life with his mother and father Bill (Gabriel Byrne) at a home near the London canals.

Dennis believes that his father had been having an affair with a woman named Yvonne (Miranda Richardson) as he thinks they had something to do with the disappearance of his mother. Trying to piece all of the puzzles over what happened, he goes back to the places that he lived as a child to find out what he remembered. Yet, his idea of memory and reality starts to blur when he sees Mrs. Wilkinson looking a lot like Yvonne which only furthers his confusion over what might’ve happened.

The film is about a mentally-ill man’s attempt to reflect on the horrifying memory about the disappearance of his mother and what might’ve happened to her. While he lives at a home where he’s under the care of an old woman who runs a home for those who are either old or mentally-ill as it’s nearby the area that he lived as a child. In this world, he tries to piece out what happened while thinking it all had to do with his father’s affair with a woman he had seen at a bar.

Patrick McGrath’s script is all about a mentally-ill man’s attempt to try and piece his recollections while his perception of memory becomes blurry due to the traumatic events of what happened. McGrath’s script has this great build up in the first two acts where it moves back and forth into past and present with the adult Dennis watching everything he remembers. Though things do become a bit confusing in its third act though it is intentional, the reveal is somewhat of a disappointment. Still, it would allow the audience to go back into recall what happened early in the film that might’ve led to the eventual reveal as McGrath’s script is truly an enigmatic one that brings more questions rather than answers.

David Cronenberg’s direction is quite straightforward in its approach yet there is still an element of style in the way he frames the scenes involving Dennis as he watches his life as a child with his parents to more intense scenes where Dennis mother makes a drastic discovery that possibly could’ve led to her disappearance. The element of suspense is there as Cronenberg is definitely a master of the genre in the way he builds up terrifying moments as well as trying to piece the clues of a mystery. Since the film is shot on location in London and its suburbs near the gas towers, he manages to make use of it without doing too much to the location for its past and present sequences.

Cronenberg would drop hints into the reveal while he was able to blur the line between past and present in the scenes in the third act. Yet, he is able to create something that is entrancing to look at as well as being able to keep the viewer guessing after the film has finished. Overall, the film is another remarkable achievement from David Cronenberg.

Cinematographer Peter Suschitzky does a superb job with the look of the London suburbs for its day and nighttime exteriors. Notably with the latter to help set a mood for the suspense as well as creating some wonderful lighting schemes for some of the interior settings to help maintain the dark tone of the film. Editor Ronald Sanders does an excellent job with the editing by utilizing a straightforward approach to the editing while taking on a methodical pace to build up the suspenseful moments of the film. Production designer Andrew Sanders does a nice job with the set pieces created from the drab room that Dennis lives in to the old look of the 1950s childhood home that he lived including his father’s shack near a garden.

Costume designer Denise Cronenberg does a wonderful job with the costumes from the more stylish 50s clothes the women wear to the more drab look of Dennis as an adult. Makeup artist Andrea Smith does a brilliant job with the different hair and makeup look for Dennis‘ mother, Yvonne, and the fantasy version of Mrs. Wilkinson. Sound editors David Evans and Wayne Griffith do terrific work with the sound from the intimate sounds of the interior locations to the more raucous atmosphere of the bar scenes. The film’s score by Howard Shore is truly divine for its very melancholic, piano-driven score with orchestral textures to play up some of the suspense and drama that occurs in the film.

The casting by Suzanne Smith is extraordinary for the small ensemble that is created which includes Lynn Redgrave as the stern Mrs. Wilkinson, John Neville as the fun and playful Terrence, and Bradley Hall in a very chilling performance as the young Dennis. Gabriel Byrne is excellent as Dennis’ father Bill who is a man that is charming but also brooding where he tries to deal with his son’s behavior. Miranda Richardson is spectacular in three different roles as Dennis’ very loving mother, the very brash mistress Yvonne, and in a very stylized approach to Mrs. Wilkinson character. Finally, there’s Ralph Fiennes in a harrowing yet mesmerizing performance as Dennis Cleg. While it’s mostly a sort of silent performance where Fiennes often mumbles throughout the film. There is a very haunting quality to his role as a man still traumatized over what happened as he is trying to figure out what happened as it’s one of Fiennes’ best performances.

Spider is an entrancing suspense film from David Cronenberg that features outstanding performances from Ralph Fiennes and Miranda Richardson. While it is definitely a film that is very different from a lot of Cronenberg’s other films in terms of style and presentation. It is still one of the most interesting in how Cronenberg is able to explore a man’s mental illness and his attempt to piece lost memories of tragedy. In the end, Spider is an extraordinary film from David Cronenberg.

I think this is one of the great, unspoken films of Cronenberg's body of work. Despite the fact that I predicted the ending about 15 minutes in, Spider really shook me.

Fiennes is indeed remarkable. Also, I can never get enough Gabriel Byrne.

Gabriel Byrne is awesome. I could watch that guy do anything. In fact, my favorite performance of his believe it or not is in Little Women. He was the last guy I would expect to play a character with sensitivity and charm.

I agree that the ending was a bit predictable but still, it managed to work.

Have you seen Byrne on HBO's In Treatment? He's remarkable in that.

Unfortunately, I haven't seen In Treatment. I have heard good things about it but it's hard for me to start watching a TV show to see if it's worth my time.

Loved the movie, it's such an accurate depiciton of the disease. Both Fiennes and Richardson were amazing in this.

@Sati-It's a better film than people want to give it credit for. Plus, it's among one of Cronenberg's more underrated features that has a truly outstanding cast.