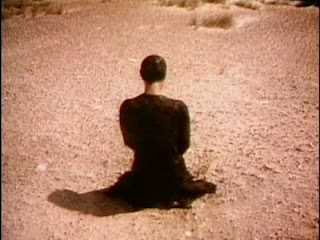 Based on the Greek tragedy written by Euripides, Medea is the story of a woman who seeks revenge on her husband following a betrayal. The 1988 TV film version is directed by Lars von Trier with an unreleased screenplay written by legendary Danish filmmaker Carl Theodor Dryer and Preben Thomsen. With additional work by von Trier, the TV movie would explore some of the themes of women and the sacrifices they’ve made that von Trier would delve into for his work in the late 1990s. Starring Kirsten Olesen, Udo Kier, Henning Jensen, Baard Owe, Solbjord Hofeldt, Preben Leidorrf Rve, and Ludmilla Glinska. Medea is a visually-arresting yet chilling TV film from Lars von Trier.

After being betrayed by her husband Jason (Udo Kier) following the Golden Fleece adventures as he is to be rewarded by King Creon (Henning Jensen) who gives Jason his daughter Glauce (Ludmilla Glinska). Medea (Kirsten Olesen) vows revenge for Jason’s betrayal as Creon and, later on, Jason each plea for Medea to make a case for her upcoming exile from the land. However, Medea has plans of her own as she gains refuge from oracle leader Aegeus (Baard Owe) in return to help him with wanting a child for himself and his wife. Before she goes to Athens with Aegeus, she would meet Jason one final time to make way for her revenge on him.

The TV film based on Euripides’ play is essentially a tale of revenge where a scorned woman makes a plan to seek revenge on her husband who betrayed her for power, wealth, and a younger woman. In turn, she decides to make a plan for him to suffer in the same way she has suffered in his betrayal but in the most extreme way. The script by Carl Theodor Dreyer and Preben Thomsen, with additional work by Lars von Trier, has a very theatrical feel to its dialogue and scene placements. Still, it’s all about this woman’s desire for revenge as she would do things to make her husband suffer where she would also sacrifice something to ensure that suffering. There’s not much plot to the script although there are some well-rounded characters. It all revolves around Medea and her own plans for vengeance.

While Lars von Trier’s direction has a great degree of visual style where some of it owes to the work of Dreyer. Some of the visual trick he uses such as gazing images of nature is definitely inspired by the works of Andrei Tarkovsky. While the film opens with text where von Trier claims he’s not trying to make a Dreyer film. Some of what von Trier is claiming is sort of true as he employs some hand-held work into some of the intimate moments and medium shots in the film. The landscape shots have this wide depth of field where it includes some aerial work involved. One of the key elements of style von Trier uses in the film are superimposed images to create this very surreal world that the characters live in as it works to maintain that sense of fantasy. Overall, von Trier has created a truly dazzling TV film that is provocative but also captivating.

Cinematographer Sejr Brockmann does an excellent job with the film‘s grainy yet monochrome cinematography that gives the TV film a very entrancing look with some dreary settings for the swamp scene where Croen tries to talk to Medea. Editor Finnur Sveinsson does a nice job with the editing that is quite stylized with its use of jump-cuts and fade-outs while maintaining a leisured pace for the TV film. Costume designer Annelise Bailey does a very good job with the period costumes made such as Medea‘s black dress to the more free-flowing dress of Glauce.

The special effects by Soren Buus does an extraordinary job with the visual effects created to add a surrealism to the fantasy sequences that occur between Medea and Jason. Sound editor Thomas Krag does a terrific job with the sound work to emphasize the chilling atmosphere of the exteriors to the hollow sounds of the castle Creon lives in. The music of Joachim Holbek is truly haunting from its brooding orchestral pieces to more ominous electronic touches to play up the dramatic portions of the TV film.

The cast for the TV film is wonderful as it features appearances from Solbjorg Hojfeldt as Medea’s nurse, Preben Lerdorff Rye as the king’s right-hand man Pedagog, and in the role of Medea and Jason’s son, Jonny and Richard Kilde. Notable supporting roles including Henning Jensen as the powerful King Creon, Baard Owe as rival king Aegeus, and Ludmilla Glinska as the innocent yet beautiful Glauce (whose voice is dubbed by Mette Munk Plum). Udo Kier is excellent as the ambitious Jason who betrays Medea for power as Kier brings a chilling approach to his performance though his voice is dubbed by another actor in Dick Kayso. Finally, there’s Kirsten Olesen in the titular character as Olesen brings a very dark yet cunning approach to the character that feels wrong as there’s also an entrancing sense of anguish over what she plans to do as it’s a very mesmerizing role from Olesen.

Medea is a dark yet very hypnotic film from Lars von Trier that features a script from the late Carl Theodor Dreyer. While the film is among one of von Trier’s weakest works of his career, it is still an interesting one in where he would get some of the visual ideas for his next film Europa and the themes he would explore in the late 90s-2000 Golden Hearts trilogy. In the end, Medea is a stellar yet ominous TV film from Lars von Trier.

Lars von Trier Films: The Element of Crime - Epidemic - Europa - The Kingdom I - Breaking the Waves - The Kingdom II - Dogme #2-Idioterne - Dancer in the Dark - Dogville - The Five Obstructions - Manderlay - The Boss of It All - Antichrist - Dimension (2010 short) - Melancholia - Nymphomaniac - The House That Jack Built - The Kingdom: Exodus - (Etudes)