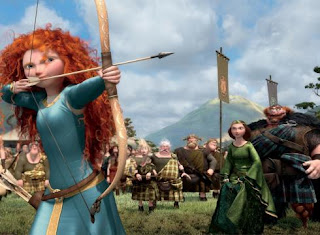 Directed by Mark Andrews, Brenda Chapman, and Steve Purcell with a screenplay by Andrews, Chapman, Purcell, and Irene Mecchi from a story by Chapman, Brave is the story of a Scottish princess who rebels against her mother over her duties as she turns to a witch for help only to cause problems. The film marks a departure of sorts from Pixar studios as the story is driven by a female heroine who tries to deal with her role as well as family as explores the complex relationship between mother and daughter. Featuring the voice cast of Kelly MacDonald, Emma Thompson, Billy Connolly, Julie Walters, Kevin McKidd, Craig Ferguson, Robbie Coltrane, and Pixar regular John Ratzenberger. Brave is a heartwarming film from Pixar Animation Studios. 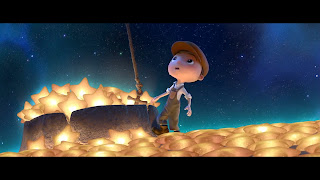 Written and directed by Enrico Casarosa, La Luna is a short film about a boy who goes on a journey with his father and grandfather where he discovers what they do. In his discovery, he finds a way to help them in their job as he would live up to the tradition of their work. It’s a true little gem that explores the dynamics between three different generations of men told from a young boy’s perspective. Featuring a wonderfully melodic score by Michael Giacchino, Enrico Casarosa’s La Luna is definitely among one of Pixar’s great shorts.

It’s 10th Century Scotland as Princess Merida (Kelly MacDonald) is being groomed to be heir to the throne as she is taught endlessly by her mother Queen Elinor (Emma Thompson). Merida however is unhappy with the on-going lessons to be a proper princess as she has already become a skilled archer ever since her father King Fergus (Billy Connolly) has given her a bow at a young age on the same day he lost his left leg to a bear named Mor’du. When Fergus and Elinor receive word that three clan leaders are willing to present their sons to marry Merida, Merida isn’t happy by the news as the clan leaders arrive hoping to discuss something where Elinor and Merida suggest that the three sons should compete in a contest to win Merida’s hand in marriage.

Instead, the contest has Merida taking control of what she wants to leading a huge argument between herself and her mother where Merida tears a part of Elinor’s tapestry family portrait. Running away with her horse Angus, Merida encounters a trail of Will O’ the Wisps where she finds a mysterious home that belongs to a witch (Julie Walters). After discovering what she is, Merida asks the witch to make a spell that will change her mother as the witch does. What happens would have Merida realizing that she is causing a lot of trouble as she returns to the witch’s home with a cryptic message on how to break the spell. Eventually, Merida realizes that the spell had to do with a legend her mother had told her years ago as she would try to find a way to break the spell before her father discovers what happened to his wife.

The film is essentially a story about young princess who defies her mother’s strict rules about how to be a princess by going to a witch to create a spell only to realize how much her mother really cares about her. It’s a film that explores the dynamic between mother and daughters where all a mother wants to do is prepare her daughter for the role she is set to play. Yet, she has to deal with the fact that her daughter isn’t ready to marry someone nor is she willing to do a lot of the things that is set for her as she tries to rebel against her mother. It’s a relationship that drives the film where it is all up to this young woman to discover the true meaning of bravery as she is someone who has to accept her fate as well as respect her mother.

The screenplay does play to a lot of the schematics of fairy tales as the story is quite conventional though the screenwriters do a lot more in fleshing out the characters such as Merida, Elinor, and King Fergus. There’s also an additional subplot of sorts that involves a story that Merida often has to be reminded of as it would reveal a lot of what would happen if the spell that she accidentally called for doesn’t break. It would add to the stakes that is raised up in the film’s second half where Merida has to play both princess and warrior in order to keep her mother’s secret hidden as well as deal with something far more sinister that relates to the legend that she knew as a child.

The direction of Mark Andrews, Brenda Chapman, and Steve Purcell is truly a feast for the eyes for the way they recreated the Scottish landscape with its mountains, hills, and various locations to play true to the world of 10th Century Scottish warriors. With some amazing scenery for those locations, the directors managed to infuse something that does play to the world of fairy tales while balancing the story with warmth and humor. The latter of which shows Pixar willing to be a bit raunchy but in a restrained, childish manner.

Through some amazing compositions and close-up of the characters, the direction of the film does exactly what is needed as well as setting up elements of suspense and humor that culminates into a real showdown between Merida and the curse that had been created. Overall, the team of Andrews, Chapman, and Purcell do a spectacular job in creating what is a truly enjoyable but also engaging for creating a story about mothers and daughters.

The editing by Nicholas C. Smith is excellent for creating elements of suspense as well as playing to the rhythm of the humor and the dramatic scenes of the film. Sound designers Gary Rydstrom and E.J. Holowicki, along with sound editor Gwendolyn Yates Whittle, do great work with the sound from the way arrows are shot to the clanging of swords as well as the growl of the Mor‘du bear in the film‘s opening prologue. The film’s music by Patrick Doyle is brilliant for its mixture of orchestral flourishes and traditional Scottish music that plays to the world of Scotland. Even as the film’s soundtrack includes amazing contributions from Mumford & Sons with Birdy, Julie Fowlis, Emma Thompson, Peigi Barker, and Billy Connolly.

The voice-casting for the film is extraordinary for the people that is assemble as it includes longtime Pixar regular John Ratzenberger and Patrick Doyle as a couple of guards, Sally Klinghorn and Eilidh Fraser as the voice of the family maid Maudie, Callum O’Neill and Steven Cree as a couple of Merida’s suitors, Peigi Barker as the young Merida, and Steve Purcell as the witch’s pet crow. Robbie Coltrane, Craig Ferguson, and Kevin McKidd are very funny in their roles as the clan leaders who offer their sons to marry Merida while McKidd also voices one of the suitors. There’s also some great non-speaking parts such as the horse Angus and Merida’s young triplet brothers in Harris, Hubert, and Hamish where they provide a lot of hilarious moments for the film.

Julie Walters is wonderful as a secretive witch who provides Merida a dangerous spell as it’s a very charming character that is filled with humor and intrigue. Billy Connolly is great as the boisterous King Fergus who tries to understand both his wife and daughter while dealing with the clan leaders as Connolly provides a lot of funny moments for his character. Emma Thompson is brilliant as the stern Queen Elinor who tries to deal with her daughter’s rebelliousness while trying to understand her as it’s truly Thompson in one of her best roles. Finally there’s Kelly MacDonald in a fantastic voice performance as Merida. MacDonald provides all of the right notes to display Merida’s angst as well as her humility to create a truly engaging character that lives up to the many great characters from Pixar.

Brave is an enchanting and dazzling film from the team of Mark Andrews, Brenda Chapman, and Steve Purcell. Thanks to an amazing soundtrack, an outstanding ensemble voice cast, and a heartwarming story, it is a film that definitely carries a lot of what is expected from Pixar in terms of storytelling and great visuals. Although it might live up to some of the great films from the studio, it does at least provide a female heroine who does live up to a lot of the great characters that Pixar has created. In the end, Brave is a touching yet incredible film from Pixar Animation Studios.

That twist in the middle of the flick just totally bothered me and I couldn't get past it. Still, I enjoyed this flick, I just think that Pixar dropped the ball on what could have been amazing. Good review Steve.

Nice review and glad you liked it! Can't wait to see this one, I'm listenining to the score right now and it's lovely.

Great review as always Steven! I can't wait to see it, unfortunately it won't come out in UK until August, so still one month and something left!

@Dan-I was able to be engaged by the twist because I felt it was crucial to Merida's character development.

@Thanks-I too enjoyed the score and for once, something by Mumford & Sons that didn't annoy me.

@Diana-Thanks. You'll definitely enjoy this if you're into strong female characters.