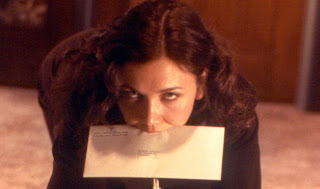 Hello humanoids. It's another blog news/blogging around post but one for the new year that is 2012. It's already starting off well as I'm nearly set to complete my Auteurs profile on Lars von Trier while my upcoming essay for Secretary is also in near completion. My essay for David Bowie's Hunky Dory is sort of half done as I'm trying to get ideas on what to write. Other than that and writing some reviews. I'm doing quite well though my output on script projects are still going quite slow as it's hard for me to come up with something.
In my last blog news post, I mentioned a list of projects that I was going to do for 2012. Among them was the James Bond marathon which I had hoped to start this month as I've already finished a review of the original Casino Royale TV episode which is currently in draft form waiting to be released. Well, I'm temporarily postponing it for sometime in the spring so I can gather some funds or whatever to get some Bond DVDs for me to watch for the marathon. Late last year, I was checking the TV guide schedule and they had a listing for a bunch of Bond movies playing and I had my DVR set to record these movies. All of a sudden, the channel Epix3 suddenly changed its format to Epix Drive-In where they ended up playing a bunch of B-movies and such.
Unable to deal with the situation and having no money to pay the entire Epix package where I could watch those Bond movies on HD. Yet, they're currently not playing Bond films as the moment as I've decided to wait out a bit so I can have more time to plan what I'm doing for the marathon. It's still going to happen as it is the 50th year of the release of Dr. No as it's on hold for now.
With the array of film reviews and various projects I'm doing at the time being, I'm still uncertain about writing music reviews for the time being. I guess I was just underwhelmed by the music scene in general as I've gained more disdain for what is happening in the world of popular music altogether. The recent Lana del Rey incident on Saturday Night Live confirmed for me that no one should ever buy in to the idea of hype. The last thing I had been trying to work on since November was a review of My Bloody Valentine's Ecstasy & Wine which I had already prepared but I never got around to writing it. I've shelved it for now so I can figure out what to do for the time being. I think that is all there is to say for now. Let's see what I've been enjoying lately in the world of the blogs.
Aside from a lot of year-end lists which have been fun to read. There's a lot going on that I've been enjoying. James @ Cinema Sights is currently watching some Godard films lately as he's been viewing Alphaville and Film Socialisme.
Edgar @ Between the Seats is doing a marathon on the BBS Productions that started the New Hollywood movement of the late 60s and 1970s with the very strange Monkees film Head.
Courtney @ Big Thoughts from a Small Mind revealed some of the films he's seen including for the first time ever, The Red Shoes as he is joining those who are becoming enamored with the films of Powell-Pressburger.
Marshall @ Marshall & the Movies has a very nice review of My Week with Marilyn which I still think is pretty good.
Ryan @ the Matinee asks Where did the Crowds Go?
Dan @ Dan the Man's Movie Review took a bullet for the bloggers and watched what is probably one of the worst films ever made in Bucky Larson: Born to Be a Star. I pray for his recovery.
Norma @ the Flick Chick lists her 10 Best Scenes of 2011.
Bonjour Tristesse has a great review one of the best foreign film of 2011 that I want to see in Once Upon a Time in Anatolia.
Laura @ City Lights reveals why she hates the term "chick flick".
Corey @ justAtad reveals his love for one of his favorite filmmakers in Andrea Arnold whose work I'm also interested in as I've only seen Fish Tank last year. Jessica of Velvet Cafe also explored Arnold by displaying an excellent review of Red Road.
Alex @ And So it Begins... has a fantastic review of one of my favorite films of 2011 in We Need to Talk About Kevin.
Finally, there's a couple of blogs that I want people to check out as I've become fond of these blogs that I've discovered. First is cinematic corner. from Sati who always some great reviews and lists that I enjoy reading. The other is Taste of Cinema by David Zou whose exploration into Asian cinema and thoughts on the Criterion Collection are a joy to read.
Well, that is all for today. In the meantime, I'll be finishing up all of my Lars von Trier-related material while getting set to do Wes Anderson as I've couple of old reviews of his films to re-edit. The only thing I'm planning to do for later this month and through February is catch up on some 2011 releases and watch some early Merchant-Ivory films along with Satyajit Ray's The Music Room which I got on the last Criterion sale. Until then, take care and remember to take the good with the evil. 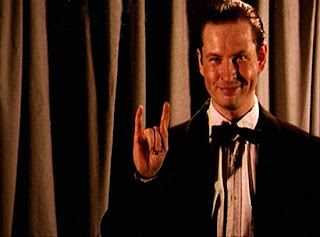 Hey there! Thank you for the nod!
Loved you put Trier in there. I take it as that his little aftertalk thing is included in the DVD version. Glad to see that. I watched it as it went on TV ages ago.

Thanks for the link love Steven! Much appreciated

Thanks for the mention! And thanks for recommending those two blogs, I'm always looking for new reads.

BTW, I had to Google Lana Del Rey, as I'd never heard of her before.

@Velvet-I enjoyed that part. After all, I love Lars. He's such a funny little guy. Even with that Nazi joke he did. That's not going to stop me from watching his films.

@Bonjour-After checking her out, you'll see why don't she's getting so much shit.

Right now, I'm kind of going on strike to protest SOPA. I think we all should just for the day.

Thanks so much for the mention! I love your blog and it's so cool you are reviewing all the movies from particuliar directors.

Thanks for the linkage my man! Much appreciated home boy.

@Sati-you're welcome. I love doing director-based stuff. It gives me a chance to fill in whatever films I've missed and find new discoveries.

@Dan-Anytime. I hope you recover from that awful film.

I do the same thing with actors. I'm currently going through everything with Michael Shannon in it.