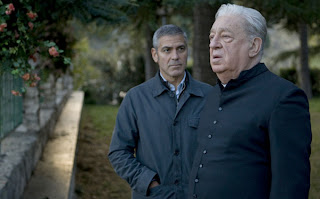 Based on the novel A Very Private Gentleman by Martin Booth, The American is the story of an assassin who hides in a small Italian town following a failed assignment as he awaits for orders while falling for a prostitute. Directed by Anton Corbijn and screenplay by Rowan Joffe, the film is a take on the assassin genre as it deals with the code of rules as well as the secretive world of being an assassin. Starring George Clooney, Violante Placido, Thekla Reuten, Paolo Bonacelli, and Johan Leysen. The American is a smart yet visually-haunting film from Anton Corbijn.

After a failed assignment in Sweden that left him killing his way out, Jack (George Clooney) arrives to Rome to meet with a contact about his next assignment. After meeting Pavel (Johan Leysen) in Rome, Jack hides out in the small Castel del Monte near the Abruzzo mountains where he would befriend a priest named Father Benedetto (Paolo Bonacelli). While pretending to be a photographer, Jack would spend his days alone where he calls Pavel as he takes an assignment. A woman named Mathilde (Thekla Reuten) wants Jack to build a rifle for an upcoming assassination target she is to embark on. Jack agrees to do the job as he continues to spend most of his days alone while having chats with Father Benedetto and sleeping with a local prostitute named Carla (Violante Placido).

While maintaining a low profile to build the gun and meeting Mathilde again who wants a few more specifications. Jack believes that there are people after him as he is convinced he is watched. Meanwhile, Jack finds himself falling for Clara as he is still believing that something isn’t right. After contacting Pavel again about the assignment, Jack decides he wants out as he prepares to face whatever is after him.

The film is about a top assassin who goes into hiding as he is facing death and aging while modifying a gun for another assassin. While hiding in this small Italian town, he confers with a priest about morality and life while falling for a local prostitute who is much smarter than she actually perceives to be. It’s a very unique take on the assassin film genre as the character of Jack is someone who likes to live a life of solitude and do things in secrecy. It’s part of what great assassins do as screenwriter Rowan Joffe understands that genre while he aims for a character study approach to this character. Jack, who also calls himself Edward, is a man with no past and no background other than that he is a skilled assassin who has just survived a failed attack on him as he’s on the run.

The lack of a conventional screenplay where there isn’t a lot of dialogue and intense action allows director Anton Corbijn to go for a more entrancing yet minimalist approach to the film. Utilizing haunting yet mesmerizing aerial shots of the towns and landscapes that is presented in the film while going for these eerie compositions such as Jack driving inside a tunnel. Corbijn aims for a very European approach to the film while simple two-shots and low-key compositions for the film’s dramatic portions. For the intense action scenes, Corbijn goes for a traditional approach to rhythm and suspense without presenting these scenes with a swift manner. The overall work that Corbijn does is truly fantastic in the way he creates some amazing shots while maintaining a sense of tension throughout to play up Jack’s sense of paranoia.

Cinematographer Martin Ruhe does a fantastic job with the film‘s colorful yet visually-lush cinematography from the eerie look of the tunnel in the film‘s opening credits to the vibrant red of Carla‘s room as well as the colorful lights of the nighttime exteriors of Castel del Monte. Editor Andrew Hulme does a nice job with the editing as he maintains a very methodical pace for the film to play up the silence of the drama as well as the intensity of the film‘s suspenseful moments. Production designer Mark Digby, along with set decorator Michelle Day and art director Denis Schegg, does an excellent job with the set pieces created such as Carla‘s room, Jack‘s sparse apartment, and the park that Father Benedetto frequents in a calm conversation he has with Jack.

Costume designer Suttirat Anne Larlarb does a very good job with the costumes as most of the men‘s clothing are quite straightforward while clothes of Carla and Mathilde are very fashionable to represent their personalities. Sound designer Paul Davies does a terrific job with the sound work from the sparse sounds of location including the church bell as well as the sound of gunshots during a target practice scene with Jack and Mathilde. The film’s score by Herbert Gronemeyer is amazing for the array of pieces created such as low-key piano pieces to play up the drama as well as eerie orchestral arrangements to play up the film’s suspense and more visually-haunting scenes.

The casting by Beatrice Kruger is superb for the ensemble that is created as it includes small appearances from Samuel Vauramo as a young Swedish man looking around, Filippo Timi as Father Benedetto’s mechanic son Fabio, and Irina Bjorkland as Jack’s Swedish girlfriend. Notable supporting performances include Johan Leysen as Jack’s secretive contact Pavel, Paolo Bonacelli as the sympathetic Father Benedetto, and Thekla Reuten as the very mysterious assassin Mathilde. Violante Placido is very good as Carla, a prostitute who befriends Jack while wondering about his secrecy as she is revealed to a very street smart girl.

Finally, there’s George Clooney in a marvelous performance as the assassin Jack. Clooney gives a more restrained performance that has him displaying a sense of melancholia and understated paranoia as a man who believes he’s at the end of his rope. It’s definitely Clooney at his best while proving that there’s more to him than being goofy and suave.

The American is a tremendous yet mesmerizing film from Anton Corbijn that features a terrific performance from George Clooney. While the film might not be everyone due to its pacing and European approach to storytelling. It is a film that does pay tribute to the world of assassin film genres with a bit of Sergio Leone’s western style in the mix. In the end, The American is a remarkable film from Anton Corbijn.

Wonderful review, I found the movie to be draggin a little here and there, but Clooney's work and overall feel of the movie are definetly worth seeing.

Well, the pacing is pretty much expected in a European film like this with very little dialogue. I actually liked it because it's so different from what is expected in that genre from an American perspective.

I give Clooney credit for taking risks and not playing the typical George Clooney archetype.