Originally Written and Posted at Epinions.com on 11/28/08 w/ Additional Edits. 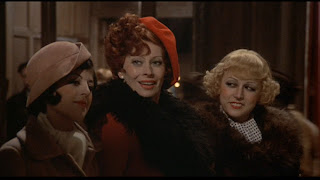 Directed by Federico Fellini with a script he co-wrote with Tonino Guerra, Amarcord ("I remember") tells the story of a life of a young man's life in a small, coastal Italian town during the Fascist era of 1930s Italy. A semi-autobiographical story based on Fellini's young life in his hometown is a coming of age tale as a young man explores the world in his hometown and his attraction to some of the exotic women in his town. Starring Magali Noel, Bruno Zanin, Pupella Maggio, and Armando Brancia. Amarcord is a wonderful and enchanting film from Federico Fellini.

It's springtime in town of Borgo as a festival to burn wood is happening. Attending are several locals including a sexy hairdresser named Gradisca (Magali Noel), a blind accordion player (Domenica Peterica), a big, buxom tobacconist (Maria Antonietta Beluzzi), and a nymphomaniac named Volpina (Josiane Tanzilli). Also attending are a young man named Titta (Bruno Zanin) and his construction foreman father Aurelio (Armando Brancia). Yet, Titta is a troublemaker as he's often surround himself with a group of trouble-making kids including Ciccio (Fernando de Felice) who pines for the Aldina (Donatella Gambini), the prettiest girl in school. Titta often gets himself in trouble with his father as his mother Miranda (Pupella Maggio) is convinced it's the boys he's around with that causes the trouble. Living with his little brother Oliva (Stefano Proietti), grandfather (Peppino Ianigro), and uncle Lallo (Nando Oferi), Titta is often the attention for his troubles while Lallo lives spending the money of his brother-in-law.

Titta's school life is filled with eccentric teachers as he and Ciccio often cause trouble and hang out with their friends Gigliozzi (Bruno Lenzi) and Ovo (Bruno Scagnetti) while they're often finding themselves attracted to women. Most notably Gradisca, as Titta goes to confession to confess his sins where he reveals his attraction to all of the attractive local women in the town. When a Fascist celebration occurs in the town, Ciccio has a fantasy where the face of Mussolini had him married to Aldina. The celebration is marred later in the night by a recording of anti-Mussolini remarks as Aurelio gets in trouble where he learned he got ratted out due to his anarchist past. The story about how Gradisca got her name is revealed while the local liar and street vendor Biscein (Gennaro Ombra) has claimed to had made love to a group of concubines from a sultan.

A family gathering to the local farm that would include Titta's mentally-ill uncle Teo (Ciccio Ingrassia) starts off fine until he climbs a tree and screams about wanting a woman as he refuses to get down. The event would reveal harsh family secrets while the entire town go on a huge boat trip to await the arrival of a huge cruise liner known as the S.S. Rex that the Fascists had built. After a foggy period for the town, a race through the town happens as both Titta and Ciccio have fantasies about being racers. Yet, Titta's night gets more exciting during an encounter with tobacconist that leaves him overwhelmed. When a big winter arrives into the town, it's greeted with a lot of excitement as Titta watches an extraordinary event while another would change his life forever.

The film is largely about memory as it's really about a young man's coming-of-age journey in the span of one year where he encounter all of these events and changes in his life as he would learn to mature into a man. Yet, the film is told through the perspective of Titta while there's stories about other characters and the town told through a lawyer (Luigi Rossi) who tells his story directly to the audience watching as the fourth wall is broken. Yet, the screenplay is told through a series of vignettes and small stories to give an idea of what life was like back in 1930s Italy during the Fascist era and through this young man's state of mind.

While the script that Fellini and Tonino Guerra creates is filled with whimsical stories that often blurs the idea of fantasy and fiction. It's Fellini's direction that is truly remarkable in its grand vision as well as its sense of nostalgia where it's clear he's telling something that is truly personal. Especially in his location settings where he's basing it on his own hometown with all of its eccentric-looking people and characters that are definitely from his own young life. With amazing visuals including the fog sequence, some of the town events, the boating scene, and even the wonderful, snowy sequence that involved a peacock is truly exquisite. Yet, Fellini's creates wondrous compositions that are definitely flamboyant, engaging, and full of life. While at the same time, he pokes fun at the era of Fascism while revealing the humor behind despite its oppressive nature. Overall, this is truly an amazing, whimsical by Federico Fellini.

Cinematographer Giuseppe Rotunno does a brilliant job with the film's camera work with intimate interior shots with great shadings of blue while a lot of the film's look ranges from the dark black of some of the town nighttime scenes to bluish evening shots, and even some amazingly, exquisite shots that are just gorgeous. Two sequences that Rotunno shot like the farm scenes with magic hour shots are gorgeous as is the snowy town scenes that are truly beautiful with the white clashing with the red hat or red dress that Gradisca wears. Fellini's longtime editor Ruggero Mastroianni does superb work with the film's sense of rhythm and transitional sequence breaks in using fade-outs and dissolves to help separate each vignette that goes on throughout the film. Yet, with the film's unique structure, Mastroianni succeeds in creating a style and feel that makes it easy to watch without losing sight of its main story.

Production/costume designer Danilo Donati and art director Giorgio Giovanni do wonderful work with the film's set design in the look of the Fascist celebration with the big head of Mussolini as well as the other town celebrations. Donati's costume work is wonderful for the look of Gradisca with her array of red dresses and a red hat to define her look. Sound recordist Oscar de Arcangelis does excellent work in capturing the raucous atmosphere of the events as well as the calm sounds of the countryside and winters. The music of longtime Fellini collaborator and composer Nino Rota is truly amazing with his flourishing melodies, sweeping arrangements, and joyful presentation. Rota's score for the film definitely lives up to his other work with Fellini in the past as it has this sense of romance and nostalgia. Rota also goes for humor with his whimsical pieces with the uses of the flute and accordion as it's definitely one of his greatest score compositions.

The cast is truly unique in its look and performances with standout appearances from Mario Liberati as a theater owner named Ronald Coleman, Franco Magno as a red-haired schoolmaster named Zeus, and as a group of teachers, Fides Stagni, Dina Adorni, Mario Silvestri, and Gianfilippo Carcano. Ferrucia Brembillia has a memorable appearance as a pistol-shooting Fascist while Stefano Proietti is good as Titta's little brother. Other memorable small performances that stand out are Josiane Tanzilli as the nympho prostitute Volpina, Ciccio Ingrassia as the mentally-ill Uncle Teo, Gennaro Ombra as the lying street vendor Biscein, Domenica Peterica as the blind accordion player, and Maria Antonietta Beluzzi as the big, buxom tobacconist who gives Titta an idea of what it would be like with a woman. Bruno Lenzi and Bruno Scagnetti are good as Titta's friends while Fernando de Felice is excellent as the plump friend of Titta who pines for Aldina, played by Donatella Gambini who is good as the object of affection.

Nando Oferi is excellent as Lallo, the slacker, conniving uncle who lives off of his brother-in-law and often encourages Titta to get into trouble. Pupella Maggio is wonderful as Miranda, Titta's mother who provides the wisdom and guidance for Titta to mature. Peppino Ianigro is excellent as the grandfather who often makes jokes about sex while Armando Brancia is amazing as the father who is strict with his son only because he's trying to get him to grow up. Bruno Zanin is great as Titta, the boy who is at the center of the film as he is the character that develops from his trouble-making schemes to maturing right at the end with such restraint and subtlety. Luigi Rossi is superb as the lawyer who tells stories about Rome and Italy in its past as he talks to the camera with such an amazing presence and grace that is enjoyable to watch. The film's most exciting and fun performance to Magali Noel, the exotic and sexy hairdresser who just oozes sexuality while bringing a lot of joy and warmth to nearly every scene she's. Noel's performance is truly fun as she definitely looks like she's having fun being the object of desire for everyone.

Amarcord is an ambitious, sprawling, yet beautiful film from Federico Fellini. Thanks to an amazing ensemble cast led by Magali Noel, Luigi Rossi, Bruno Zanin, and Armando Brancia, along with Giuseppe Rotunno's cinematography and Nino Rota's score. It's definitely one of the great films ever made though it will debate whether it's his best among other classics like La Strada, La Dolce Vita, and 8 ½. For audiences who want an idea of a time period with elements of nostalgia, romanticism, humor, and lots of fun, sexual innuendo. Amarcord is the film to see in all of its wonders from the great Federico Fellini.

It feels great to watch this film alongside I vitelloni,2 best films about one's hometown.As you mentioned,the farm scene as well as the snow scene are breathtaking.And the casting,wow,some really huge boobs.

Boobies are definitely a way to put asses in the seats. It's definitely one of my favorite Fellini films because of the ambition and story. I love his sense of humor and his approach to fantasy. There's an innocence to what he creates. That's why he is a master.