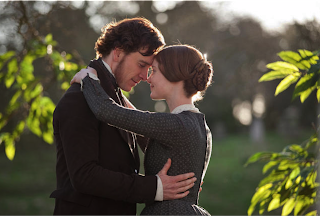 Based on Charlotte Bronte’s novel, Jane Eyre is the story of a young woman who had endured a life of cruelty as a child and later as an adult until she becomes the governess of a mysterious man she falls for. Directed by Cary Joji Fukunaga and adapted into script by Moira Buffini, the film explores a young woman’s plight as she goes from being in an unloving environment and then yearn for love in this mysterious man as Mia Wasikowska plays the titular role. Also starring Michael Fassbender, Sally Hawkins, Jamie Bell, Imogen Poots, Tamzin Merchant, and Judi Dench. The 2011 film version of Jane Eyre is an exquisite yet haunting film from Cary Joji Fukunaga.

Wandering around the moors and land, Jane Eyre arrives at a small cottage as she is under the care of St. John Rivers (Jamie Bell) and his two sisters Mary (Tamzin Merchant) and Diana (Holly Grainger). Staying temporarily at the Rivers home, Jane recalls her life as a child (Amelia Clarkson) as she had lived a life of cruelty in the hands of her aunt Mrs. Reed (Sally Hawkins). Taken to the very strict Lowood Institution under the supervision of the very abusive Mr. Brocklehurst (Simon McBurney), Jane befriends Helen Burns (Freya Parks) who helps Jane deal with her situation. More than a decade later, Jane leaves Lowood to become the governess for a house called Thornfield Hall. Meeting with its housekeeper Mrs. Fairfax (Judi Dench), Jane’s job is to teach the young French girl named Adele (Romy Settbon Moore) while helping out Mrs. Fairfax.

Walking to send a letter, a horse nearly runs over Jane as it’s rider is revealed to Thornfield Hall’s master Edward Rochester (Michael Fassbender). After meeting him later in the day, Jane deals with Rochester’s mysterious yet brooding persona as well as his questions about her life and such. When his room is on fire due to something mysterious as Jane saved him, the two forge a friendship as she asks Mrs. Fairfax about Rochester as she admits, she has no idea what he’s hiding. At a party held in Thornfield Hall where Rochester brings his fiancee` Blance Ingram (Imogen Poots), Jane observes what is happening as she has hard time contending with her feelings for Rochester. The unexpected visit of a man named Richard Mason (Harry Lloyd) appears where Jane assists Rochester in this ordeal.

After taking a break to visit her ailing aunt, Jane returns to Thornfield as she hears some news about Rochester and Ingram as Rochester reveals his feelings for Jane. Yet, their courtship ends due to the secret that Rochester has been hiding leaving Jane in despair over everything she’s endured in her life.

In this adaptation of Charlotte Bronte’s Gothic novel, it is a film told largely from the perspective of the titular character as she reflects on her time with this strange yet enigmatic man who would disappear for days and then come back unexpectedly. Notably as she has to deal with other weird things in this house and parts of her past where she endured abuse, neglect, and the idea of not being loved. Moira Buffini’s screenplay does follow the book faithfully while she does create a narrative that is more of a reflective one as it starts off near the end as Jane leaves a house and eventually arrives at the home of a young clergyman and his sisters. The script also allows the characters to be fleshed out more like the maternal Mrs. Fairfax as well as the kind but religious St. John Rivers. Yet, it is the relationship between Jane and Rochester that is the heart of the film as Buffini explores the emotional tension between the two as well as their own dark secrets.

The direction of Cary Joji Fukunaga is extraordinarily magical for the imagery he presents as well as the tension and atmosphere that surrounds the film. Wanting to be true to the Gothic tone of Bronte’s book, Fukunaga aims for a look where there aren’t a lot of direct colors as the palette goes for a very soft, naturalistic look with a bit of de-saturation as there’s no red or anything very bright that occurs. Shooting the film with some hand-held cameras and steady camera shots including some very wondrous movements to soak up the location and set pieces. Fukunaga also creates some striking compositions to capture the dramatic tension of the film such as the opening shot of Jane leaving while utilizing gorgeous wide shots to capture the beautiful yet stark images of the British countryside landscape. The overall work that Fukunaga does is truly enchanting in its look and tone.

Cinematographer Adriano Goldman does a tremendous job with the film‘s gorgeous yet ravishing cinematography filled with wonderful yet naturalistic interiors for some of the nighttime scenes in Thornfield Hall along with some beautiful exteriors of the British countryside including the skylines at it all plays to a certain color palette that emphasizes the film‘s Gothic tone. Editor Melanie Oliver does an excellent job with the film’s tight yet seamlessly fluid editing with the use of a few jump-cuts and straight transitions while playing up to the intensity of its suspenseful and dramatic moments.

Production designer Will Hughes-Jones, along with set decorator Tim Jones and art director Karl Probert, does an incredible job with the set pieces created such as the rooms in Thornfield Hall as well as drab yet oppressive dining hall at Lowood Institution. Costume designer Michael O’Connor does a fantastic job with the costumes from the very de-colored and dark clothes that Jane mostly wears to the more stately yet regal look of Rochester. Makeup and hair designer Daniel Phillips does a terrific job with the hair and makeup design for the characters from the braided hair of the women to the sideburns of the male characters.

Sound editors Matthew Collinge and Catherine Hodgson do an amazing job with the sound work from the intensity of the locations to the more sparse intimacy of Thornfield Hall that includes some chilly moments and layers of dialogue that occurs in scenes where Jane pines for Rochester. The film’s score by Dario Marianelli is definitely spectacular for its array of pieces ranging from somber piano themes to play up the romance to more low-key orchestral cuts to play up the drama in the film as it’s definitely one of Marianelli’s best scores.

Jamie Bell is wonderful as St. John Rivers, a clergyman who takes Jane in and becomes a friend while having hopes to become more than just her friend. Judi Dench is superb as Mrs. Fairfax, a sympathetic housekeeper who helps Jane with the things about Thornfield while being the one person who keeps Jane and Rochester grounded. Michael Fassbender gives a truly haunting performance as Edward Rochester with his calm yet brooding persona as well displaying a sense of torment that adds to everything that he’s trying to hide as it’s truly some of Fassbender’s best work as an actor.

Finally, there’s Mia Wasikowska in a truly divine performance as the titular character. Not afraid to display humility and anguish, Wasikowska brings a truly mesmerizing approach to the character who tries to maintain a sense of duty while dealing with her feelings for Rochester. The chemistry between Wasikowska and Fassbender is extraordinary for the tension they bring as Fassbender would often dominate with Wasikowska being very quiet. In more emotional scenes, the two restrain themselves from being very dramatic as it is about the anguish and love these two characters have for each other. Notably as Wasikowska maintains the restraint more than Fassbender as it is definitely the best performance she’s given so far in her young career.

It's easy to tell from your review that you truly enjoyed the film.

I have never read the book, so I am unsure where the film departed from it. In the movie it felt like the romance was a little rushed. I realize the scenes were probably compressing weeks, or even months, into minutes. Did it parallel the book, or did they cut chunks out of it?

On a related note, about 15-20 years ago I saw a movie titled Wide Sargasso Sea. It was the story of Rochester and others on Jamaica, before he came back to England and met Jane Eyre. I'm not sure it's worth your time to track it down because it's not a must see by any means, but if you are curious what they did with expanding the backstory of Jane Eyre, you may want to check it out.

I haven't read the book but did read the actual summary and I saw the old 1943 film this past weekend.

Then again, I try not to compare a film to its book as I think it's 2 different mediums.

Nicely written Steven. I loved the Gothic, almost horror-like atmosphere the film has and naturally, both Fassbender and Wasikowska are excellent in this surprisingly carnal version of the story.

It is a great film, isn't it? I thought that Wasikowska and Fassbender were extraordinary in their roles, and everything looked so beautiful. After so many adaptations, you'd think they'd struggle to come up with something that seems quite fresh, but it is perfect for a new generation.

Lovely review! I liked the film a lot, but I felt there was too little of Rochester and the relatinship between him and Jane was rushed. The movie should be longer, it felt like they cut a lot of scenes out of it.

@Sati-Well, you could be right but then again. Most adaptations are just deconstructions of a book. It should be noted that books and films are two different mediums. I would love more Rochester and Jane but what was presented in this film I felt was more than enough.

@Stevee-It's definitely among my favorite films of 2011 right now. The whole adaptation itself was a surprise considering that it's been done so many times. The chemistry between Wasikowska and Fassbender was truly gorgeous to watch. Only those two can do a lot with those characters and make it their own.