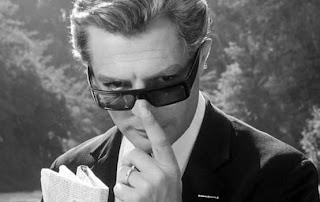 Directed by Federico Fellini and written by Fellini Ennio Flaiano, Tullio Pinelli, and Brunello Rondi, 8 1/2 is the story about a director who is trying to find meaning in his life as he prepares to create a sci-fi film. Surrounded by friends, mistresses, and his frustrated wife, the director finds his own life becoming part of surreal episodes that blurs the world between fantasy and reality. Playing the director Guido Anselmi is Marcello Mastroianni, who also played lead in Fellini's previous feature film La Dolce Vita. Also starring Anouk Aimee, Claudia Cardinale, Barbara Steele, Rosella Falk, Sandra Milo, Madeleine Le Beau, Mario Pisu, Guido Alberti, and Eddra Gale. 8 1/2 is a brilliant, surreal masterpiece from the always ambitious Federico Fellini.

After a strange dream involving traffic jams and floated like a kite, the life of Guido Anselmi is a mess due to pressures of creating a new project as he joins film critic Carini Daumier (Jean Rougeul) for a day in the park. There, he is transfixed by the appearance of a young actress named Claudia (Claudia Cardinale) though Carini doesn't see her. Unsure if what he saw is true, Carini wants to know about Guido's next project as Guido admits he has no idea what it's about as he's dealing with writer's block as he sees his friend Mario Mezzabotta (Mario Pisu) and his new girlfriend Gloria Morin (Barbara Steele). Leaving at a train station, Guido awaits the arrival of his immature mistress Carla (Sandra Milo) who is asking for an available part for her friend. Guido dreams about his parents (Giuditta Rissone and Annibale Ninchi) where his producer Pace (Guido Alberti) and Guido's wife Luisa (Anouk Aimee) appear in the dream.

Arriving to his hotel as he is dealing with Pace, more journalists and a French actress named Madeleine (Madeleine Le Beau) he's hired for the film. Guido is overwhelmed as a party with journalists, a mind reader (Ian Dallas), Pace and his girlfriend (Annie Gorassini) gets crazier where mind reader reveals a message in Guido's head. Guido has a flashback of his childhood with the mysterious message as he is dealing with more insanity while receiving a call from Luisa who is coming with her friend Rosella (Rosella Falk). Another strange meeting with his embittered production assistant (Mario Conocchia) involve Guido having another fantasy with Claudia whom he believes is his ideal lead. More surreal events would involve a meeting with the Cardinal (Tito Massini) over religious themes of the film leading to Guido recalling his life as a kid (Marco Gemini) during an encounter with a strange prostitute named Saraghina (Eddra Gale).

Luisa arrives with Rosella and Luisa's sister (Elisabetta Catalano) at a car show with their friend Enrico (Mark Herron) as Guido takes them to the spaceship he's building for his film. Still, Guido admits his doubts to Rosella about his failures as an artist and as a husband to Luisa. During a lunch with Luisa and Rosella, Carla appears much to Guido's horror as he has a dream involving all of the women in his life which starts out fun and later devolves into a messy haze. Back in the real world, Guido is dealing with screen tests for parts as Luisa gives him some horrifying news. Devastated by the news, Guido is sparked by Claudia's arrival as he reveals his fantasies that as he faces more harsh truths leading up to a press conference to announce what he is going to do about his new film project.

While Federico Fellini has known to use extravagance to enhance his story, in this film he uses the extravagance for a battle between reality and fantasy. While the story and feel of the film is different than his previous feature La Dolce Vita, this and 8 1/2 do share the similarities in the internal conflicts both played by Marcello Mastroianni. In La Dolce Vita, the character of Marcello is trapped in his own world of decadence only coming to the conclusion that there could be hope. In 8 1/2, there is a similar ending where Guido is trapped in his own world as a filmmaker where he is forced to his own compromises leaving him doubtful. The escape that Guido has is in his flashbacks and fantasy yet once they collide with reality, it becomes more troubling to him. Then there's the film's ending where his co-writer tells him something that he has to think about where Guido is forced to accept things and ends things only in a way that Fellini can make endings.

The film's script is brilliant in not just the struggles of dealing with making of a picture but the collision of fantasy and reality. Fellini's direction plays to the film's struggle in his extravagant presentation from the opening scene of Guido hanging in the air like a kite to the circus-like ending. Fortunately, the extravagance doesn't distract what Fellini aimed for since many of the fantasy sequences only come out in the simplest presentation where the only thing Fellini needed was a large location and lots of people. The screenplay does a great job in moving back and forth into fiction and reality while mixing the two in a few sequences. It's really in one way, a film about escapism through a man desperate to find answers in his own reality.

Helping Fellini in his visual presentation is Gianni Di Venanzo whose black-and-white photography and lighting schemes are wonderful to convey Fellini's harsh reality of the film world and the sunlight exteriors that shows Italy at its most beautiful. Art director Piero Gherardi does an amazing job in the lavish production of the exterior scene with the rocket while capturing the realness of the Italian, upper-class lifestyle. Gherardi also does work on the film's wonderful costumes with Leonor Fini whether it's the rich clothes of Carla, the black artiness of Gloria, the most sophisticated look of Luisa, or the innocent white of Claudia. Editor Leo Cattozzo does a wonderful job in tightening the film while helping it move easily in its back-and-forth world of fiction and reality. Longtime composer Nino Rota does a great job in the film's score that is filled with exuberant, circus-like arrangements and comedic textures while the rest of classical pieces from the likes of Richard Wagner, Gioacchino Rossini, Leo Ferre, and Pyotr Ilyich Tchaikovsky.

Finally, there's the film huge cast that is filled with an array of characters. Filled with such small performances from the likes of Olimpia Cavalli, Maria Antonietta Beluzzi, Hazel Rogers, Edy Vessel, Nadine Sanders, Elisabetta Catalano, Giuditta Rissone, Annibale Ninchi, Annie Gorassini, Mark Herron, Mario Conocchia, Tito Massini, and Marco Gemini as the young Guido. Another minor actress who gives a memorable performance as the Saraghina is Eddra Gale whose presence is amazing while Ian Dallas is also wonderful as the mind reader. Yvonne Casadei is also memorable for the role as one of Marcello's mistresses in a strange, fantasy sequence. Madeline Le Beau is also good as the French actress who feels like she's untalented while Guido Alberti is great as Guido's producer.

Mario Pisu is great as Guido's old friend Mezzabotta who seeks a new life with a new girlfriend while Barbara Steele is also great as Mezzabotta's girlfriend Gloria who brings an exciting presence. Jean Rougeul gives an excellent performance as Guido's co-writer who tries to figure him out while helping deal with his own doubts. Rosella Falk is excellent as Rosella who seems to be the only female aside from Claudia who can understand Guido's anxieties as she treats him like a sibling. Anouk Aimee is great as the intelligent but frustrated Luisa who loves Guido but is frustrated in his inability to be around her. Sandra Milo is amazing as Guido's sweet but selfish Carla who is engrossed in her own lifestyle and how she often frustrates Marcello with her own lifestyle. Claudia Cardinale is lovely as Claudia with her enchanting presence and eye-wielding innocence as she represents an angel of sorts for Guido only to realize that he disappoints her.

Finally, there's Marcello Mastroianni in another iconic performance as Guido. Bringing the same coolness and anguish that he did as Marcello in La Dolce Vita, Mastroianni goes more into that anguish to bring a character that artists can relate to. While the character is flawed, Mastroianni makes sure that Guido isn't too sympathetic since he does do selfish things around him like adultery while as an artist, he is somewhat irresponsible. It's a masterful performance from the late Mastroianni who brings a bit of humor and a lot of drama while making his character entirely memorable and likeable in the end.

While not as extravagant as La Dolce Vita, 8 1/2 is a wonderfully surreal and amazing film from Federico Fellini led by another iconic performance from Marcello Mastroianni. Of the films Fellini has made in his career, this film isn't just essential but a must-see for anyone interested in Fellini. Whether you're into the decadent La Dolce Vita or the extravagance of his later films, 8 1/2 is a film that everyone must see for anyone having trouble dealing with reality and fantasy.

awesome review,will try to give it a second visit and come back to say something about it.

It's one of those films that is worth re-watching because there's always something new to see. Besides, I need to get the Criterion 2-disc set on DVD.