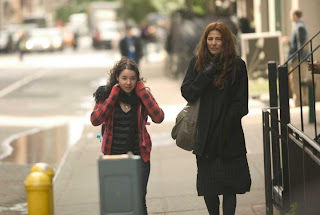 Written and directed by Nicole Holofcener, Please Give is the story about a couple and their daughter dealing with an aging neighbor as they befriend the woman‘s adult granddaughters. Meanwhile, one of the granddaughters try to deal with her lonely life as she starts dating while her grandmother’s neighbor tries to help out any way she can over her worry with the state of the world. Starring Catherine Keener, Oliver Platt, Ann Guilbert, Sarah Steele, Amanda Peet, and Rebecca Hall. Please Give is a clever yet intriguing film from Nicole Holofcener.

Kate (Catherine Keener) and Alex (Oliver Platt) are vintage furniture sellers who have a teenage daughter named Abby (Sarah Steele) who is going through her own growing pains. Living next door is an aging, cranky neighbor named Andra (Ann Guilbert) who is about to turn 91 as she is often cared by her kind yet lonely granddaughter Rebecca (Rebecca Hall). Kate often bumps into Rebecca as they would often have conversations as Rebecca is a radiology technician for breast cancer while her older sister Mary (Amanda Peet) is a cosmetologist. When Kate and Alex invite Andra, Rebecca, and Mary for Andra’s birthday dinner, Kate and Alex reluctantly reveal what they will do to Andra’s apartment when she passes away which doesn’t surprise the more cynical Mary.

With Kate worried about her daughter’s desire to purchase expensive jeans, she wants to help out those who really need things as she often gives money to the homeless and try to volunteer to help out other people. Alex meanwhile, becomes interested in Mary as he goes to her spa for a facial where flirtation ensues with the two. While helping out a patient named Mrs. Portman (Lois Smith), Rebecca meets her patient’s grandson Eugene (Thomas Ian Nicholas) as the two go out where she takes Andra and Mrs. Portman on a ride to the Catskills Mountains. Kate learns that some of the furniture she bought and sold is being sold once again by another competitor which only adds to her anxieties about the state of the world. With Abby more worried about her face and trying to fit in, Alex becomes upset over Kate’s issues while Mary starts to not help Rebecca in caring for Andra leading to a very drastic moment for all involved.

The film is about a group of people dealing with themselves as an old, cranky woman is about to likely to die as her neighbors want her apartment so they can expand their own. While the neighbors don’t want to do anything to hurt anyone, it does leave one of her granddaughters relieved about the whole other while the other is saddened by that prospect. For these four adults and a teenager, they’re all trying to deal with their own place in the world as characters like Kate and Rebecca are two women that really mean well in their generosity. Though it would often backfire for Kate who does upset Abby over the idea of giving away money. Rebecca is a bit more cautious as she has a hard time leading a normal life as she is devoted to taking care of her grandmother until she actually meets someone who is actually a nice guy.

While Alex, Abby, and Mary aren’t entirely selfish people despite their desires for wanting certain things. Alex is just trying to run a store while becomes fascinated by the idea of spa facials where he would have this flirtatious relationship with Mary. Mary likes this relationship although she is having her own issues over by often going to this clothing store and not buy anything. Mary may be the most un-likeable character of the entire film but Nicole Holofcener doesn’t portray her to be that overly-selfish as she does try to help Abby out with her facial breakouts. The script does have a lot of witty dialogue and humor as well as some captivating drama that occurs quite often. The only flaw with it is that it’s uneven due to the fact that there’s a lot of characters involved in their own worlds which doesn’t make the story as tight as it could’ve been.

Holofcener’s direction is quite understated and straightforward in the way she shoots conversations and scenes where characters are walking around the streets of New York City. Yet, the film starts off with these shots of women getting their breasts examined as it’s Holofcener making the audience uncomfortable by what she’s showing. It’s part of her strange yet quirky sense of humor as it revels in the theme of aging that Holofcener does touch on throughout the film. One of Holofcener’s gifts as a filmmaker is the way she directs actors where she can get them to relax and emote in certain ways. Even as she is shooting them on a sidewalk or in a room as she captures the energy of these conversations or allow them to react to their moments in a silent manner. Overall, Holofcener creates an engrossing yet humorous film about people and their willingness to try and be good.

Cinematographer Yaron Orbach does a nice job with the film‘s photography from the colorful daytime look exterior and interior settings to the look of Rebecca and Mary‘s home at night. Editor Robert Frazen does an excellent job with the film‘s editing by utilizing straight yet rhythmic cuts to play with the film‘s humor while maintaining a leisured pace for the film. Production designer Mark White, with art director Lauren Fitzsimmons and set decorators Kim Chapman and Kris Moran, does a brilliant job with the set pieces created from the homes of the characters to the furniture that Kate and Alex are selling in their shop.

Costume designer Ane Crabtree does a wonderful job with the costumes from the casual clothes most of the cast wear to the more stylish look of Mary and Abby. Visual effects supervisor Mark Russell does a good job in recreating some of the exterior of the mountains that Rebecca, Andra, Mrs. Portman, and Eugene go to see. Sound editor Lora Hirschberg does a fine job with the sound work from the exterior settings of the city to some of the intimate moments in some of the interior scenes in the film. The film’s folk-jazz score by Marcelo Zarvos is superb for underplaying the drama and humor of the film.

The casting by Jeanne McCarthy is brilliant for the ensemble that is created along with a slew of appearances from well-known actors such as Scott Cohen as Rebecca’s boss, Kevin Corrigan and Elizabeth Berridge as a couple of furniture sellers, Thomas Ian Nicholas as the very kind Eugene, and Lois Smith as Eugene’s lively grandmother Mrs. Portman. Ann Guilbert is great as the cranky Andra who always spout inappropriate lines about food and everything else while dealing with her old age. Sarah Steele is terrific as the 15-year old Abby who is obsessed with wanting expensive jeans while dealing with her own growing pains and her mother’s obsession with helping people out. Amanda Peet is excellent as the cynical Mary who doesn’t really like her grandmother and always say mean things while befriending Alex over their love of facial spa work.

Oliver Platt is wonderful as the calm yet curious Alex who is interested in Mary’s work while trying to deal with Kate’s own obsession with helping people as well as his furniture business. Rebecca Hall is amazing as the kind and helpful Rebecca who tries to deal with her grandmother as well as her own lonely life as she seeks to find love. Finally, there’s Catherine Keener in a fantastic performance as the well-meaning Kate who tries to deal with her business as well was wanting to make the world a better place. It’s a performance where Keener endures humility as well as the fact that she’s a mess because she can’t fix everything around her as it’s one of Keener’s top performances.

Please Give is a stellar and heartwarming film from Nicole Holofcener. Featuring a remarkable ensemble cast led by Catherine Keener, it’s a film that explores people trying to figure themselves out while helping out those they feel are in need of help. While it doesn’t have a much more concise narrative than Holofcener’s previous films. Holofcener makes up for it by creating real characters that audiences can relate to. In the end, Please Give is a charming film from Nicole Holofcener.

i LOVED this film. fantastic performances and nicely written and directed. one of my favorites from that year. i think it's pretty underrated.

I think the scene in the gym is the single best moment of Keener's career. What she does there (and how the instructor handles it) is remarkable. That rocked me to the core. Great review, yet again.

@Mr. Jeffery-So far, it's my least favorite of Holofcener's films but I'll take it over everything else that had come out that year.

@Alex-I agree about that scene. It's killed me because it felt real about that character and her own flaws as a person despite her good intentions.