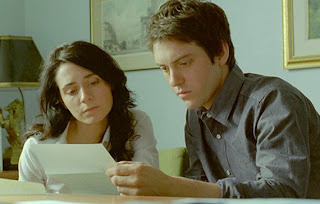 Based on the play Scorched by Wajdi Mouawad, Incendies is the story of twin siblings who travel to the Middle East following their mother’s illness as they uncover a mystery about their mother. Directed by Denis Villeneuve and adapted into script by Villeneuve and Valerie Beaugrand-Champagne, the film explores a relationship between two siblings and their mother as they wonder about their mother’s life in a treacherous land. Starring Lubna Azabal, Melissa Desormeaux-Poulin, Maxim Gaudette, and Remy Girard. Incendies is a harrowing yet mesmerizing film from Denis Villeneuve.

After suffering a stroke and eventually die, Nawal Marwan (Lubna Azabal) leaves some instructions to her twin adult children in Jeanne (Melissa Desormeaux-Poulin) and Simon (Maxim Gaudette) with the help of their mother’s former employer and notary Jean Lebel (Remy Girard). The instructions involves giving envelopes to the father and a mysterious older brother neither children ever knew. Jeanne decides to go to her mother’s birth country to find out more about her mother who lead a very troubled life ravaged by war as she had to give up her child to an orphanage after disgracing her family for having an affair with a refugee. Fulfilling her promise to her grandmother, Nawal leaves her village to live with her uncle and relatives and study at a university only to be destroyed by war.

With Jeanne trying to find information still trying to find information about her mother as she is revealed to be part of a radical organization following an incident when she traveled through the country to find her long-lost son. During that time, she helped assassinate a right-wing Christian leader that led to her 13-year imprisonment. With Simon and Jean arriving at the country to help Jeanne uncover the mystery, they find out what happened at the prison where it was revealed that she was raped by a torturer named Abou Tarek (Abdelghafour Elaaziz). Along with another revelation, Simon decides to make contact with someone who might know about the whereabouts of his half-brother as he secretly meets a warlord. The warlord reveals something that would be even more shocking for Jeanne and Simon as well as whereabouts.

The film is about two children uncovering the life of their mother as well as the secret about the father and half-sibling that neither of them had known. Both would eventually take different journeys to the Middle East of their mother’s homeland where they would also find out more about themselves and what their mother had to do for their safety as children. With a journey that takes place in both French-Canada and a fictional country in the Middle East, it’s a film that has a narrative that parallels with the journey of the two kids and the one their mother took to find her long-lost son.

The screenplay does a great job in creating these differing storylines together to create similarities to the journeys a woman and her two children would take. Notably as it’s revealed that they’re all quite flawed as they would also face things that would challenge them despite the different circumstances. For Nawal, she had to endure the horror of war as well as the trauma of being in service to fight against everything she had once believed in. For Jeanne and Simon, they face the ire of those who knew their mother as well as the secrets into the whereabouts of their father and half-brother. Though the mystery of identities do sort of get revealed near the third act which would allow the audience to sort of figure things out. The aftermath of the revelation does prove to be more devastating despite the fact that it’s not drawn out as it could’ve been.

Denis Villeneuve’s direction is truly entrancing in the way he presents the film as a whole by creating unique images that can play with what the viewers are seeing. Notably as a scene of Nawal walking out of her village is then cut into a scene of Jeanne, who looks similarly like her mother, walking towards a city as they both are wearing the same cross around their neck. With these vast yet evocative shots of Amman, Jordan to play as this fictional country, there is something quite beautiful yet eerie to the landscape as these siblings enter a world they admittedly don’t understand. Along with very eerie close-ups, haunting compositions, and intimate moments to capture some elements of drama or symbolism. Villeneuve creates an evocative yet chilling film about two adult siblings exploring their roots.

Cinematographer Andre Turpin does a brilliant job with the film‘s photography from the darker colors of the Montreal exteriors and interior buildings to the much brighter and evocative look of the Amman exteriors as well as the interior for its lighting schemes in scenes such as the prison scene. Editor Monique Dartonne does an excellent job with the editing in utilizing an array of stylish cuts to help create tricky transitions between the differing storylines in the film. Production designer Andre-Line Beauparlant does a superb job with the set pieces created such as Lebel’s office and hall of files as well as the looks of the prison that Nawal had to live in for some time.

Sound designer Sylvain Bellemare does a fantastic job with array of cannons and gunfire that occurs for some of the chilling scenes involving war in Nawal‘s storyline while maintaining a more sparse mix for the intimate moments involving Nawal‘s adult children. The film’s eerie score by Gregoire Hetzel is definitely a major highlight of the film for its heavy yet wondrous orchestral score that plays to the drama and suspense of the film. Notably as it features some operatic pieces that occurs in the film. Another piece of music used in the film are two songs by the band Radiohead from their 2001 album Amnesiac to maintain the haunting texture of the film as it’s another highlight of the film.

The casting by Constance Demontoy and Christelle Dufour is wonderful for the ensemble that is created as it includes notable small roles from Abdelghafour Elaaziz as the mysterious Abou Tarek and Allen Altman as notary friend of Lebel. Remy Girard is very good as the notary Jean Lebel who helps Jeanne and Simon in their journey while discovering more secrets about the woman he had known about for so many years. Maxim Gaudette is terrific as the more reluctant Simon who has a hard time keeping his emotions in check until he has to help his sister in uncovering the mystery realizing what his mother has been hiding. Melissa Desormeaux-Poulin is wonderful as the more determined Jeanne who takes part in the journey first only to endure the stories about her mother from women at her mother’s village as well as other dark secrets.

Finally, there’s Lubna Azabal in a very chilling performance as Nawal Marwan. Playing a woman who has endured lots of turmoil in her search to find her long-lost son as Azabal brings a very hypnotic approach to the way she looks at something while being very understated in parts of her performance as it is truly marvelous to watch.

Incendies is a remarkable yet unsettling film from Denis Villeneuve featuring a gracious performance from Lubna Azabal. The film is definitely a mystery that allows the audience to piece things while managing to keep on guessing towards the end. Notably as Villeneuve use tricks to get audience to dwell into the paralleling storylines that occurs in the film. In the end, Incendies is a superbly rich film from Denis Villeneuve.

Yet another great review, this time on one of the best films I've seen in recent memory. Incendies knocked me flat on my ass. After I saw it, I recommended it to everyone I know who moderately enjoys cinema. Glad to see you enjoyed it!

This was a surprise for me although I sort of figured it out halfway there. Still, it did enough to win me over. Notably the way it started with Radiohead's You & Whose Army?. Fucking love that band.

This is (and excuse my language) a fucking great film. That twist actually kicked me in the teeth.

@Stevee-Indeed it is a kick in the fucking teeth. Yet, it did work out in the end. How that nor Dogtooth didn't win is beyond me.

Great review, I have yet to see the film I love twists in the movies and I heard this one has a good one.

Funnily enough both my favorite foreign language films from 2010, prominently featured Radiohead songs. Incendies would have received my vote, Confessions is the other.

@Sati-It's worth it for the twist although I was able to figure it out halfway into the film. Still, it worked for me.

@Bonjour-It was the Radiohead songs that immediately drew me in realizing this isn't other some foreign film. Great use of it too.

Radiohead is my favorite band. I once wrote a screenplay based, in part, on the song How to Disappear Completely. Seeing them at Coachella in April. So pumped.

@Alex-Radiohead is coming to Atlanta on March 1 but it's unlikely that I'll go due to the fact that I don't have a lot of money right now. Plus, the rising gas prices has also forced things to happen.

Shame as they're my favorite band, second only to Nine Inch Nails.