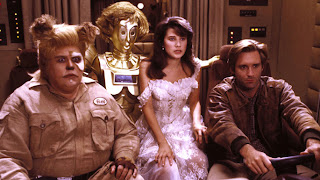 Directed by Mel Brooks and written by Brooks, Ronny Graham, and Thomas Meehan, Spaceballs is a spoof film about a mercenary and his half-man/half-dog who save a princess and her robot from the clutches of an evil henchman. The film makes fun of the Star Wars franchise as well as sci-fi films of the past including the world of advertisement and home video releases. Starring Mel Brooks, John Candy, Rick Moranis, Bill Pullman, Daphne Zuniga, the voice of Joan Rivers, George Wyner, and Dick Van Patten. Spaceballs is a hilarious and entertaining comedy from Mel Brooks.

After wasting all of the air in his home planet, President Skroob (Mel Brooks) devise a plan to take out all of the fresh air from Planet Druidia with the help of his henchman Dark Helmet (Rick Moranis). In Druidia, King Roland (Dick Van Patten) is celebrating the wedding of his daughter Princess Vespa (Daphne Zuniga) to a man named Prince Valium (Jim J. Bullock). Yet, Vespa runs away with her robot droid Dot Matrix (the voice of Joan Rivers) as Skroob and Helmet decide to kidnap her so that Roland can give them fresh air. With Vespa in danger, King Roland asks mercenary Lone Starr (Bill Pullman) to rescue Vespa. Starr asks for a million space-bucks in return so he and his half-man/half-dog friend Barf (John Candy) can pay their debt towards space criminal Pizza the Hutt (the voice of Dom DeLuise).

After jamming Helmet’s radar system, Lone Starr is able to retrieve Vespa, Dot, and their luggage as they try to evade Helmet’s ship through hyperspace. Helmet and his assistant Col. Sandurz (George Wyner) try to do the same but only pass them as Lone Starr’s Winnebago spaceship crash lands into a planet where they would meet wise master of the Schwartz in Yogurt (Mel Brooks). After teaching Lone Starr the Schwartz, Yogurt also learns the contents of Lone Starr’s medallion which he won’t reveal until later. After Vespa and Dot are captured by Helmet, Lone Starr and Barf go to Planet Spaceball to save them as Skroob is able to get the code to open Druidia’s planet shield. Lone Starr and Barf arrive to Planet Spaceball to save Vespa and Dot as they decide to stop Skroob and Helmet with help from the Schwartz.

The film is essentially a Star Wars parody where it doesn’t try to take itself too seriously as Darth Vader is re-created as a nerdy guy wearing a big black helmet. Luke Skywalker and Han Solo become this mercenary who travels in a space Winnebago with his half-man/half-dog friend while is willing to do anything for a shit-load of money. While there’s a lot of humor that allows Mel Brooks and his co-writers to make fun of Star Wars as well as other sci-fi franchises. There’s also an element of wit as Brooks allows himself to make fun of the world of the home video market in a scene where Helmet and Col. Sandurz track down Lone Starr by watching a video cassette of the actual movie they’re in while it’s still in the making.

It’s part of Brooks’ genius to satirize the film industry at a time when the home video market was becoming big. Another element of satire Brooks gets to point fingers at is the world of merchandising. The scene where Lone Starr, Vespa, and the gang learn about what Yogurt does. Yogurt reveals that he’s selling loads of products where the real money for the movie is made. Spaceballs the t-shirt, Spaceballs the coloring book. Spaceballs the flamethrower! (Kids love that!) It’s Brooks allowing himself to point fingers at the silliness of mass-marketing in films while doing it in a very comical manner.

Brooks’ direction is truly whimsical from the way he opens the film with this very long and exaggerated take on the big Spaceballs spaceship that Dark Helmet rides in. While the direction is quite straightforward for a sci-fi spoof, Brooks is able to create amazing timing for the comedy while not being afraid to go extremely silly. The fact that he often breaks down the fourth wall at times just adds to the hilarity. With these amazing compositions of the space scenes that is filled with lots of great visual effects and miniatures. Brooks creates a truly fun and imaginative sci-fi comedy spoof that does more than just entertain.

Cinematographer Nick McLean does an excellent with the film‘s photography from the very sunny yet stylish desert scenes to the wondrous interior lighting of the spaceships and Yogurt‘s cave. Editor Conrad Buff IV does a nice job with the editing by creating rhythmic cuts for some of the film‘s action sequences including some stylish cuts for the comedic moments. Production designer Terence Marsh, along with set decorator John Franco Jr. and art director Harold Michelson do great work with the set pieces created such as the Spaceballs ship interiors as well as the look of the Winnebago and Yogurt‘s cave.

The costumes by Donfeld are quite spectacular from the look of Lord Helmet‘s uniform including his big helmet that is also given a desert look to the wedding dress of Princess Vespa. Visual effects supervisor Peter Donen does an incredible job with the film‘s visual effects from the Schwartz-sabers and laser fire to the miniature spaceships made for some of exterior space shots. Sound designers Gary Rydstrom and Randy Thom do a fantastic job with the sound work from the sounds of the Schwartz-sabers and laser fire to .

The film’s score by John Morris is wonderful for the soaring orchestral pieces that is filled with bombastic string and percussion arrangements. The soundtrack includes a title song sung by the Spinners along with cuts by Maurice Jarre, Bon Jovi, the Pointer Sisters, Berlin, and Van Halen to play up the humor of the film.

The casting by David Rubin and Bill Shepard is terrific for the ensemble that is created as it includes appearances from Brenda Strong as a nurse, Stephen Tobolowsky as a guard captain, co-screenwriter Ronny Graham as a minister, Leslie Bevis as the interruptive Commanderette Zircon, Lorene Yarnell as the body of Dot Matrix, Jim J. Bullock as the narcoleptic Prince Valium, Michael Winslow as a sound effects-driven radar technician, Sandy Helberg as a deranged surgeon, a voice cameo from Michael York as creatures from another planet, and a hilarious cameo from John Hurt reprising his Kane role from Alien. Voice work from Dom DeLuise as Pizza the Hutt and Joan Rivers as Dot Matrix are very funny with the latter sporting some very funny one-liners. George Wyner is very good as the well-meaning Colonel Sandurz who tries to help Dark Helmet but either does the wrong things or ends up being smarter than his superior.

Dick Van Patten is also good as the regal King Roland who is desperate to save his daughter while revealing one of the stupidest code numbers ever. Daphne Zuniga is wonderful as the snobby Princess Vespa who tries to maintain her prestige while proving to be a total badass with a laser machine gun. Bill Pullman is great as the very scruffy yet no-holds-barred Lone Starr who becomes an unlikely hero. John Candy is hilarious as Barf, the half-man/half-dog who assists Lone Starr while saying some very funny lines. Rick Moranis is excellent as the villainous Dark Helmet as he often reveals his face to say smarmy one-liners while proving to be a very offbeat villain. Mel Brooks is fantastic in the dual role of the greedy yet neurotic President Skroob as well as the wise yet humorous wise creature Yogurt.

Spaceballs is truly one of the funniest spoofs ever created from the mind of Mel Brooks. The film is definitely one of Brooks’ most witty and very entertaining films as well as being something that is still funny through repeated viewings. Notably as it is filled with hilarious one-liners and moments that just keep people laughing while being a great homage to Star Wars and other sci-fi franchises. In the end, Spaceballs is a brilliant film from Mel Brooks that will make anyone wish for Spaceballs 2: The Search for More Money.

Brooks every parodied sci-fi book franchises. "Just one more Dune to go." "You said that three Dunes ago."

Mel Brooks needs to come back.

I actually prefer watching Spaceballs to the Star Wars movies themselves!

@Lone Starr-Who doesn't these days? Especially as they're constantly re-edited and given bad 3D conversion transfers.