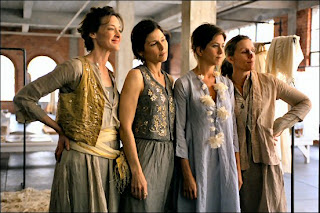 Written and directed by Nicole Holfocener, Friends with Money is the story of a woman who is struggling to maintain her finances by taking a job as a maid while her more financially stable friends as they all deal with personal issues in their life. The film explores the friendship of four women as they all try to help each other but also explore their resentments towards one another Starring Jennifer Aniston, Catherine Keener, Joan Cusack, Frances McDormand, Scott Caan, Jason Isaacs, Simon McBurney, Greg Germann, and Ty Burrell. Friends with Money is a brash yet very intriguing film from Nicole Holofcener.

After quitting her job as a teacher, Olivia (Jennifer Aniston) works cleaning other people’s houses for a living as her friends each live fantastic lives with husbands and kids. While Franny (Joan Cusack) wants to help out as does Christine (Catherine Keener) and Jane (Frances McDormand), Olivia politely declines as she often spends her time going to mall to take free cream samples and calling a former boyfriend (Timm Sharp) whom she’s still hung up on. Franny is a stay-at-home housewife who has money from a trust fund as she really wants to help Olivia out though her account husband Matt (Greg Germann) isn’t sure on the idea. Franny does help out Olivia with her personal life by setting her up with her young personal trainer Mike (Scott Caan) as the two begin a relationship.

Christine’s marriage to husband David (Jason Isaacs) is starting to fall apart as the two try to write a project together while getting a new upstairs floor built much to the chagrin of their neighbor. Jane starts to act out due to the small things happening to her such as being cut in front of a line or having someone take her parking space. Even as her husband Aaron (Simon McBurney) is trying to help her out as Christine suspects that he’s gay while he befriends another guy named Aaron (Ty Burrell). With Olivia struggling to have money problems as Franny still wants to help out. An upcoming charity dinner doesn’t excite everyone as Jane becomes erratic while Christine becomes overwhelmed by the house renovation. Even as Olivia feels like things aren’t going her way as she doesn’t enjoy her time with Mike.

The film is about four women trying to help each other with their personal lives as one of them is struggling with trying to maintain her finances without needing to borrow money from her friends. Throughout the film, this woman is dealing with the fact that her life isn’t going well as she is taking all sorts of jobs while her personal life has her resenting her friends because they’re married and have children. Yet, they’re life isn’t as well-adjusted as she thought they would do as one of them wants to help out but her husband just wants to spend money for his own reasons. Another is dealing with the renovation of a house as well as bickering with her husband over everything while another friend is having a breakdown due to all of the ills of the world around her.

Nicole Holofcener’s script deals with the lives of these women and their relationships with men as the Olivia character is the one trying to find love. While she is hung up on this man she had an affair with some years ago, she dates this very immature personal trainer who has just seen an old flame as their relationship becomes about sex though it ends up being unpleasant. Olivia is definitely the most interesting character of the film due to her situation as well as not being a charity case while she has this great line about all of these charity dinners that happens which really has a lot of truth.

While men like Matt, Mike, and David don’t really get much to do as opposed to sexually-ambiguous Aaron who sort of acts like a fifth woman. It does allow the rest of Olivia’s friends to explore their own faults as well as struggle with the posh world they live in. Of those friends, Jane is the most interesting as she is a clothing designer who has made a lot of money but is on the verge of a breakdown as she doesn’t wash her hair while starts to vent out at people who do the wrong things. Holofcener’s script is quite witty in exploring these characters and their flaws though there are a few issues with some of the characterization as some aren’t as developed or as interesting as some of the key parts in the film.

Holofcener’s direction is quite engrossing in the way she presents the film as she aims for a much looser hand-held style to the direction where the camera is a bit shaky but not overt. The compositions are quite straightforward as there is a bit of a cinema verite approach to the direction where Holofcener is always having the camera at the center or at the side of these conversations. Holofcener does create some funny moments that involves Jane’s outbursts or Olivia wanting to grab as many free samples of skin cream that she needs by going to different malls. Shot in Los Angeles and Santa Monica, Holofcener allows the location to be a character of sorts while not aiming for a postcard look to the film. The overall work that Holofcener creates is very engaging in the way she studies and observes the lives of these four women and their different lives.

Cinematographer Terry Stacey does an excellent job with the film‘s colorful cinematography that plays to the sunny world of southern California for its daytime exteriors while utilizing more low-key natural lighting for the nighttime interiors including the dinner scenes in the film. Editor Robert Frazen does a superb job with the editing in creating a loose style to its methodical pacing while using rhythmic jump cuts to capture the intensity of the conversations and action that occur in the film. Production designer Amy B. Ancona, with set decorator Maria Nay and art director Victoria Ruskin do a nice job with the set pieces created from the posh homes that Christine, Franny, and Jane live in to the more modest home that Olivia lives in as well as the other homes she cleans at.

Costume designer Michael Wilkinson does a wonderful job with the costumes from the more casual look that the women wear to the more modest look of Olivia and Mike to complement the different worlds the characters live in. Sound editor Cormac Funge does terrific work with the sound from the intimacy of the homes that Olivia cleans in to the busy atmosphere of some of the places the characters frequent at including the restaurants. The film’s score by Craig Richey is pretty good for its low-key folk-rock score filled with guitars and melodic keyboards as the music also includes some contributions by Rickie Lee Jones who also provides a similar score including the film’s opening song.

The casting by Jeanne McCarthy is brilliant for the ensemble that is created for the film. Notable small roles include Timm Sharp as Olivia’s former lover, Alejandra Flores as Christine’s maid, Ileen Getz as Christine’s neighbor, Ty Burrell as the other Aaron that Aaron befriends, and Bob Stephenson as a lonely man whose home Olivia cleans. Scott Caan is alright as the smarmy personal trainer Mike whom Olivia goes out with but barely helps her when she’s working. Jason Isaacs and Greg Germann are very good in their respective roles as Christine’s ambitious yet un-concerned husband David and Franny’s dismissive yet money-obsessed husband Matt. Simon McBurney is brilliant as Jane’s sexually-ambiguous husband Aaron who always try to help everyone out and be supportive while is probably unaware that he might be gay.

Joan Cusack is terrific as Franny who often wants to help out though she doesn’t want to be confrontational as she has a hard time trying to do good. Catherine Keener is excellent as Christine who is trying to write a screenplay while dealing with the renovation of her home and the constant bickering she has with her husband. Frances McDormand is great in a truly scary role as the erratic Jane who starts to act out over the frustrations of her life and everything around her as McDormand brings a lot of great humor to her character. Finally, there’s Jennifer Aniston in a remarkable performance as the lost and confused Olivia. It’s a performance where Aniston doesn’t play pretty while being a woman who is trying to get by while dealing with what she doesn’t have as she is trying to do things herself despite her friends’ desire to help her.

Friends with Money is a superb comedy-drama from Nicole Holfocener. Featuring a stellar ensemble cast that includes Jennifer Aniston, Frances McDormand, Catherine Keener, and Joan Cusack. It’s a film that revels into the lives of women as they deal with the idea of having everything or having very little as well as the struggle to find some sanity in their lives. It’s a film that is very witty as well as being provocative about the way the world works proving that not everything should be the way it is. In the end, Friends with Money is a funny yet sensational film from Nicole Holofcener.

The director also made "Please Give" ... which was significantly better than this.

Thank you although I do disagree with it being bland. I think it's a better film than people give it credit for. Notably as these characters are all flawed and aren't trying to be totally likeable.

Please Give is something I will watch tomorrow but the review might come later that day or the next.

I too think this is a superb dramedy - everything about it is authentic and real. I also enjoy not accurately predicting where a film is going. For example, I assumed McDormand's character was going to diagnosed with cancer, but no, she's just in a middle age funk.

I'm a huge fan of Holofcener's films, and this definitely did not disappoint. Great review.

@Alex-Thank you. This film actually surprised me a lot more than I expected. That's what I like about Holofcener is that she is willing to go into unexpected routes of drama and play with the expectations of the audience.