Originally Written and Posted at Epinions.com on 11/15/14 w/ Additional Edits. 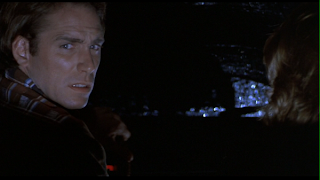 Blood Simple is the story of a bar owner who suspects about his wife's extramarital affair as he hires a private investigator to kill his wife. Written and directed by by Joel and Ethan Coen, Blood Simple is a dark, fascinating film filled with intrigue and suspenseful moments where everything has a strange tone while laying underneath it is the dark, idiosyncratic humor the Coen Bros. would later be famous for in later films. Starring Joel's future wife & Coen regular Frances McDormand, M. Emmett Walsh, Dan Hedaya, John Getz, Samm-Art Williams, and Deborah Neumann. Blood Simple is a fascinating, abstract film debut from the Coen Bros.

It's a dark night in Texas as a woman named Abby (Frances McDormand) and her lover Ray (John Getz) are driving through a dark night on the road where they suspect they're being followed. After a stop at a hotel, Ray gets a mysterious call where he thinks it's Abby's husband Marty (Dan Hedaya), a bar owner who Ray works for. With Marty staying in the bar watching everything while being controlled by lead bartender Meurice (Samm-Art Williams), he quietly has a meeting with a private investigator named Visser (M. Emmett Walsh), who shows him pictures of Abby with Ray. Marty is surprised that it was Ray and not some other punk. Later that night, Ray appears to Marty asking for some owed money while Marty refuses to pay him since he knew what was going on. Marty asks Meurice, who was talking to his friend Debra (Deborah Neumann) to watch out for Ray.

The next morning while Abby stayed at Ray's home, she sees the family dog where she is confronted by Marty where she breaks his finger and kicks him in the balls. Ray follows, as Marty knew that trouble was going to happen where he turns to Visser. Talking to Visser in his Volkswagen, he asks him to kill his wife and Ray for a huge sum of money while he's going out of town to fish at Corpus Christi. Abby meanwhile looks for a new apartment and asks Meurice to watch out for Ray and Marty in case things get into trouble. While Abby stays at Ray's for a night, quietly coming into Ray's house was Visser. The next day, Visser calls Marty about the job and says it's done where Marty returns later that night and sees some pictures. Visser notices the large amount of money where suddenly, a double-cross ensues.

Ray appears quietly after Visser had left to find what happened where he found Marty's body and tries to clean things up quietly so Meurice wouldn't hear. Ray takes Marty to his car and notices that he's still alive where he tries to kill him but not in front of witness where he buries him alive in the middle of a farm in Texas. The next morning, he calls Abby to tell her that he loves her and everything becomes more and more complicated. Noticing that his lighter is missing, Visser notices what happens in the scene and decides to go find Ray and Abby for his own reasons while Ray becomes paranoid that Marty could be alive after Meurice got a call from him. Abby goes to Meurice for help where everything becomes complicated as she wonders what has just happened, who killed whom and is Marty really alive and what are Visser's intentions?

While Blood Simple is more of a tribute to the film noir of the past, the film is really a reinvention of the film noir thanks to the quirky mind of the Coen Bros. With the directing of the film in tact, the film has some wonderful tracking shots that move very fast while giving out some stunning camera work in scenes involving a fan as the cast watch the fan move slowly as it zooms in very slowly. If the film's eerily directing style is seductive to watch, what's more amazing is the screenplay by the Coens where everything is straightforward but there's a suspense and momentum that is build up while its structure starts out as one thing but by the film's second half, it becomes more intriguing to watch and you're not sure what's going to happen and there's some moments that are very surreal as the Coens become one of the most innovative and brilliant writers in independent cinema at that time.

Helping out with the visual trickery of the film is cinematographer and future filmmaker Barry Sonnenfeld who brings a lush, ominous look to the film with its blue filters in some of the night scenes while the road scenes are even more creepy to look at. Sonnenfeld, like latter-day Coens cinematographer Roger Deakins, is a master at visual manipulation since the film plays up to its evocatively moody tone. With the fast-paced editing done by the Coens under their Roderick Jaynes moniker along with Don Weigmann that helps enhance the intensity of the movie.

With production designer Jane Musky help capturing the Texan look of the film for its comical and dark layers; the film looks great in its dark tone, even in its strange setting in Texas. Then there's dark, melancholic score of longtime Coens composer Carter Burwell who brings elements of stark piano notes and ominous textures to the film's moody world while idiosyncratic use of the song It's The Same Old Song by the Four Tops brings some comical relief to the movie.

Then you have the film's small but memorable cast that also included future Coens regular Holly Hunter in a voice cameo in one scene as she was originally slated to play Abby but gave it to roommate Frances McDormand since Hunter was doing a play at the time. Deborah Neumann is excellent in her one scene with Samm-Art Williams about the Ring of Fire that brings some strange, quirky humor that is a trademark of the Coens while Williams is memorable as the eye of the bar while standing out with his white Converse and playing the Four Tops in a country bar.

Dan Hedaya is wonderful as the bloodthirsty Marty with his brooding features and tone while he doesn't play the stereotype of an angry husband since he knows his place and his own reasons for why he drove Abby into having an affair. John Getz is excellent as well in his role as Ray for his quiet, confrontational performance, notably his scenes with Hedaya are filled with great dynamics while he has great chemistry with McDormand as Getz plays a role that is excellent despite being typecast later on in sleazier boyfriend roles in his career.

M. Emmett Walsh is the film's best male performance for his dark, complex performance since he serves as black heart and soul with his penchant for greed and sleaziness. Walsh brings a lot of dark humor to the film while his intentions remain very hidden while he comes up with the best lines. Walsh is wonderfully amazing as this role as Visser is one of his best performances. Frances McDormand truly delivers a breakthrough performance as the cheating wife Abby with her concerned face and complex innocence where we understand why she despises Marty while becoming more confused later on about Ray while becoming more of an innocent pawn in a game. McDormand makes the character grow from a scared, cheating wife to a brave woman seeking her own independence.

Blood Simple is a great debut from the Coen Brothers highlighted by the performances of M. Emmett Walsh and Frances McDormand. Thanks to its dark, moody tone and noir-like style in its camera work, music, and structure, Blood Simple is a film that reinvents the film noir while being one of the great debut films ever made by any filmmaker. In the end, Blood Simple is a chilling yet entrancing film from Joel & Ethan Coen.

I loved how suspenseful, dark, and slightly humorous this whole film was. Four Tops never sounded the same after this one either. Great review Steve.

I think the darkest humor in this film is the bullets in the gun,did you count it? it is a really interesting detail.

@Dan-Thank you. It's been a while since I've seen it. I love it though. I loved the use of the Four Tops as well.

@David-No, I didn't count that. It's been years since I've seen that film.

Very nice review of one of my favorite Coen Bros flicks. Such a fantastic debut for two of our finest living filmmakers. Definitely need to go back and revisit this movie.

@Alex-It needs a Criterion release or something so we can all revisit it.

It's one of those films that hasn't been on TV very much lately.

I actually like this film a little more than the better celebrated Miller's Crossing.

@Chip-I'm still not sure which is better, this or Miller's Crossing as I love both of them.